Speaking about the economic toll facing public schools, President-elect Joe Biden overstated the number of teachers who have been laid off since the start of the coronavirus pandemic.

"There’s already a circumstance where nationwide, because of the requirement of school districts, county offices, mayors, governors having to balance their budgets, they’ve already had to lay off 666,000 teachers," Biden said Nov. 18 during a virtual event with frontline workers.

"666,000 teachers have been laid off already since March," he repeated.

Biden is right that the pandemic has challenged public schools. Many teachers are at high risk for severe illness due to COVID-19, and many school districts are strapped for funds as they try to balance their budgets without more assistance from the federal government.

But the former vice president’s assertion that schools have laid off 666,000 teachers since March is inflated. The number he cited refers to the roughly 666,000 local government education jobs that went away between March and October, according to data from the U.S. Bureau of Labor Statistics.

Not all of those workers were teachers, and not all of them were laid off.

The Biden team did not respond to requests for comment.

Not all school staff are teachers

The Bureau of Labor Statistics provides data that shows net changes in the number of people employed in an industry from month to month.

For "local government education," an industry that primarily consists of jobs in public K-12 schools, the data shows that the number of workers dropped from 8,041,600 in March to 7,375,800 in October. That’s a net loss of about 665,800 workers. Between February and October, the decline was about 666,200 workers.

The latter number — 666,200 — was cited in a Nov. 10 report by Pew Charitable Trusts. But Pew described the figure accurately as a net decrease in local government education jobs.

"Those aren’t necessarily going to be teachers," said Elise Gould, a senior economist at the Economic Policy Institute who has written about public education job losses in the pandemic.

Michele Bachmann
stated on May 9, 2022 in an interview on Steve Bannon's "War Room" podcast
“The Biden administration is bringing amendments that would propose that all nations of the earth cede their sovereignty over national health care decisions to the WHO.”

A BLS spokesperson said industries such as local government education can contain hundreds of different occupations, from librarians and coaches to administrators and custodial or cafeteria employees. The agency doesn’t collect data that would show job losses just among teachers.

In 2019, non-instructional staffers accounted for roughly 30% of all full-time equivalent jobs in public elementary and secondary schools, according to the U.S. Census Bureau.

The second problem with Biden’s claim is that the 666,000 lost jobs are not all attributable to layoffs. Experts said there’s no data source to show a precise count of how many teachers have been laid off since the start of the pandemic. 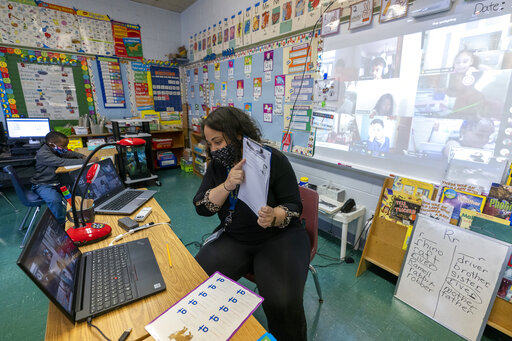 First grade teacher Megan Garner-Jones teaches students participating remotely and in person during the pandemic at School 16 on Oct. 20, 2020, in Yonkers, N.Y. (AP)

Faced with the health threat of COVID-19, reports show some teachers have also quit, taken leaves of absence or retired. A survey of educators that Education Week conducted in July found many teachers saying they were likely to leave their jobs this year due to the pandemic, although the outlet reported recently that it’s unclear how many actually stepped away.

One reason why there haven’t been more teachers laid off is that public sector layoffs often lag when recessions hit, said Kate Walsh, president of the National Council on Teacher Quality. Another reason is that many school districts are bound by contracts and laws that restrict when teachers can be notified of layoffs.

Experts expect more layoffs to hit teachers the longer the recession drags on.

Biden said, "666,000 teachers have been laid off already since March."

The 666,000 figure comes from federal data, but it doesn’t describe teacher layoffs. We don’t actually know how many teachers have been laid off due to the pandemic.

The 666,000 number reflects the net decrease in local government education jobs since March, but it’s not specific to teachers or job losses due to layoffs. It includes job losses by other school staff, such as cafeteria and custodial workers.

Chartbeat, "Teachers unions will have newfound influence in a Biden administration. Here’s how they might use it," Nov. 17, 2020

The Washington Post, "How covid-19 has affected school budgets so far — and what lies ahead without more federal aid," Oct. 7, 2020

USA Today, "Between COVID-19 and layoffs, schools may not have enough teachers to get through the year," Sept. 3, 2020

Education Week, "Thousands of Educators Laid Off Already Due to COVID-19, and More Expected," July 14, 2020

Kaiser Family Foundation, "About 1.5 Million Teachers are at Higher Risk of Serious Illness From COVID-19," July 10, 2020

Education Week, "What's Behind an Eye-Popping Drop in Education Jobs, and What's Next?" June 3, 2020

Email interview with Kate Walsh, president of the National Council on Teacher Quality, and Shannon Holston, director of teacher policy for the NCTQ, Nov. 19, 2020