Facebook posts
stated on October 3, 2020 in a series of images:
Says Donald Trump boarded Marine One "with a portable oxygen concentrator in his pocket with the nasal cannula going up his back, hidden in his hair and tucked under his mask."

President Donald Trump boards Marine One as he leaves the White House en route to Walter Reed National Military Medical Center after he tested positive for COVID-19 on Oct. 2, 2020, in Washington. (AP)

In one photo, President Donald Trump’s right blazer pocket is circled in red. In another, an arrow points to his ear. A final photo shows Trump’s back circled in yellow.

"Did Trump board Marine One with a portable oxygen concentrator in his pocket with the nasal cannula going up his back, hidden in his hair and tucked under his mask?" wrote a Facebook user in an Oct. 3 post.

A day before that post, Trump took a helicopter to Walter Reed National Military Medical Center "out of an abundance of caution" after he announced he and first lady Melania Trump had tested positive for the coronavirus. Conjecture and misinformation about the president’s condition took off on Instagram, Twitter, TikTok and Facebook.

Several posts were flagged as part of Facebook’s efforts to combat false news and misinformation on its News Feed. (Read more about our partnership with Facebook.) 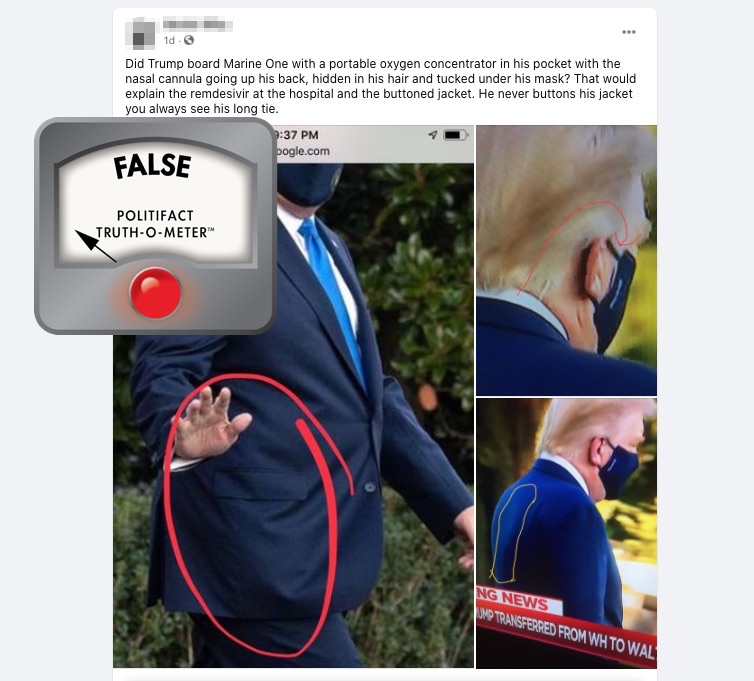 There is a lot of confusion surrounding Trump’s use of supplemental oxygen to treat his COVID-19 symptoms. But is there any evidence that the president boarded Marine One with a "portable oxygen concentrator?"

No — multiple fact-checkers have debunked the conspiracy theory, and video evidence refutes it. We reached out to the original poster for a comment, but we haven’t heard back.

The confusion stems from the Trump administration’s shifting timeline for when the president first tested positive for the coronavirus and whether he was administered supplemental oxygen.

Dr. Sean Conley, the White House physician, originally declined to say whether he had given Trump oxygen. But on Oct. 3, Conley told reporters that Trump was "fever-free and off supplemental oxygen." Several news outlets have since reported that Trump was given oxygen on the morning of Oct. 2 — before he left for Walter Reed.

"Yesterday morning we were real concerned with that," said White House chief of staff Mark Meadows in an interview with Fox News on Oct. 3. "He had a fever and his blood oxygen level had dropped rapidly."

But that doesn’t mean Trump had a portable oxygen concentrator when he boarded Marine One.

Other angles of Trump’s walk from the White House to Marine One don’t support the conspiracy theory. Take a closer look at the footage:

There does not appear to be anything in the right pocket of Trump’s blazer. And there are no tubes running up the president’s back to his nose. If he did use a portable oxygen concentrator, you’d be able to see tubes behind Trump’s ears or across his face.

We reached out to the White House and the Trump campaign for more information, but we haven’t heard back.

BuzzFeed News, "Don't Fall For This Viral Conspiracy Claiming Trump Carried A Hidden Oxygen Tank On The Way To The Hospital," Oct. 3, 2020

Lead Stories, "Fact Check: President Trump Did NOT Board Marine One For The Hospital With A Portable Oxygen Concentrator In His Pocket," Oct. 3, 2020

The New York Times, "Trump says he feels better, but his chief of staff says he is ‘still not on a clear path to a full recovery.’" Oct. 3, 2020