Viral image
stated on October 23, 2020 in an image on Facebook:
A photo shows Barack Obama in front of “cages” built during his administration to hold migrants.

"They built cages," Trump said. "They used to say I built the cages ... And then it was determined they were built in 2014. That was him. They built cages."

Over the next few minutes, the president repeated the line, "Who built the cages?" four times. After the debate, the line inspired a slew of widely shared memes on Facebook.

"Who built the cages, Joe?" reads text over an image of President Barack Obama wearing a hard hat and posing in front of what appear to be migrants inside an enclosure. The post was published Oct. 23 by Dinesh D’Souza, a conservative political commentator.

The post was flagged as part of Facebook’s efforts to combat false news and misinformation on its News Feed. (Read more about our partnership with Facebook.) Using CrowdTangle, a social media insights tool, we found hundreds of similar posts that have been shared thousands of times. 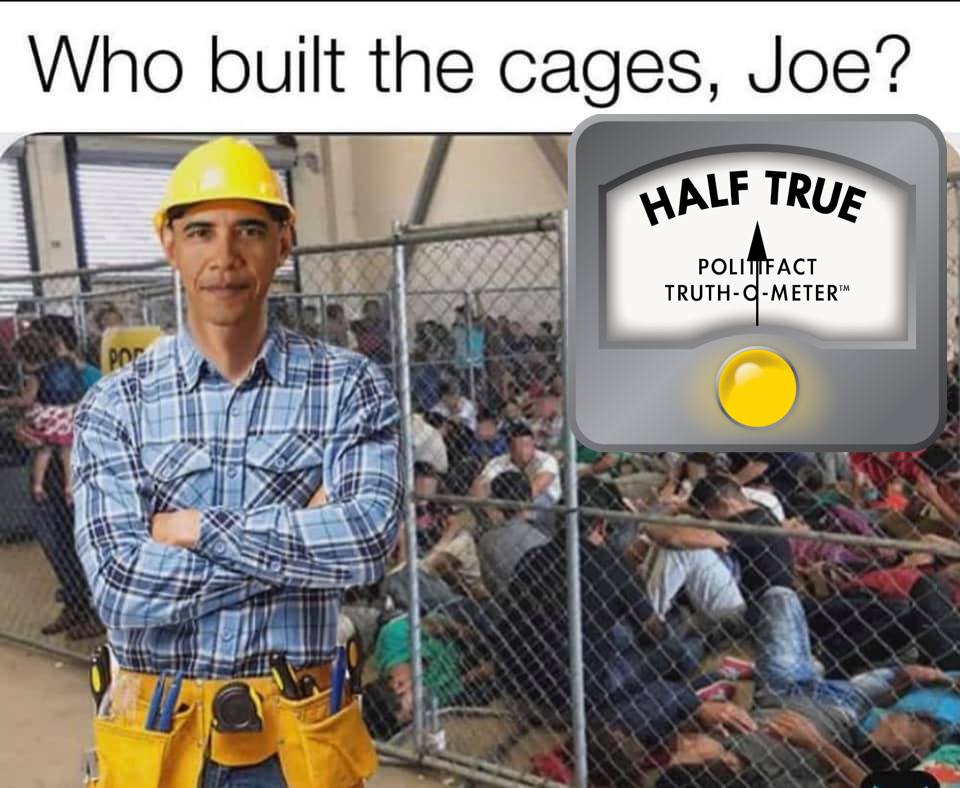 The Obama administration did hold immigrants in chain-link enclosures described as "cages" at border processing facilities. But the photo shared in the Facebook posts is not from his tenure. The image shows overcrowded migrant detention facilities in summer 2019 — during the Trump administration.

The image comes from a July 2019 Homeland Security Inspector General report on overcrowding at immigrant detention facilities in the Rio Grande Valley area of Texas. The report says the photo shows "overcrowding of families observed by OIG on June 10, 2019," in McAllen, Texas.

Facebook posts
stated on January 11, 2022 in a Facebook post
“The CDC director just said that 75% of ‘Covid deaths’ occurred in people with at least four comorbidities.”

A memo included in the report was addressed to Kevin McAleenan, who was acting Homeland Security secretary.

"Specifically, we encourage the Department of Homeland Security (DHS) to take immediate steps to alleviate dangerous overcrowding and prolonged detention of children and adults in the Rio Grande Valley," then-acting Inspector General Jennifer Costello wrote in the memo.

Still, the post has a point about the Obama administration’s use of chain-link enclosures along the southern border — the barriers seen in the photo were erected under Obama.

In 2014, the Obama administration faced an influx of migrants entering the U.S. illegally. Some Border Patrol stations were so overcrowded that agents used other areas, including warehouses, to hold migrants. Border Patrol used chain-link fencing to separate different groups, as documented in photos from that time period.

"We needed to have places like the one we set up temporarily in Arizona to house the kids until they could be placed with (Health and Human Services)," said Jeh Johnson, a former Homeland Security secretary during the Obama administration, in a July 2019 interview. "And the partitions you see, some call them cages, are meant to separate the women from the men, the girls from the boys. But these were temporary."

RELATED: Fact-checking Biden on use of cages for immigrants during Obama administration

The Facebook post uses a misleading image to make a point about immigrants in federal custody during Obama’s presidency. While the enclosures in the photo were built under Obama, the photo was not from his time as president — it’s from 2019.

PolitiFact, "Fact-checking Biden on use of cages for immigrants during Obama administration," Sept. 13, 2019

The Washington Post, "‘Kids in cages’: It’s true that Obama built the cages at the border. But Trump’s ‘zero tolerance’ immigration policy had no precedent." Oct. 23, 2020