Facebook posts
stated on September 6, 2020 in a text post:
Says Joe Biden “wants to put a 3% annual federal tax on your home.”

Democratic presidential candidate Joe Biden talks to neighbors gathered outside after he attended an event with local union members in the backyard of a home in Lancaster, Pa., on Sept. 7, 2020. (AP)

A  widely shared post on Facebook falsely claims that millions of homeowners across the country could see a tax hike if Joe Biden is elected president in November.

"Biden wants to put a 3% annual federal tax on your home," the Sept. 6 post says. "Do you want him for POTUS?"

The post, which has been shared thousands of times, was flagged as part of Facebook’s efforts to combat false news and misinformation on its News Feed. (Read more about our partnership with Facebook.)

If you’re reading this, you may be wondering: Is there some truth to the claim? 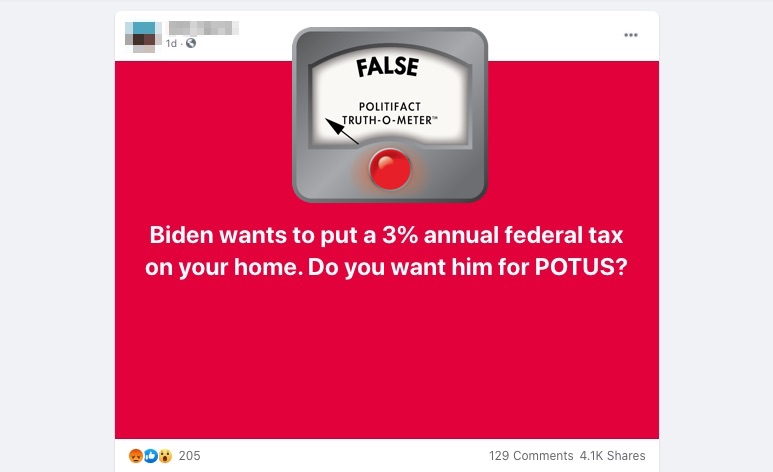 We reached out to the original poster for their evidence, but we haven’t heard back. We could find nothing in Biden’s platform or independent assessments of his tax plan that would indicate he supports imposing an annual federal tax on homes.

The effective property tax rate varies from state to state and city to city. Property taxes are a key source of revenue for cities and counties, and school districts tend to rely on them. Homeowners can pay these taxes as part of their monthly mortgage payments or to a local tax assessor on an annual basis.

The main federal tax that the Internal Revenue Service imposes on real estate is the capital gains tax. A capital gain is the difference between what someone paid for an asset, also known as the "basis," and what they sold it for.

Biden has not proposed a nationwide property tax — nor has he advocated raising taxes on Americans making less than $400,000 per year, as we’ve previously reported.

An analysis from the nonpartisan Urban-Brookings Tax Policy Center says Biden’s plan would primarily raise income and payroll taxes on wealthy Americans and corporations. The tax hikes would increase federal revenues by $4 trillion over the next decade, according to the analysis.

"Under his plan, the highest-income households would see substantially larger tax increases than households in other income groups, both in dollar amounts and as a share of their incomes," the report says.

Other independent groups have also examined Biden’s tax plan, including the Tax Foundation, the Penn Wharton Budget Model, the American Enterprise Institute and the Committee for a Responsible Federal Budget. Here are a few of the plan’s specific components:

None of those reports say Biden wants to impose a "3% annual federal tax on your home," as the Facebook post claimed.

"Based on our review of the campaign materials and our conversations with the campaign to try and clarify what their proposals are … there’s nothing there," said Gordon Mermin, a senior research associate in the Tax Policy Center. "We haven’t encountered anything that could be construed as a tax on homes."

On his campaign website, Biden says he supports creating tax credits for first-time homebuyers and low-income families who rent. We could find no mention of a nationwide property tax.

We reached out to the campaign for a comment, but we haven’t heard back.

Interview with Gordon Mermin, a senior research associate in the Urban-Brookings Tax Policy Center at the Urban Institute, Sept. 8, 2020

JoeBiden.com, "THE BIDEN PLAN FOR INVESTING IN OUR COMMUNITIES THROUGH HOUSING"