Eden McCarthy pets her dog Hina in the rubble of her home destroyed by the Almeda Fire on Sept. 10, 2020, in Talent, Ore. (AP)

Unfounded rumors about the cause of more than 100 fires on the West Coast continue to circulate on social media, but one post keeps coming up again and again.

"Oregon is on fire!" said Paul Romero in a Sept. 9 tweet, which has been shared more than 10,000 times. "Pallet Company in Oregon City confirmed Antifa arsonist on camera. Douglas County Sheriff has 6 ANTIFA arsonists in custody."

Romero is a former congressional candidate who ran to represent Oregon in the U.S. Senate this year. He lost the Republican primary election in May.

Screenshots of Romero’s tweet have been shared dozens of times on Facebook, where they were flagged as part of the company’s efforts to combat false news and misinformation on its News Feed. (Read more about our partnership with Facebook.)

Romero’s tweet is wrong — and there is no evidence that antifa, a broad coalition of left-wing activists, is to blame for the fires burning from California to Washington. 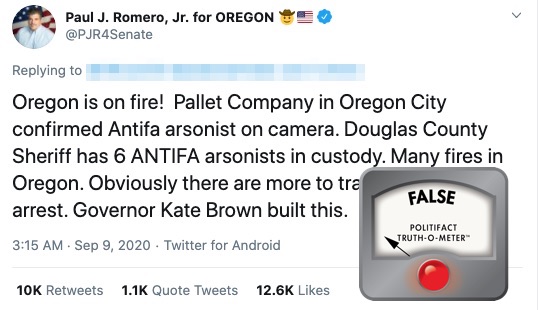 Still, many users posted the tweet alongside screenshots of conversations with friends and family members about the wildfires, which have killed at least 20 people so far. Several said they suspected antifa activists were to blame.

The Douglas County Sheriff’s Office has debunked the rumor that it arrested six antifa activists in connection with fires in the area, which is located south of Eugene, Ore.

"Rumors spread just like wildfire and now our 9-1-1 dispatchers and professional staff are being overrun with requests for information and inquiries on an UNTRUE rumor that 6 Antifa members have been arrested for setting fires in DOUGLAS COUNTY, OREGON," the sheriff’s office wrote in a Sept. 10 Facebook post. "THIS IS NOT TRUE!"

We asked Romero about the first claim in his tweet — that a "pallet company" in Oregon City, Ore., caught an "antifa arsonist" on camera. He said he couldn’t remember the name of the company, but a source told him it was caught on video surveillance and "they’re withholding it."

We called the only pallet company listed in the Oregon City white pages. It moved to a nearby city several years ago and said it hasn’t had a fire. A fire at a pallet company north of Oregon City did take place Sept. 8, but we could find no evidence it was caused by an antifa activist.

"This is not a conspiracy theory — this is a conspiracy," Romero said. "This is obviously a planned and coordinated event."

RELATED: Antifa activists did not start the West Coast wildfires

That claim, and Romero’s tweet, has been amplified by supporters of the baseless QAnon conspiracy theory. The rumors have inspired some armed groups to patrol fire-prone areas in Oregon.

But multiple police departments and fire officials across the state say there’s no evidence that the wildfires are part of a "politically-driven arson campaign." All evidence points to a mix of drought, high winds, historic heat and fires set by an influx of people trying to enjoy the outdoors during the coronavirus pandemic.

"Many of the fires currently burning in Oregon are still under investigation so I don’t have confirmation of cause," said Joy Krawczyk, a public affairs manager for the Oregon Department of Forestry. "That being said, I haven’t seen or heard anything that indicates that the statewide wildfires we’re battling are the result of a coordinated, politically-driven arson campaign."

Oregon Public Broadcasting, "Oregon’s human-caused wildfires are increasing and COVID-19 is getting the blame," Aug. 3, 2020