Facebook posts
stated on September 29, 2020 in a video:
Says Joe Biden was “wearing a wire” during the first presidential debate.

In the shaky video, Joe Biden adjusts his dress shirt. After he straightens the collar of his blazer, a thin shadow appears.

"There it is," a narrator says in the clip shared thousands of times on Facebook. "Biden’s wearing a wire. Why do you need a wire, bro?"

The video shows 13 seconds of the first presidential debate between Biden and President Donald Trump. It has spawned dozens of conspiracy theory posts on Facebook, which were flagged as part of the company’s efforts to combat false news and misinformation on its News Feed. (Read more about our partnership with Facebook.)

Did Biden get help during the debate? No — the posts are baseless, and other fact-checkers have debunked them. But they quickly took off on social media. 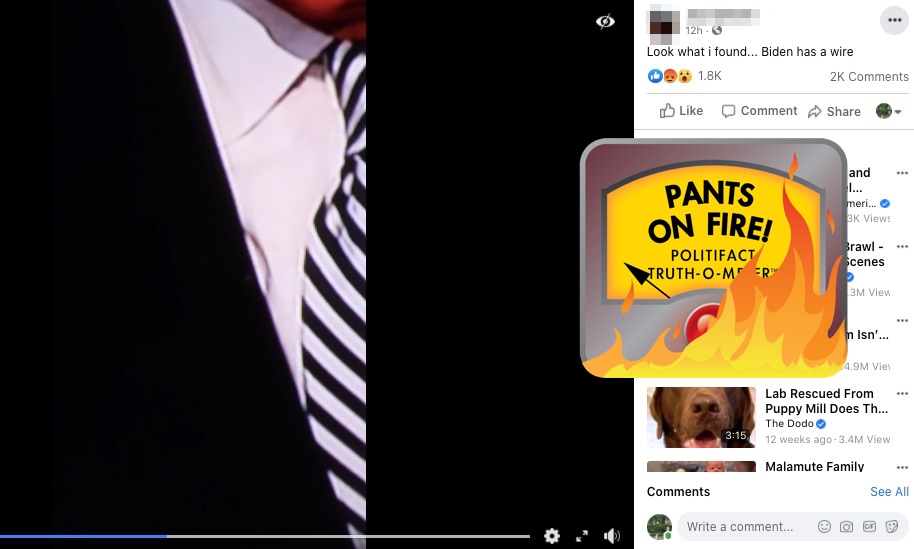 The video appears to have been posted around 9:45 p.m on Sept. 29. It was then shared in several Facebook groups dedicated to Trump and QAnon, a baseless conspiracy theory about child sex trafficking. As of Sept. 30, claims that Biden wore a wire had been shared in hundreds of Facebook posts, according to CrowdTangle, a social media insights tool.

Biden was not wearing a wire during the debate — the video shows a crease in Biden’s dress shirt, which is accentuated by the bright TV lights. Thin shadows similar to the one highlighted in the clip also appear on the left side of his shirt. 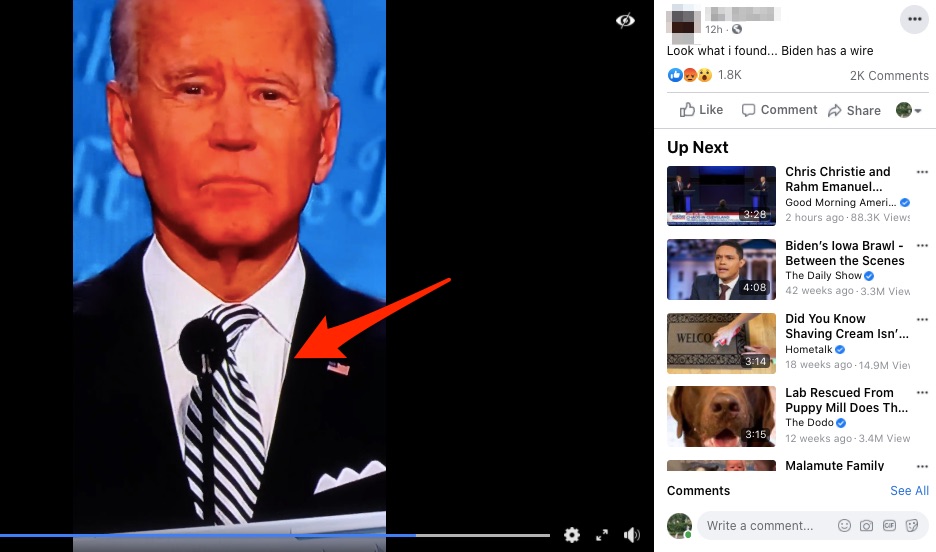 Instagram posts
stated on November 7, 2022 in Instagram post
Image shows that the New Mexico secretary of state counted more than 17 million registered voters in a state with a population of about 2 million.

Here’s a higher quality video of the interaction shown in the video. Notice how Biden creates the crease after reaching under his blazer:

Before the debate, another viral rumor claimed Biden had a device implanted in his skull that lets him hear someone on the other end give him answers to questions. We rated that claim Pants on Fire. Envoy Medical said its device "cannot secretly and wirelessly transmit conversations" and the Biden campaign refuted the claim.

This clip of Biden’s shirt is an outgrowth of that hoax, as well as years-old conspiracy theories about presidential candidates getting help during debates.

The New York Times wrote that conspiracy theories about presidential candidates wearing earpieces during debates have been around since at least 2000, when conservative radio host Rush Limbaugh accused former Democratic candidate Al Gore of getting answers fed to him through an earpiece on "Meet the Press." Similar rumors have surfaced in nearly every presidential election since then. We debunked a nearly identical claim about Hillary Clinton during the 2016 presidential debates.

Even if the claim were true, Biden probably would not benefit much from wearing a wire during a debate, the Times noted. Listening to directions in his ear while also paying attention to the moderator and Trump would be challenging.

Lead Stories, "Fact Check: Biden Was NOT Wearing A Wire During Presidential Debate; It's a Shirt Crease," Sept. 30, 2020

PolitiFact, "No, Biden is not getting help during the debate through medical device," Sept. 29, 2020