Tweets
stated on March 25, 2021 in a tweet:
"They’re unable to administer vaccines if the lockdown ends because the emergency ends with it.”

Stickers that say "I got vaccinated" are seen at Mercedes-Benz Stadium on March 25, 2021, in Atlanta. (AP/Anderson)

The U.S. and the U.K. approved the first COVID-19 vaccines for emergency use months ago, clearing the way for the millions of people to be inoculated.

Now, social media users are falling for posts that claim, wrongly, that the vaccines’ emergency approvals are a sign that government-imposed "lockdown" measures are here to say.

"The vaccine is authorised for emergency use only and still in live clinical trials until 2023," says a March 25 tweet from a British poster. "They’re unable to administer vaccines if the lockdown ends because the emergency ends with it. Hence why, lockdowns won’t end anytime soon." 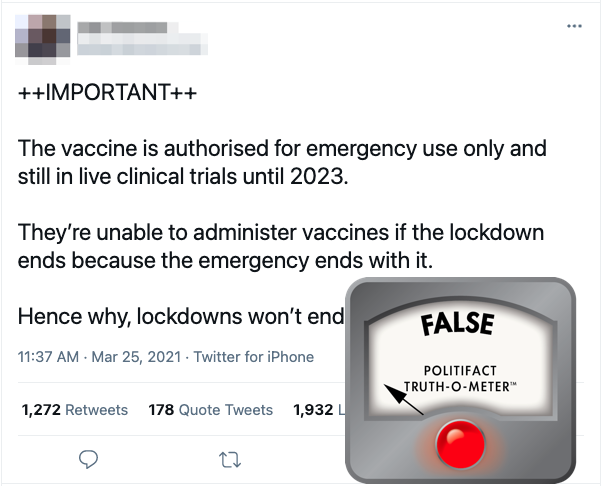 A screenshot of the March 25 tweet about vaccines and lockdowns.

That’s not true, public health experts said. In both the U.S. and the U.K., the authorizations for the vaccine are not tied to stay-at-home orders and other restrictions to limit the virus’ spread.

But the tweet spread widely online, with screenshots of it posted on Facebook and Instagram receiving thousands of interactions, according to CrowdTangle, a social media insights tool.

Social media users left comments on Facebook and Instagram indicating that they thought the claim was about the U.S., but the person who authored the original tweet told PolitiFact he was posting from the U.K. So, PolitiFact spoke to experts and government regulatory agencies from both countries. 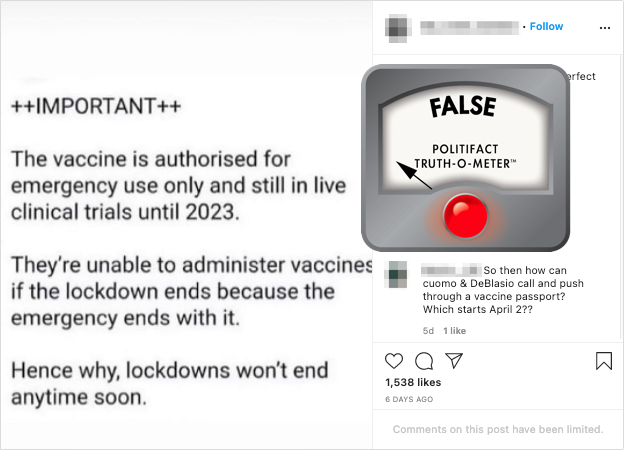 We found that no matter which side of the Atlantic Ocean you’re on, it’s inaccurate to say that "they’re unable to administer vaccines if the lockdown ends."

Asked for evidence to support the claim, the person behind the tweet did not provide any. He later said in a direct message on Twitter: "To be clear, I have no idea if this is correct or not."

The state of the pandemic

One problem with the tweet is the claim that "lockdowns won’t end anytime soon."

The U.K. is starting to ease the restrictions imposed by law in January to limit gatherings and minimize the virus’ spread — restrictions that news outlets have referred to as a lockdown.

But in the U.S., there is no nationwide lockdown and never was. Masks are currently required in about half the states, but businesses across the country are mostly open, and no state is enforcing a mandatory curfew or stay-at-home order, according to the New York Times.

"The U.S. government hasn’t locked anything down," said John Grabenstein, associate director for scientific communications at the Immunization Action Coalition.

The main problem with the tweet, however, is the inaccurate claim that lifting restrictions would mean losing the ability to continue vaccinating the population against COVID-19. There is no connection between lockdowns and vaccine administration — in either country.

In both the U.K. and the U.S., regulators granted emergency use authorization to manufacturers such as Pfizer after their COVID-19 vaccines were proven in trials to be safe and effective. The manufacturers will continue monitoring participants in their final clinical trials, as the tweet says.

"Each of the companies wants to get full licensing," Grabenstein said, adding that they are "well on their way" toward doing so. "The government wants them to earn their license."

However, the emergency use authorizations that greenlighted the vaccines don’t make the U.S. and U.K. "unable to administer vaccines if the lockdown ends," experts agreed.

Emergency use authorizations in the U.S.

In the U.S., stay-at-home orders and other restrictions are handed down at the state and local levels, while the emergency use authorizations for the Pfizer-BioNTech, Moderna and Johnson & Johnson vaccines were provided by the U.S. Food and Drug Administration, a federal agency. 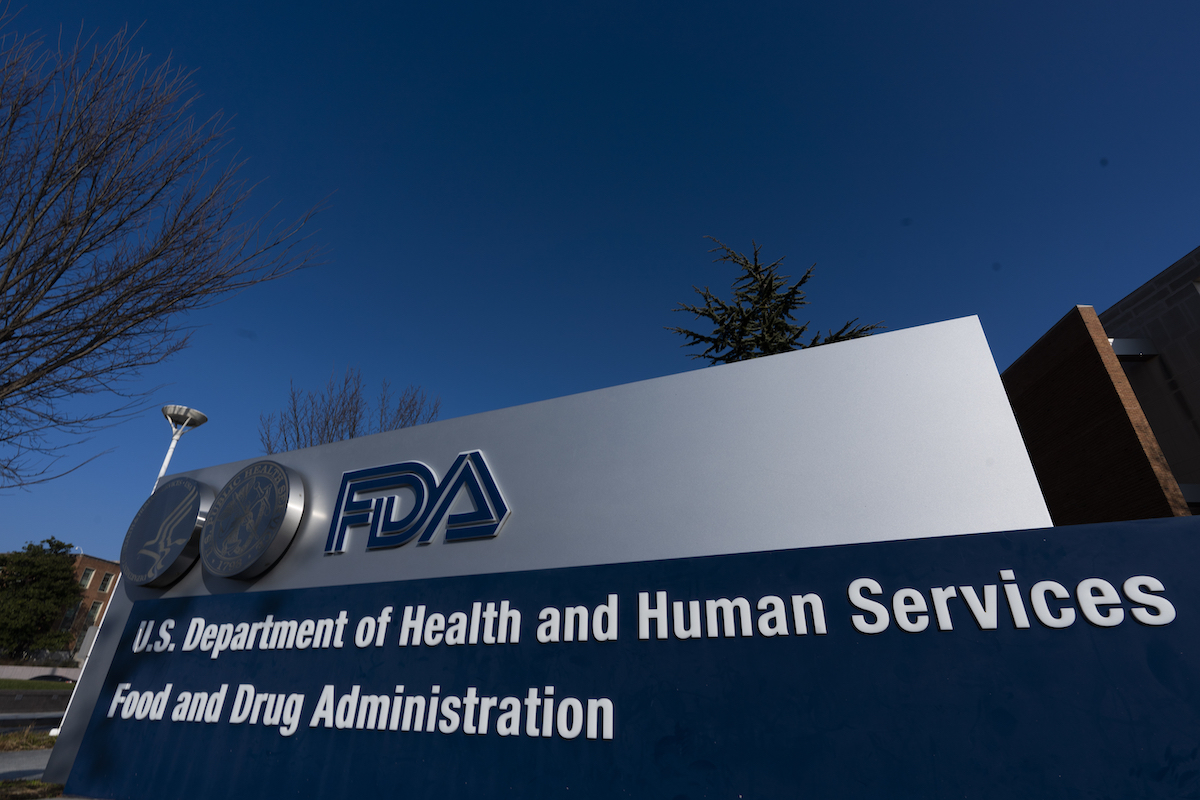 The emergency approval has "nothing" to do with lockdowns, said Andrew Noymer, associate professor of population health and disease prevention at the University of California, Irvine.

Instead, emergency use authorizations are temporary licenses granted while manufacturers collect more data and apply for full licenses, Noymer said. The FDA can grant them if the health and human services secretary has declared that a public health emergency justifies it.

Alex Azar, the secretary under the Trump administration, made such a declaration Feb. 4, 2020.

In a statement to PolitiFact, the FDA said that unless they are revoked, the emergency use authorizations will remain in effect until the public health emergency declaration is lifted.

In 2009, for example, the FDA granted several emergency use authorizations related to the swine flu, but the country never locked down.

Emergency use authorizations in the U.K.

In the U.K., regulators at the Medicines and Healthcare products Regulatory Agency granted emergency approval to vaccines from Pfizer, Moderna and Oxford University.

Such temporary licenses are allowed under British law during a public health emergency and while the full licensing process runs its course. In 2020, the law was amended to make them "as similar to a usual marketing authorization as possible," an MHRA spokesperson said.

The COVID-19 restrictions constituting a lockdown, however, were voted on by Parliament. As in the U.S., lockdowns have no bearing on those emergency approvals, experts said.

"I am 99.9999% certain that emergency use does not equal a period of lockdown, said John Edmunds, professor of epidemiology and population health at the London School of Hygiene & Tropical Medicine, adding that the concept of emergency use has been around for years.

It wouldn’t make sense for any government to "bind its hands" by tying lockdowns to the ability to continue administering vaccines, Grabenstein added.

The MHRA’s conditions for authorizing the COVID-19 vaccines say the approvals "will be valid until expressly withdrawn by MHRA or upon issue of a full market authorisation by the MHRA."

Given that language and other language on the MHRA’s website, the duration of the temporary license appears to be within the MHRA’s discretion, said Christopher Newdick, a professor of medical law and contract law at the University of Reading.

"It is not tied to the duration of the emergency lockdown described by the COVID regulations," Newdick said. "So the licensing status of the vaccines is subject to a different range of considerations to do with safety and efficacy and a different timescale."

Social media posts said "they’re unable to administer vaccines if the lockdown ends because the emergency ends with it."

That’s inaccurate in both the U.S. and the U.K., where emergency approvals were granted to vaccine manufacturers separate from any decisions to impose restrictions meant to thwart the virus. The person behind the original tweet admitted: "I have no idea if this is correct or not."

WUSA9, "VERIFY: What's the difference between Emergency Use Authorization and FDA approval?" March 26, 2021

Reuters, "Fact check: It is standard practice for vaccine safety monitoring to continue after approval," Feb. 12, 2021

U.K. Department of Health & Social Care, "Government response: consultation on changes to the Human Medicines Regulations to support the rollout of COVID-19 and flu vaccines," Oct. 16, 2020

U.S. Food and Drug Administration, "FAQs on Emergency Use Authorizations (EUAs) for Medical Devices During the COVID-19 Pandemic," Aug. 18, 2020

Statement from the U.K. Department of Health and Social Care, April 1, 2021

Statement from the U.S. Food and Drug Administration, March 31, 2021

Email interview with John Edmunds, professor of epidemiology and population health at the London School of Hygiene & Tropical Medicine, April 1, 2021

Email interview with Christopher Newdick, professor of medical law and contract law at the University of Reading, April 1, 2021

Email interview with Andrew Noymer, associate professor of population health and disease prevention at the University of California, Irvine, March 31, 2021