TikTok posts
stated on March 7, 2021 in a TikTok post:
A video shows Kim Jong Un calling Joe Biden a "thug," a "coward," and "mentally unstable" in a speech.

A viral TikTok video purporting to show North Korea’s Kim Jong Un bashing President Joe Biden as a "thug," a "coward," and "mentally unstable" is not what TikTok users are claiming.

The video shows a 31-second clip from an October 2020 speech Kim gave during a military parade ceremony celebrating the founding of his political party. But the video’s English subtitles are not an accurate translation of what Kim actually said in his speech. 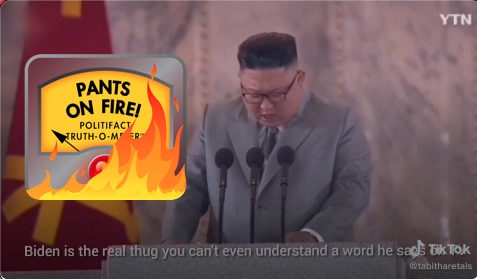 Here’s what the TikTok video claims Kim said, via its subtitles:

"Joe Biden is a weak president and an insult to North Korea. He is the thug letting protesters burn buildings down. Trump and I still have a good relationship. Biden is a coward. He is more worried about coronavirus and makes America weak. Biden is the real thug. You can't even understand a word he says on TV. He is very mentally unstable."

Here's what the Kim actually said, according to a translation from Newsweek:

"To all the people of this entire country and soldiers of the Korean People's Army on this October anniversary, to the public safety officers and the Worker-Peasant Red Guards and members of the Red Youth Guards, to the delegates of the 75th anniversary celebration ceremony and citizens of Pyongyang, to the military officers and units participating in this military ceremony for this glorious October anniversary ..."

Samuel J. Kim, an assistant professor of Korean translation and interpretation at the Middlebury Institute of International Studies, reviewed the TikTok video for PolitiFact and said Newsweek’s translation of the North Korean leader’s remarks is accurate.

"The subtitles are completely fabricated," said Kim, the Middlebury professor, of the TikTok video. "Not one word or idea is consistent with what is being said. In fact, the video is just the opening lines of a speech in which (Kim Jong Un) is simply addressing his audience."

Neither translation shows Kim talking about Biden or the U.S. during this address.

During the final presidential debate before the 2020 election, Biden called Kim, Chinese President Xi Jinping and Russian President Vladimir Putin "thugs." But the video circulating on TikTok does not show Kim insulting Biden in kind, despite what its subtitles suggest.

We rate this TikTok video Pants on Fire!

Join PolitiFact LIVE on May 10-13 for a festival of fact-checking with Dr. Anthony Fauci! Register today >>

The National Committee on North Korea, "Speech at the Military Parade Celebrating the 75th Anniversary of the Founding of the Workers’ Party of Korea," Oct. 10, 2020