President Joe Biden, then a candidate for president, worked the grill during the Polk County Democrats Steak Fry on Sept. 21, 2019, in Des Moines, Iowa. (AP/Neibergall)

One day after President Joe Biden pledged to cut U.S. greenhouse gas emissions in half, Fox News and Fox Business Network personalities repeatedly and baselessly claimed that the move would also force Americans to say goodbye to hamburgers and steaks.

"To meet the Biden Green New Deal targets, America has to, get this, America has to stop eating meat," said Fox Business Network host Larry Kudlow, a former economic adviser to President Donald Trump, on April 23. "No burger on July 4. No steaks on the barbecue."

Biden’s climate plans do not include restrictions on red meat consumption, a White House official confirmed to PolitiFact. Biden never mentioned red meat when he announced his plan to reduce U.S. greenhouse gas emissions by 50% to 52% below 2005 levels by 2030, a move that would double the U.S.’s commitment under the 2015 Paris climate agreement.

But across several Fox News and Fox Business Network programs, the story told was different. Hosts such as Kudlow and Fox News’s Jesse Watters wrongly claimed that Americans would have to take steaks off their grills in order for the U.S. to hit Biden’s target, while the networks’ chyrons and graphics gave the same false claims a visual flair.

One Fox News graphic, for example, said "Biden’s climate requirements" would "cut 90% of red meat from diet" by holding Americans to "max 4 lbs per year" and "one burger per month." 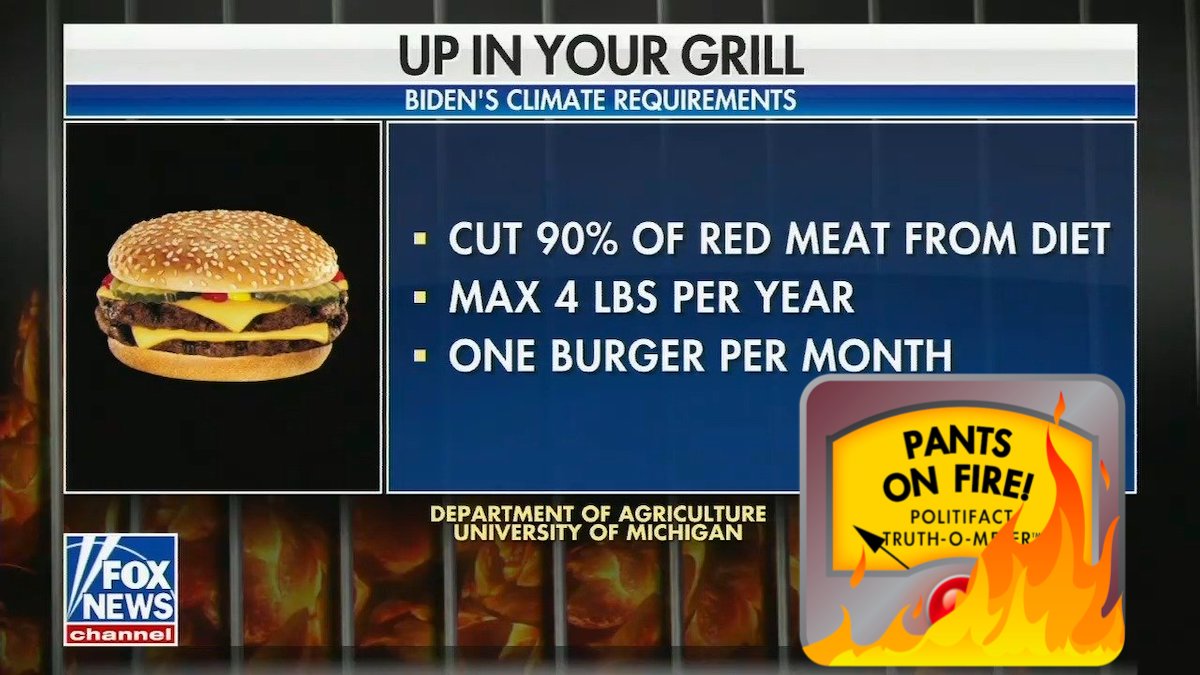 A screenshot of an inaccurate Fox News graphic about Joe Biden's climate plans. The graphic aired April 23 on "America Reports."

The false claims about Biden restricting access to meat originated with a Daily Mail article that linked Biden’s goals to an unrelated January 2020 study on meat consumption. The article speculated that "Americans may have to cut their red meat consumption by a whopping 90%," citing a University of Michigan study that had no link to Biden’s plan.

"The study was published in January 2020, when Trump was still president, so it had nothing to do with Biden or his climate change plan," said Tulane University professor Diego Rose, one of the study’s three co-authors. "It's all just sensational goo from ‘Fox & Friends.’"

"The study shows that if we eat less meat, especially beef, we could substantially reduce our dietary carbon footprint. But that change in behavior is a choice that individuals will make."

In a separate statement, co-authors Martin Heller and Gregory Keoleian of the University of Michigan explained that one hypothetical scenario the study considered was a 90% reduction in beef combined with a 50% reduction in other meats. They found that such a change would reduce "diet-related greenhouse gas emissions associated with agricultural production" by 50%.

"But this is not a specific recommended policy for achieving a 50% reduction in U.S. carbon emissions," Heller and Keoleian said.

How the claims spread on Fox News

The false claims about Biden’s climate policies cropped up on social media after the Daily Mail story went live, but they got an assist from Fox News and Fox Business Network, with the first claims on those networks coming during the "Fox & Friends" morning talk show.

"Here’s an example of how it’s going to affect your lifestyle," host Brian Kilmeade said April 23. "It’s going to cut 90% of red meat out of a diet. That’s four pounds a year."

"Part of his climate or green targets are to cut our red meat," host Ainsley Earhardt repeated minutes later. "He wants to cut out 90% of the red meat that you all eat."

Other Fox journalists followed suit, including Kudlow, Charles Payne and Jesse Watters. Watters said on "The Five" that to make Biden’s climate plan happen, "Americans would have to cut red meat consumption by a whopping 90%. That means only one burger a month." He repeated the same claim the following night on "Watters’ World."

In the primetime hour, Fox News host Sean Hannity said April 23 that Biden’s plans "will impact how you eat, including red meat." On April 24, Jeanine Pirro asked, "Do you like red meat? … Not so fast. The left with their Green New Deal wants to make sure you don’t."

The false claims were not limited to the talk show hosts, however. Fox News White House correspondent John Roberts opened his April 23 news segment on "America Reports," a daytime news program, by telling viewers, "Say goodbye to your burgers if you want to sign up for the climate agenda. That’s the finding of one study."

Later that night, anchor Shannon Bream asked her viewers, "Could new climate impact plans limit you to just one burger a month?"

Correspondent Kevin Corke told Bream that under Biden’s plan, "all Americans would have to limit their consumption of burgers by about one a month." 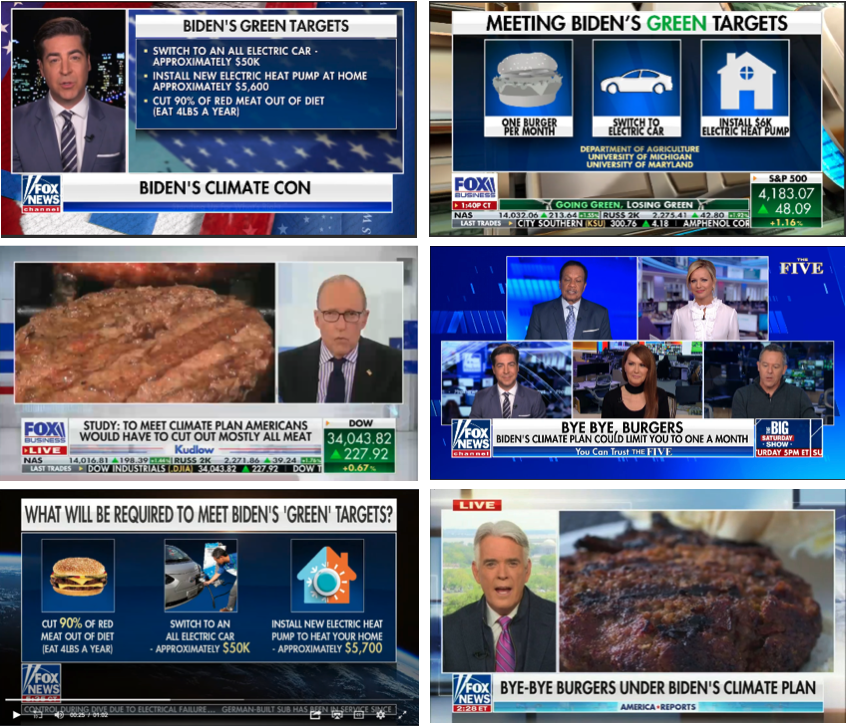 After fact-checkers and news outlets pointed out that the claims about Biden limiting meat were inaccurate, Roberts walked back the claims.

"That research from 2020 found that cutting back how much red meat people eat would have a drastic impact on harmful greenhouse gas emissions," Roberts said of the study. "The data was accurate, but a graphic and the script incorrectly implied that it was part of Biden’s plan for dealing with climate change. That is not the case."

But the false narrative about Biden banning burgers had already taken hold. On social media, Republicans used the claims to attack Biden. Rep. Marjorie Taylor Greene, R-Ga., branded him as the "Hamburglar," while Rep. Lauren Boebert, R-Colo., told him to "stay out of my kitchen."

"Joe Biden’s climate plan includes cutting 90% of red meat from our diets by 2030," Boebert said, falsely, in her tweet.

The since-corrected Fox News graphic was also shared widely, including in tweets by Donald Trump Jr. and Republican Gov. Greg Abbott of Texas. On Facebook, posts sharing it got tens of thousands of engagements and were flagged as part of the platform’s efforts to combat false news and misinformation on its News Feed. (Read more about our partnership with Facebook.)

In a graphic, Fox News claimed that "Biden's climate requirements" will "cut 90% of red meat from diet" to a "max 4 lbs per year" and "one burger per month."

The graphic echoed other chyrons and statements made by the network’s personalities the day after Biden pledged to cut U.S. greenhouse gas emissions in half by 2030. But the graphic is wrong, and Roberts issued a correction days later.

Biden’s climate plans do not include restrictions on red meat consumption, a White House official confirmed. Claims that they do trace back to a Daily Mail article that wrongly linked a 2020 study from the University of Michigan to Biden’s plans.

Daily Mail, "How Biden's climate plan could limit you to eat just one burger a MONTH, cost $3.5K a year per person in taxes, force you to spend $55K on an electric car and 'crush' American jobs," April 22, 2021

Email statement from Martin Heller, research specialist at the Center for Sustainable Systems at the University of Michigan, April 26, 2021