Wind turbines are seen by a rural road off of Interstate 20 on July 29, 2020, near Sweetwater, Texas. (AP/Gutierrez)

Fox News and other cable networks are spinning a false narrative that says frozen wind turbines, solar panels and even, somehow, the Green New Deal are to blame for Texas’ crippled energy system, according to a PunditFact review of closed caption information.

It’s true that about half of Texas’ wind power capacity was shut down early in the week as some turbine blades froze over thanks to a rare blast of Arctic air.

But state energy officials and energy experts said early on that the bigger problem was that the state’s deregulated natural gas infrastructure was ill-equipped for the severe cold.

The Green New Deal hasn’t passed in Texas or elsewhere, and it wouldn’t be binding if it did.

Those are the facts behind the historic crisis in Texas, where rolling blackouts have left Texans boiling snow for water as they wait out the power outages and subfreezing temperatures.

But that’s not the story Fox News personalities are telling. There, hosts have pinned the blame solely or mostly on the frozen wind turbines. They have told viewers that Texans are feeling the sting of green energy policies in a state run for decades by Republicans.

Some of the most widespread and erroneous claims came from Fox News host Tucker Carlson, whose primetime show is among the most-watched cable news programs.

"Unbeknownst to most people, the Green New Deal came to Texas, the power grid in the state became totally reliant on windmills," Carlson said Feb. 16. "Then it got cold, and the windmills broke, because that’s what happens in the Green New Deal."

To a lesser extent, the same terms cropped up repeatedly on Newsmax TV and One America News Network, two newer stations competing for the same audience.

Online, commentators like One America News correspondent Jack Posobiec seized on headlines about the frozen wind blades from local outlets such as the Austin American-Statesman. But they left out the context from the newspaper report, which said gusty winds spinning unfrozen turbines along the coast were offsetting some of the power losses.

Fox News, Newsmax and One America News did not respond to requests for comment. 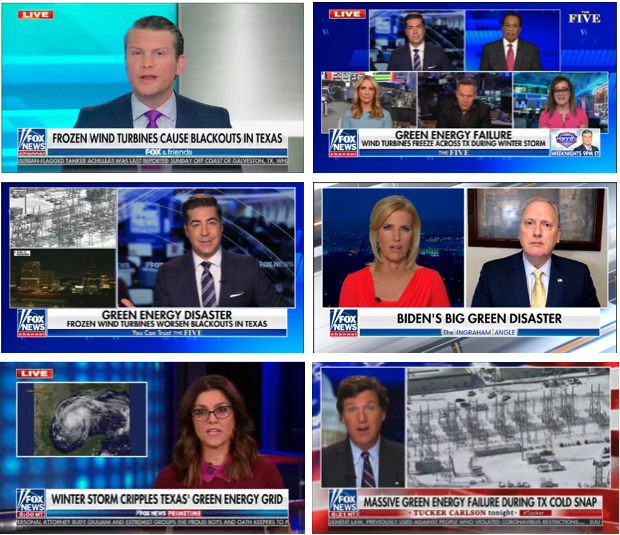 "The idea that wind is responsible for these outages is actually just absurd," Michael Webber, a mechanical engineering professor at the University of Texas, Austin, told PolitiFact. "It doesn’t match the facts on the ground, and it’s not what any energy expert would say."

"Wind has long been a magnet for ridiculous spin, but the political narratives this time don’t even hold up under their own weight," added Daniel Cohan, an associate professor in civil and environmental engineering at Rice University, who debunked such claims in an op-ed.

On Fox News, wind turbines were to blame

Carlson first blamed frozen windmills for the outages in Texas during a Feb. 15 segment.

"The windmills failed, like the silly fashion accessories they are, and people in Texas died," Carlson said, before adding that "green energy inevitably means blackouts."

The Fox News host’s comments were featured in Facebook posts shared thousands of times, according to CrowdTangle, a social media insights tool.

The next day, Carlson was back on the same message, warning again that "the same energy policies that have wrecked Texas this week are going nationwide."

He blamed the Green New Deal, a proposed House resolution that has not become law in Texas or anywhere else in the U.S., and he wrongly claimed that Texas’ power grid was "totally reliant on windmills," even as wind power only accounts for a fraction of the state’s energy. 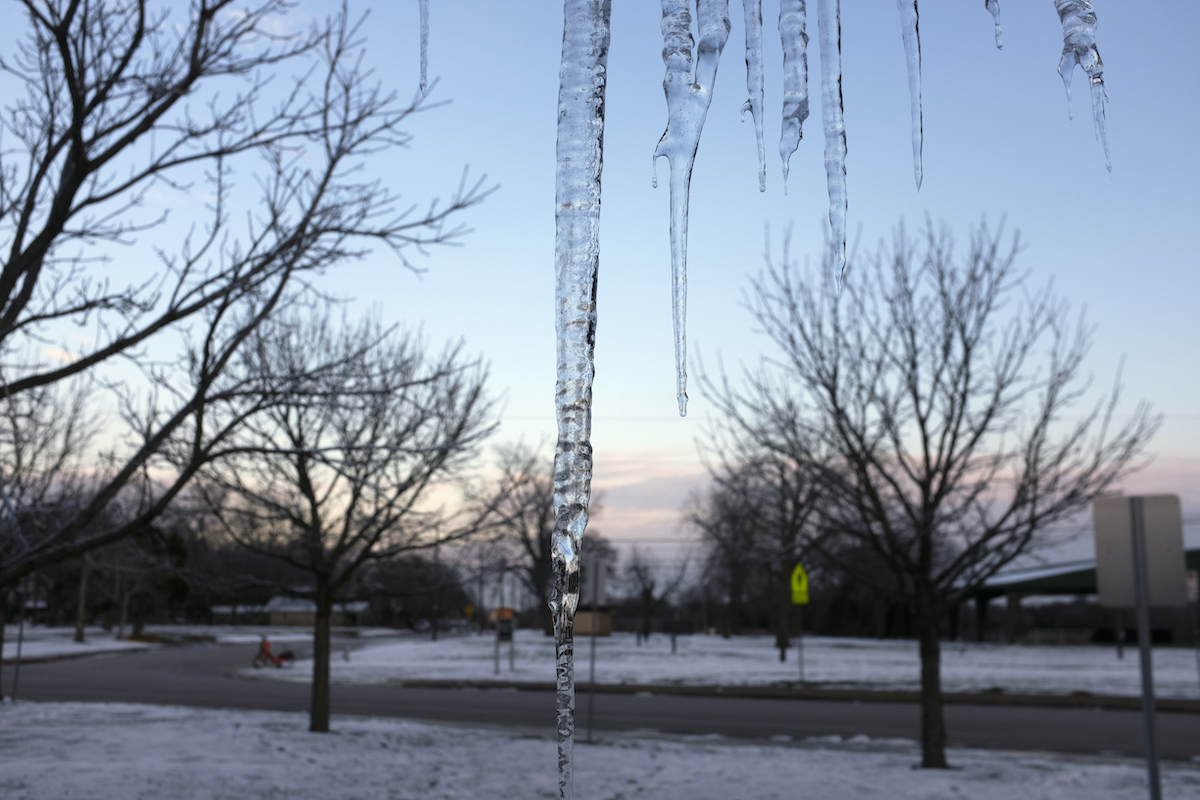 In reality, experts said the primary problem was that Texas’ thermal power plants, which make up a larger share of the state’s energy supply, were not built to withstand the cold. The plants began to go offline just as freezing temperatures boosted the demand for heating, prompting the Electric Reliability Council of Texas to impose rolling blackouts.

"To think that there’s anything wrong with renewables is entirely a red herring," said Sam Newell, an electricity expert at the Brattle Group, which has analyzed Texas’ power grid.

The truth didn’t seem to matter. Across Fox News and Fox Business, the chyrons were consistent:

Other Fox News and Fox Business Network personalities joined Carlson in invoking the Green New Deal and other renewable energy policies as a chilling lesson of what could go wrong.

"Many are now blaming, believe it or not, renewable green energy," Fox News host Sean Hannity said Feb. 16, bringing up the frozen wind turbines as he teed up an interview with Texas Gov. Greg Abbott, a Republican.

Abbott told Hannity the outages showed "how the Green New Deal would be a deadly deal." He said Texas was "thrust" into the situation because "our wind and our solar got shut down."

A similar conversation played out earlier in the day when Rick Perry, the former Texas governor and Energy Secretary under President Donald Trump, told correspondent John Roberts that the Green New Deal would cause "more events like we’ve had in Texas all across the country."

On "The Five," host Jesse Watters opened the show with Perry’s comments and his own warning: "Joe Biden and Democrats better think twice about unleashing the Green New Deal on the whole country. Just take a look at what's happening in Texas."

Larry Kudlow, debuting his new Fox Business show after leaving the Trump administration, called the outages "proof that green energy is not ready for primetime" and said that in sub-freezing temperatures, "wind and solar just don’t work for power."

When Carlson came back on air Feb. 17, he doubled down on his false windmills claim.

"Journalists, and the politicians they exist to protect, are lying to you," Carlson said. "They need you to believe that those windmills were a great investment."

Other networks competing for conservative viewers pushed the same misleading narrative at times on Feb. 15 and 16, albeit less frequently.

On Newsmax, host John DePetro told a panel to "ask the people in Texas how the Green New Deal is working out for them."

A guest on One America News, Junkscience.com founder Steve Milloy, said wrongly that "this has got nothing to do with the gas plants and coal plants that are also frozen."

The Texas Tribune, "Texas was "seconds and minutes" away from catastrophic monthslong blackouts, officials say," Feb. 18, 2021

Talking Points Memo, "What So Many Of The Misleading Narratives About Texas Miss," Feb. 18, 2021

The Texas Tribune, "Texas largely relies on natural gas for power. It wasn’t ready for the extreme cold," Feb. 16, 2021