Facebook posts
stated on December 6, 2021 in a Facebook post:
A campaign poster for New Zealand Prime Minister Jacinda Ardern with the slogan, “No jab. No job, no refunds.”

In July 2020, New Zealand Prime Minister launched a new slogan for her Labour Party in a race for re-election that she would go on to win by a landslide: "Let’s keep moving."

More than a year later, social media users started circulating an altered version of a political poster that had promoted the Labour Party’s slogan shortly after it was rolled out.

The fake poster spread on Facebook, Instagram and other social media platforms features a different slogan focused on the COVID-19 vaccines: "No jab. No job, no refunds."

"Remember to book your Christmas booster!" it reads, alongside a headshot of Ardern and a Labour Party logo. "Each booster gives you up to six months worth of freedoms."

In small font beneath the party’s logo, the fake poster adds a link to a website that doesn’t exist, plus a disclaimer warning, "Freedoms not available in all areas and are subject to change."

The Facebook and Instagram posts sharing the altered version of the poster were flagged as part of Facebook’s efforts to combat false news and misinformation on its News Feed. (Read more about our partnership with Facebook.)

New Zealand implemented strict lockdown policies and travel restrictions through much of the pandemic, which helped keep the nation’s COVID-19 cases and deaths extraordinarily low. The country mandated COVID-19 vaccines for a wide swath of its workers.

But the widely shared Labour Party poster that depicts Ardern promising "no job, no refunds" for people who don’t get the vaccine is not real. The image has been edited.

A reverse-image search pointed us to the unedited photograph of the original poster that said, "Let’s keep moving" — it is available on the photo sharing service Shutterstock. The caption on Shutterstock says the photo was taken Aug. 8, 2020, in Auckland. 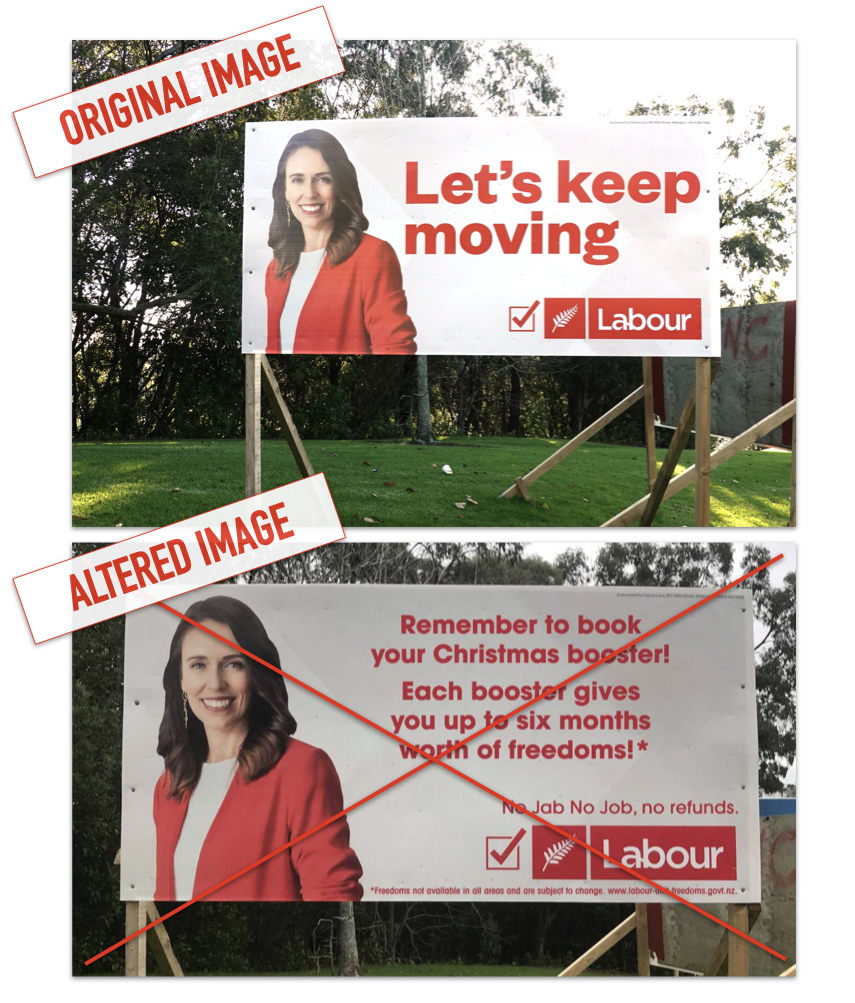 This PolitiFact illustration shows a campaign poster for New Zealand Prime Minister Jacinda Ardern as displayed in Auckland on Aug. 8, 2020, top, and an altered version of the same poster with the text changed, bottom. (Top image: Shutterstock; bottom image: Twitter)

The poster in the original photograph is clearer than the altered one circulating on social media, which includes blurry text and grammatical errors, in addition to the broken website link.

We rate those posts False.