Facebook posts
stated on February 7, 2021 in an image:
“Not one court has looked at the evidence and said that Biden legally won” the presidential election.

In a Feb. 7 post, one user wrote: "Not one court has looked at the evidence and said that Biden legally won."

"Not one," the post says. "Biden did not win legally."

The post was flagged as part of Facebook’s efforts to combat false news and misinformation on its News Feed. (Read more about our partnership with Facebook.) It has more than 6,000 shares.

Since Nov. 3, we’ve fact-checked scores of claims that falsely say widespread voter fraud swung the election in favor of Biden and that Donald Trump is the rightful president. This Facebook post is similarly wrong. 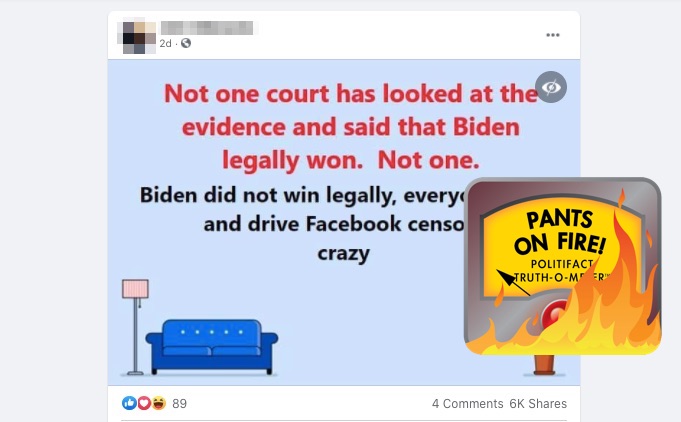 One key point: It’s not up to courts to determine whether a presidential candidate won an election. Judges can hear legal challenges to the way elections are administered or votes are counted, and their decisions may affect the outcome of an election, but they don’t declare the winner.

Under the Constitution, states have the power to administer elections and count votes. The states certified their results, some following audits and recounts, almost two months ago. On Jan. 7, Congress finalized those results, which showed that Biden won with 306 electoral votes, to Trump’s 232. Biden won the popular vote by about 7 million.

Biden was duly sworn into office Jan. 20. There is no evidence that voter fraud affected that outcome.

Election officials in every state said there was no sign of significant voter fraud during the voting process. The Cybersecurity and Infrastructure Security Agency called the 2020 election "the most secure in American history." Former Attorney General William Barr said the Justice Department had uncovered no evidence of widespread fraud.

Trump and his allies filed dozens of lawsuits in state and federal courts to challenge the election results. Not one of them proved that voter fraud affected the election outcome.

The Trump campaign won one lawsuit related to reducing the amount of time Pennsylvania voters had to fix errors on their mail-in ballots. The matter involved a small number of ballots that didn’t change the outcome.

In his dismissal of a case seeking to have Wisconsin’s Republican-led Legislature allocate the state’s electoral votes instead of going by the result of the popular vote, U.S. District Judge Brett H. Ludwig — a Trump appointee — said Trump’s claims failed "as a matter of law and fact."

"A sitting president who did not prevail in his bid for reelection has asked for federal court help in setting aside the popular vote based on disputed issues of election administration, issues he plainly could have raised before the vote occurred," he wrote. "This court has allowed plaintiff the chance to make his case and he has lost on the merits."

RELATED: A note to our readers who think President Trump won

PolitiFact, "Trump did not win two-thirds of election lawsuits ‘where merits considered,’" Feb. 9, 2021