Social media users on Facebook and Instagram are sharing a years-old image that wrongly claims 22 million people are not only living in the U.S. illegally, but voting in elections.

"I’ll tell you what a constitutional crisis is: 22 million illegal aliens living in America and using benefits they never contributed to and voting illegally," the text over the image says.

The image was flagged as part of Facebook’s efforts to combat false news and misinformation on its News Feed. (Read more about our partnership with Facebook.)

The image, which appeared on Facebook as early as April 2019, is circulating as supporters of former President Donald Trump continue to promote the false narrative that the 2020 election was stolen from him. But the claims in the image have always been inaccurate.

"There is no evidence that there are 22 million immigrants in the U.S. voting illegally, either in 2020 or at any time," said Lorraine Minnite, an associate professor of public policy at Rutgers University in Camden. "The claim is preposterous." 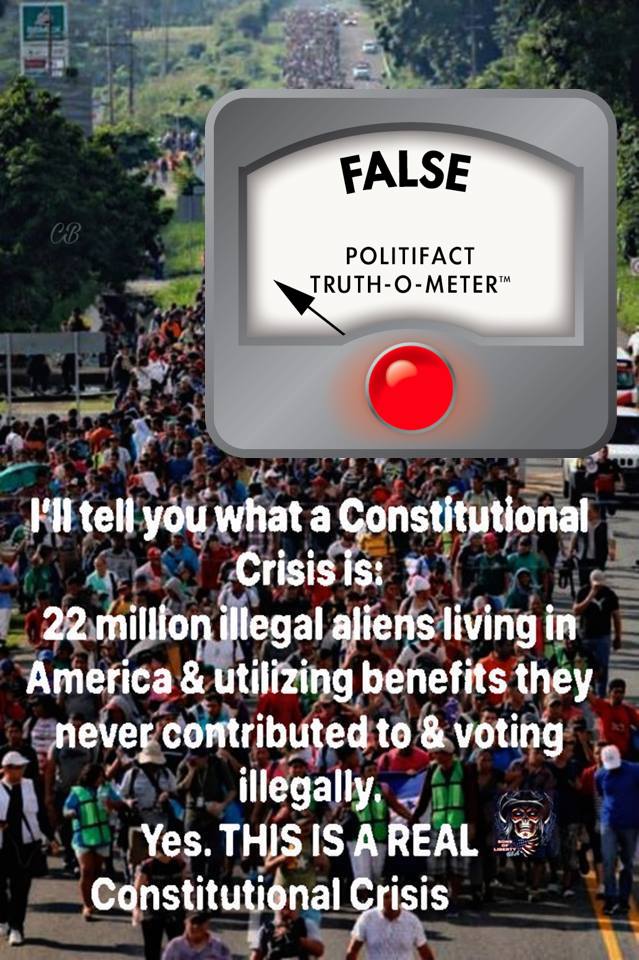 No evidence of widespread fraud

President Joe Biden won more votes than Trump in what local, state and federal officials affirmed was a free and fair election absent of the widespread fraud Trump claimed.

Judges across the country rejected dozens of lawsuits seeking to overturn the election, in many cases because the allegations of fraud came without the proof needed to back them up.

"One would think that such claims of historic subversion in our democracy would be backed up by the receipts to prove them," said Matthew Weil, director of the elections project at the Bipartisan Policy Center. "There is no evidence of widespread voter fraud at any level."

Blake Masters
stated on May 14, 2022 in a tweet
“Democrats want open borders so they can bring in and amnesty tens of millions of illegal aliens — that’s their electoral strategy.”

Federal law requires citizenship to vote in national elections, and would-be voters sign a form attesting under penalty of perjury that they are citizens when they register to do so. As PolitiFact has reported, states can check various databases to verify voters’ citizenship status.

"Election officials spend the weeks before and after Election Day constantly reconciling voter rolls and ballot totals to ensure that only eligible Americans cast ballots," Weil said. He added that cases of fraudulent voting are rare in any year and often the result of misunderstandings.

Minnite, who wrote a book about "The Myth of Voter Fraud," said the most common problem she has seen in her research on the issue is noncitizens getting accidentally registered to vote when they go to the DMV. But the number of people who fall into this category is "miniscule," she said.

In previous years, PolitiFact fact-checked several similar claims from Trump and others — all inaccurate — about immigrants voting illegally in the 2008, 2016 and 2018 elections.

Our reporting pointed to research from several organizations that found voter fraud among noncitizens is not widespread. Experts also told us at the time that fraud on the scale of millions would require months of coordination going undetected by elections officials.

For there to be "22 million" immigrants unlawfully in the U.S. and "voting illegally," as the latest viral image now claims, there would also need to be that many people in the country illegally.

And each and every one of them would have to be casting a ballot.

But the one study from 2018 that estimated the population here illegally was around 22.1 million has been criticized by demographers and immigration experts, who said it’s not grounded in empirical research about illegal immigration patterns and overestimates migration from Mexico, among other things, as PolitiFact reported. The Homeland Security Department, Pew Research Center, Center for Migration Studies of New York and Migration Policy Institute have all settled on much lower estimates.

"In each case, the organizations have individually developed estimates within a pretty tight range of about 10.5 million to 11.5 million unauthorized immigrants overall in the United States," said Michelle Mittelstadt, communications director for the Migration Policy Institute, a think tank.

Finally, immigrant adults living in the country illegally are ineligible for nearly all federal public benefits, with few exceptions, Mittelstadt said. That’s despite the fact that some pay many forms of taxes, including state and local sales taxes and property taxes.

A viral image says there are "22 million illegal aliens living in America and ... voting illegally."

That’s not true. Many reliable entities, including the Homeland Security Department and the Pew Research Center, estimate that there are closer to 11 million people living illegally in the U.S. There’s no evidence that 22 million are regularly voting illegally or did so in 2020.

PolitiFact, "Pence falsely says if HR 1 passes, millions of people in US illegally will be registered to vote," March 5, 2021

Email interview with Matthew Weil, director of the elections project at the Bipartisan Policy Center, July 27, 2021