Viral image
stated on May 18, 2021 in an Instagram post:
“The minions from ‘Despicable Me’ are based off of these Jewish children tortured by Nazis during the Holocaust.”

A black-and-white image of people wearing what look like helmets with a single eye hole is spreading on social media alongside a horrifying claim.

"The minions from ‘Despicable Me’ are based off of these Jewish children tortured by Nazis during the Holocaust," the post says. "Their high pitched voices in the movie are meant to represent the high pitched screams of the children during the cruel experiments."

If that seems absolutely unbelievable, it’s because it is. This is misinformation, and this post was flagged as part of Facebook’s efforts to combat false news and misinformation on its News Feed. (Read more about our partnership with Facebook.) 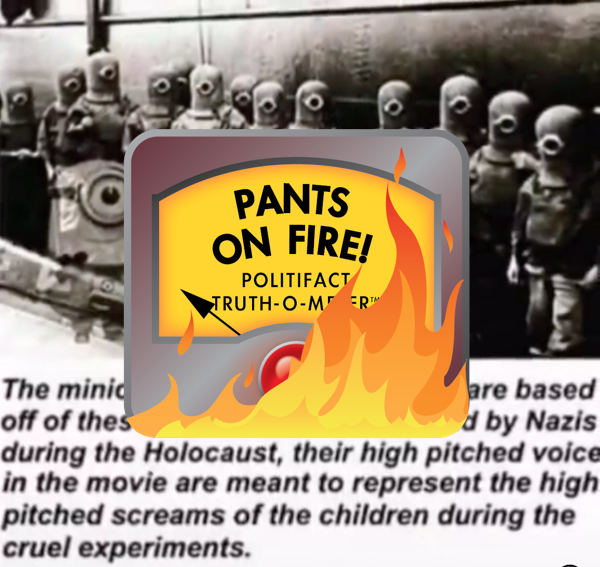 Rather, we found multiple fact-checks debunking this claim — which isn’t new and has circulated in several languages — as well as evidence that the photo was taken of submarine crew members decades before the Holocaust started.

Matthew Sheldon, executive director of museum operations at the National Museum of the Royal Navy, told PolitiFact that the picture in the Instagram post is part of the museum’s "extensive submarine archive" and shows the crew of the World War I-era submarine C7 wearing "Hall-Rees escape apparatus."

"This equipment was, in fact, an early attempt to save life," Sheldon said.

The C7 submarine was commissioned in May 1907 and broken up in 1920, according to the museum.

Ann Bevan, curator of the Diving Museum, which was established by the Historical Diving Society, also told PolitiFact that the photo shows a "crew of a submarine wearing the Hall-Rees submarine escape equipment" in 1908.

A website for this museum features a diving helmet that looks like the ones on the Facebook post. According to the museum, the shallow-water diving helmet was featured in two silent movies, "20,000 Leagues Under the Sea" in 1916 and "Wet Gold" in 1921 and "looks remarkably similar to some little yellow animated characters known as Minions."

In 2018, Vanity Fair published sketches of the Minions design. Their creators originally imagined them as short human factory workers, who then evolved into robots with a single eye that was "meant to convey a dimming of wits."

"Eventually, the filmmakers settled on a kind of robot-human synthesis (or, if not human, at least something more or less organic), melding the innocence of the former with the ‘relatability’ of the latter," Vanity Fair said.

In their final form, some of the Minions have one eye, others have two, and they all wear goggles.

And among the movies that "Minions," a "Despicable Me" prequel, draws inspiration from is a film that satirically alludes to Adolf Hitler.

In one scene of "Minions," a Minion named Bob is made king of Britain and gives an unintelligible speech before a crowd. The scene mirrors one in the political satire "The Great Dictator," during which comedic actor Charlie Chaplin portrays a Hitler-like leader and speaks in gibberish before a large crowd, the New York Times reported.

UPDATE, May 21, 2021: The story has been updated to include comment from Matthew Sheldon, executive director of museum operations at the National Museum of the Royal Navy. The rating is unchanged.

The Telegraph, The Nazis invented the Minions, and other wild movie conspiracy theories, Oct. 26, 2017

"The Submarine Pioneers: The Beginnings of Underwater Warfare," Richard Compton-Hall, 1999

Email interview with Ann Bevan, curator, The Diving Museum, May 20, 2021

Email interview with the National Museum of the Royal Navy curatorial team, May 21, 2021

Statement from Matthew Sheldon, executive director of museum operations at the National Museum of the Royal Navy, May 21, 2021

Viral image
stated on June 14, 2021 a Facebook post:
The FBI building in Washington is “completely closed. No one’s in there.”

Viral image
stated on June 6, 2021 an Instagram post:
“Donald Trump gave his big speech today with his pants on backward.”

Viral image
stated on May 18, 2021 a Facebook post:
Says James Mattis said, “If you burn the American flag you’ll spend two years in the military. I promise you, you’ll be cured of the desire to burn a flag ever again.”