House Speaker Nancy Pelosi, D-Calif., mingles before the COVID-19 Hate Crimes Act, in the East Room of the White House, on May 20, 2021, in Washington. (AP/Vucci)

Social media accounts popular with conservatives are claiming that a clip of lawmakers at a recent White House event shows "Dems caught not wearing masks."

"It’s not about your health," says the text on the video, which was shared widely on Instagram, including by One America News Network, a pro-Trump outlet. "It’s about control."

Instagram posts sharing the video were flagged as part of Facebook’s efforts to combat false news and misinformation on its News Feed. (Read more about our partnership with Facebook.)

The video, made from a 12-second clip posted by the Recount, shows Sen. Raphael Warnock, D-Ga., House Speaker Nancy Pelosi, D-Calif., Attorney General Merrick Garland and other politicians mingling in the White House. The group gathered as President Joe Biden signed into law a bill meant to address the rise in hate crimes against Asian Americans during the pandemic. 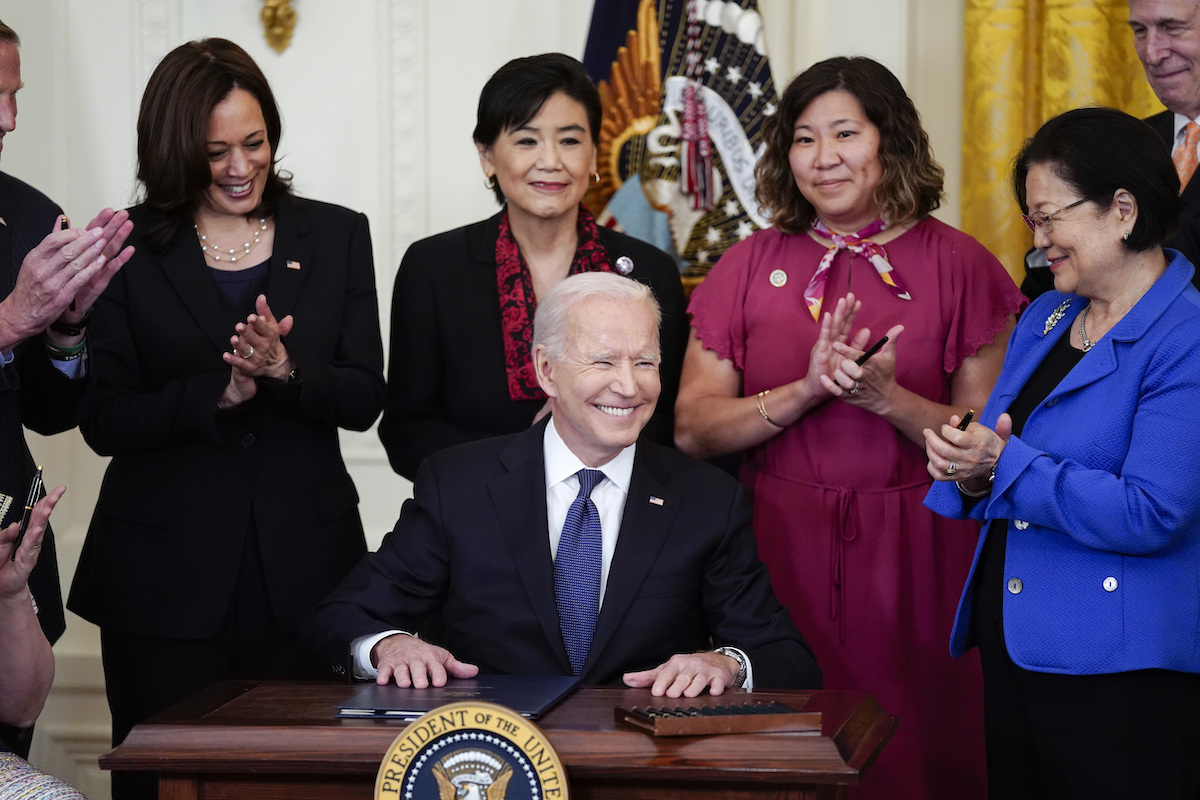 President Joe Biden smiles after signing the COVID-19 Hate Crimes Act in the East Room of the White House on May 20, 2021, in Washington. (AP)

The video is missing critical context: The Democrats present were acting in accordance with the Centers for Disease Control and Prevention’s recently updated guidance for fully vaccinated Americans, which as of May 13 said vaccinated people could gather indoors without masks and without physically distancing. The people in the video were not "caught" violating any mask mandate.

"Fully vaccinated people no longer need to wear a mask or physically distance in any setting, except where required by federal, state, local, tribal, or territorial laws, rules, and regulations, including local business and workplace guidance," the agency said.

The White House emailed staff the day the guidance was updated to say that those who were fully vaccinated would no longer be required to wear masks, according to reports. CNN reported soon after that 100% of Democratic lawmakers in the House and Senate had been vaccinated.

The crowd at Biden’s event also included Sen. Susan Collins, R-Maine, who co-wrote the legislation, and whom Biden thanked in his remarks.

"The nicest part is being able to shake hands again and to see people's smiles," Collins said.

The Wall Street Journal reported that the event was open to 68 seated guests, plus a few dozen staff and journalists. Fact-checkers at Lead Stories and the Dispatch also determined that the video saying Democrats at the event were "caught not wearing masks" was missing context.

The Instagram posts are partially accurate — the Democrats were together without masks — but the videos also leave out important details and take things out of context. The Democrats were acting in line with the CDC’s guidelines and White House policies for fully vaccinated individuals.

Lead Stories, "Fact Check: Democrats Were Not 'Caught' Not Wearing Masks -- CDC Guidelines Allowed It," May 21, 2021