As the jurors in Kyle Rittenhouse’s closely watched trial deliberated over a verdict, social media users circulated a compilation of old, out-of-context photos that they claimed showed piles and pallets of bricks placed near the courthouse in Kenosha, Wis.

Similar rumors featuring some of the same photos appeared online following the murder of George Floyd in May 2020, as social media users alleged that left-wing groups had strategically stashed stacks of bricks in cities like Dallas, San Francisco, Kansas City, Denver and Detroit in preparation for violent protests.

"Bricks in Kenosha? Again?" said the headline on one Nov. 17 blog post on Substack, which spread widely on Facebook and featured the misleading compilation of brick photos.

"A Kenosha officer checked a local alleyway and verified there are ‘bricks everywhere,’" said another Facebook post shared the same day.

Rittenhouse, 18, faced five criminal charges related to his fatal shooting of two unarmed men and shooting of a third, armed man, during an August 2020 protest in Kenosha. He was found not guilty on all charges on the jury’s fourth day of deliberations.

But the viral image compilation shared across Facebook, Twitter and other platforms showed only photos and video screen grabs from cities other than Kenosha. The photos and videos were not snapped during the Rittenhouse trial, but were instead taken in 2020, as racial justice protests flared across the nation following Floyd’s murder. And they showed brick piles that were linked to nearby construction, rather than planned violence.

"The report of bricks being dropped off in our community is fake news," said Sgt. David Wright, public information officer for the Kenosha County Sheriff’s Department, in an email to PolitiFact on Nov. 19. "We have not found anything of the sort here in Kenosha."

The Kenosha Police Department did not respond to a phone call, but the department tweeted that it "is aware of numerous attempts by malicious actors to spread disinformation on various social media platforms. To date, there is no credible threat to public safety."

From left to right and top to bottom, here's what the images in the compilation really show: 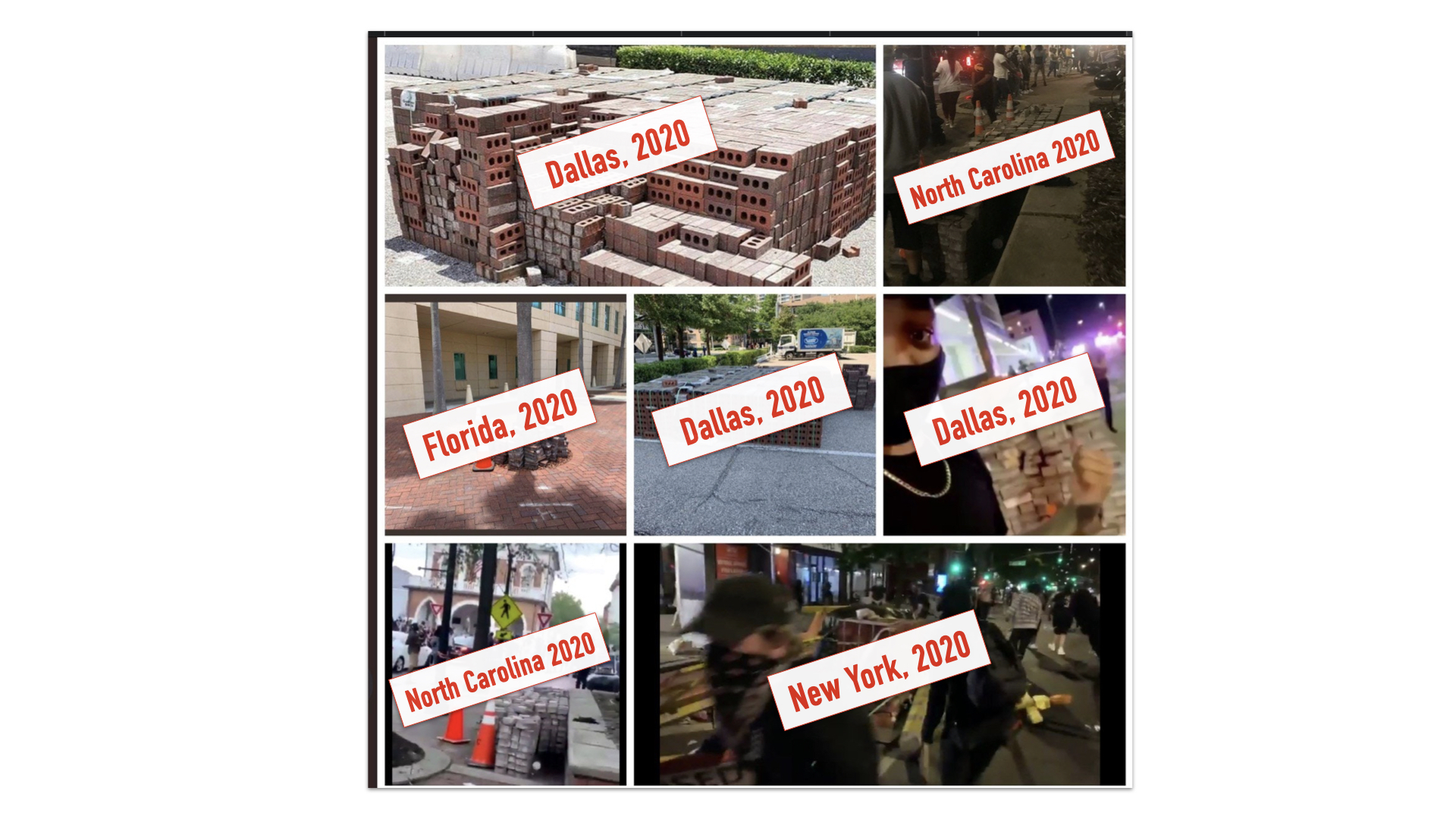 This illustration shows the image compilation circulating on social media, marked with the photos' proper context.

The "bricks everywhere" quote cited in some social media posts comes from an alleged recording of a Nov. 16 police communication about a specific location in Kenosha, according to the Associated Press,Newsweek and other outlets. The quote was featured in the viral Substack blog post, and also in a story from the Gateway Pundit, a conservative website.

But the audio is unrelated to the photos shown in the image compilation spread widely online.

The photos and video screen grabs shown in the compilation are all more than a year old, and none were taken in Kenosha, let alone near the courthouse where Rittenhouse was tried.

The Starfire Codes on Substack, "Bricks in Kenosha? Again? Pay No Attention to the Brick Wizard Behind the Curtain....," Nov. 17, 2021

Lead Stories, "Fact Check: Pile of Bricks In Kenosha Is NOT Found Suspicious By Police And Photos Are From 970 Miles Away," Nov. 18, 2021

BuzzFeed News, "People Say Pallets Of Bricks Are Showing Up Near Protests All Over The US. The Truth Is More Complicated," June 5, 2021

Snopes, "Were Pallets of Bricks Strategically Placed at US Protest Sites?" June 4, 2021