Bloggers
stated on May 31, 2020 in a Law Enforcement Today article:
“Piles of bricks are being staged in cities around the country, indicating riots are planned.”

Some of the latest theories about the nationwide Black Lives Matter protests have been built with bricks.

After the death of George Floyd, a black man who died in Minneapolis police custody after a white officer kneeled on his neck, demonstrations erupted in more than 350 cities across the country. As some turned violent, protesters started hurling bricks at buildings and police officers.

Some say that tactic was planned.

Dozens of social media posts published over the past few days show images and videos of brick piles in several American cities. A May 31 article from Law Enforcement Today, a website that has published misleading information in the past, says the mysterious footage suggests left-wing activists planned for violence at Black Lives Matter demonstrations.

"There are many who were thinking that these riots have antifa written all over them and that appears to be getting confirmed that these riots were planned, orchestrated events," the website wrote.

The article was flagged as part of Facebook’s efforts to combat false news and misinformation on its News Feed. (Read more about our partnership with Facebook.) It has been shared more than 27,000 times in conservative and law enforcement Facebook groups.

The story mainly pulls from a May 31 Breitbart article, which strings together photos and videos of bricks from protests around the country. But Law Enforcement Today goes a step further, saying the footage suggests that "riots were planned, orchestrated events."

Is there evidence to support that claim? The short answer: Not really. The longer answer: It depends on the city.

Kyle Reyes, the national spokesman for Law Enforcement Today, said the story was based on two anonymous sources within the Dallas Police Department. Those officers sent the website footage of brick pallets in Dallas.

"They told us that protesters didn’t put them there, but someone did and they don’t belong there," Reyes said.

However, Reyes said Law Enforcement Today was unable to verify photos and videos of bricks in other American cities.

In Kansas City, Mo., police spokesman Capt. David Jackson said there was reason to believe that protesters were stashing bricks "for nefarious use."

"We have located some bricks that have been left in a couple of areas," he told reporters May 31. "We’re going to do our best to get those picked up and moved so they’re not used. I don’t know who would have put them there — I don’t think they’re doing any type of construction or anything like that."

However, in a story about Jackson’s comments, the Daily Caller wrote that "so far, only the Kansas City Police Department has linked the discovery of pallets of bricks to pre-planned rioting." That jibes with what other police departments told PolitiFact.

For example, in San Francisco — one of the cities mentioned in Law Enforcement Today’s article — police don’t believe that Black Lives Matter protesters are creating piles of bricks to throw at people.

"We have no information to support that," Michael Andraychak, a public information officer for the San Francisco Police Department, said in an email. "Bricks for a construction project were delivered in one San Francisco neighborhood. The contractor was contacted and the bricks were moved."

Frisco, Texas, north of Dallas, is another city where social media users have posted photos of brick piles. One Facebook post in a conspiratorial group called "Expose the Truth" claims a pallet of bricks showed up "on the path of the protest."

"You wanna tell me this is not planned and organized now?" reads the post, which is a screenshot of a tweet. 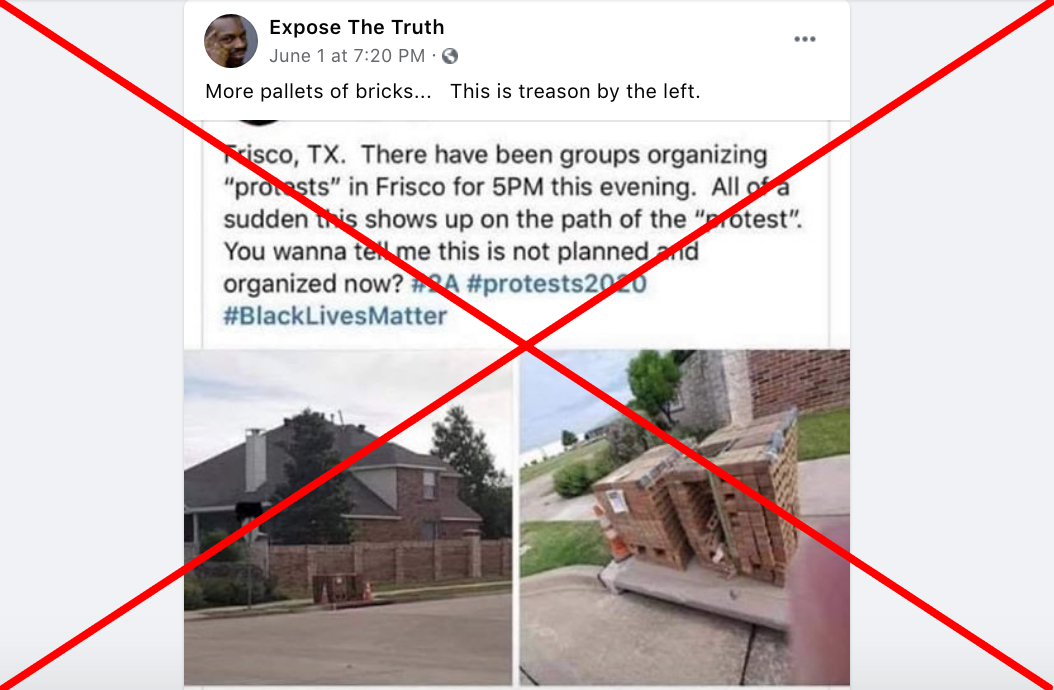 Police in Frisco say that’s not what happened.

"The pallets of bricks, while they were near the area, it wasn’t along the route or anything like that," said James Willis, a public information officer for the Frisco Police Department. "Those pallets had been there for over a week."

The bricks belong to the homeowner’s association of a neighborhood in town, which was planning to use them to repair a retaining wall, Willis said. Once the police told the neighborhood that people were concerned that protesters could use the bricks, the HOA moved them.

A YouTube video published by rapper King Tussin on June 1 purports to show police officers in Boston unloading bricks from a pickup truck "in riot zones." We reached out to the Boston Police Department for more context.

We haven’t heard back, but a June 2 statement from the Northeastern University Police Department in Boston said officers were cleaning up a "damaged brick sidewalk."

On Monday, June 1, while on a routine patrol of campus, two of our officers came across a damaged brick sidewalk at the corner of Tremont and Coventry streets that posed a safety hazard for pedestrians due to loose, upturned and broken bricks.

We also reached out to the police departments in Dallas and Fayetteville, N.C., both of which are mentioned in the Law Enforcement Today article. We haven’t heard back.

Photos and videos of bricks have also been used to spin other baseless theories on social media.

Some Facebook posts have used photos of bricks to make unproven claims about the connection between violence at Black Lives Matter protests and antifa, a broad coalition of anti-fascist, left-wing groups. Others alleged the bricks prove that the violence has been pre-planned. And some asserted that billionaire philanthropist George Soros is behind the supply of bricks.

There is no evidence to support any of those claims.

A Law Enforcement Today article claims that "piles of bricks are being staged in cities around the country, indicating riots are planned."

While police in Kansas City have said they suspect bricks are being stashed for nefarious purposes, there is no evidence that such a tactic is being widely used. Officials in several other cities have said there is no connection between footage of bricks and Black Lives Matter protests.

The article contains an element of truth but ignores critical facts that would give a different impression. We rate it Mostly False.

Breitbart, "Watch: Piles of Bricks Showing Up in Downtown Dallas During Protest," May 31, 2020

The Daily Caller, "Kansas City Police Say Bricks Staged Near Protests Were ‘To Be Used During A Riot,’" June 1, 2020

Law Enforcement Today, "Report: piles of bricks are being staged in cities around the country, indicating riots are planned," May 31, 2020