Tweets
stated on October 10, 2021 in a tweet:
“Countless Southwest Airlines employees have walked out of their jobs to oppose the vaccine mandate, causing operations to effectively shut down.”

A Southwest Airlines jetliner takes off from a runway at Denver International Airport on Sept. 14, 2021, in Denver. (AP)

In separate statements to the press, Southwest Airlines and the union representing its pilots denied the widespread internet rumors that claimed the airline canceled thousands of flights because crew members walked off the job or called in sick to protest the company’s COVID-19 vaccine mandate.

Southwest canceled more than 1,000 flights scheduled for Sunday, Oct. 10, according to FlightAware, a flight-tracking service, even as competing airlines called off relatively few flights. Between the evening of Friday, Oct. 8, and the morning of Monday, Oct. 11, the Dallas-based airline dropped more than 2,000 flights nationwide, the Dallas Morning News reported.

The airline said that air traffic control issues and weather challenges in Florida disrupted flights on Oct. 8, setting off a cascade of cancellations and delays nationwide that compounded as the airline scrambled to recover from crews, aircrafts and customers that were displaced.

But the cancellations occurred shortly after the Southwest Airlines Pilots Association petitioned a court to temporarily block the company’s COVID-19 vaccine mandate, prompting speculation among some social media users that the flights were dropped not because of bad weather or other issues, but because Southwest pilots staged a walkout or sickout in a protest against the mandate. The unsubstantiated posts were flagged as part of Facebook’s efforts to combat false news and misinformation on its News Feed. (Read more about our partnership with Facebook.)

An Oct. 10 tweet claiming Southwest Airlines cancellations were due to pilot walkouts in protest of a COVID-19 vaccine mandate.

"Countless Southwest Airlines employees have walked out of their jobs to oppose the vaccine mandate, causing operations to effectively shut down," said one Oct. 10 tweet.

"Southwest is canceling flights and blaming the weather because their employees are saying NO to the authoritarian vaccine mandate," said another post on Instagram.

"Pilots are using their sick time before they are terminated on Nov. 24 due to the (vaccine) mandate," said a post on Facebook.

The posts received hundreds of thousands of engagements across Facebook and Instagram, according to CrowdTangle, a social media insights tool. They were buoyed by conservative influencers such as Sen. Ted Cruz, R-Texas, who tweeted that the cancellations were President Joe Biden’s "vaccine mandate at work." (The CNBC report Cruz shared with his tweet included a statement from a Southwest spokesperson calling that rumor "inaccurate" and "unfounded.")

But the posts were refuted by several key groups, including the Southwest Airlines Pilots Association. The union said in an Oct. 9 statement, "We can say with confidence that our pilots are not participating in any official or unofficial job actions." In a second statement Oct. 10, the union’s president, Casey Murray, addressed the rumors more directly:

"There are false claims of job actions by Southwest pilots currently gaining traction on social media and making their way into mainstream news. I can say with certainty that there are no work slowdowns or sickouts either related to the recent mandatory vaccine mandate or otherwise. Under the (Railway Labor Act), our Union is forbidden from taking job action to resolve labor disputes under these circumstances. SWAPA has not authorized, and will not condone, any job action.

"SWA has claimed that the immediate causes of this weekend’s meltdown were staffing at Jacksonville Center and weather in the southeast U.S., but what was a minor temporary event for other carriers devastated Southwest Airlines because our operation has become brittle and subject to massive failures under the slightest pressure."

The union said Oct. 5 that it is not against vaccines, but it decided to take legal action against Southwest’s requirement because the airline made the decision without negotiating.

Murray told the Dallas Morning News that the data showed that pilot sick rates during the heavy cancellation days were "exactly in line with where they were all summer with the same kind of operational disasters."

"The weekend challenges were not a result of employee demonstrations, as some have reported," Southwest Airlines added in an Oct. 11 statement to PolitiFact.

The airline said its operations were returning to normal. It pinned the weekend cancellations on the weather and air traffic control issues in Florida the evening of Oct. 8, saying the combination "created significant flight disruptions throughout our network and we spent the weekend working to recover from the high number of displaced crews, aircraft, and customers."

Similarly, the Federal Aviation Administration tweeted that there have been no air traffic staffing shortages reported since Oct. 8 — contradicting related social media rumors, which claimed air traffic controllers had also staged walkouts or sickouts to protest the vaccine mandates. An FAA spokesperson told PolitiFact that any staffing issues would be seen on the agency’s website.’

The FAA’s tweet said the problems the evening of Oct. 8 were "due to widespread severe weather, military training, & limited staffing in one area of the Jacksonville en route center."

The chief operating officer of the Jacksonville Aviation Authority also refuted the rumor about a walkout led by air traffic controllers in an internal email, which was obtained by a local reporter. The COO said the Jacksonville staff was limited Oct. 8 because of a combination of controllers who were on normal, approved leave, or at home because they had just been vaccinated.

On Twitter, Southwest initially attributed the dropped flights to "(air traffic control) issues and disruptive weather," although other airlines did not have to cancel nearly as many flights. In an Oct. 10 memo to Southwest employees, Alan Kasher, Southwest’s executive vice president of daily operations, described a domino effect triggered by the problems from that evening. 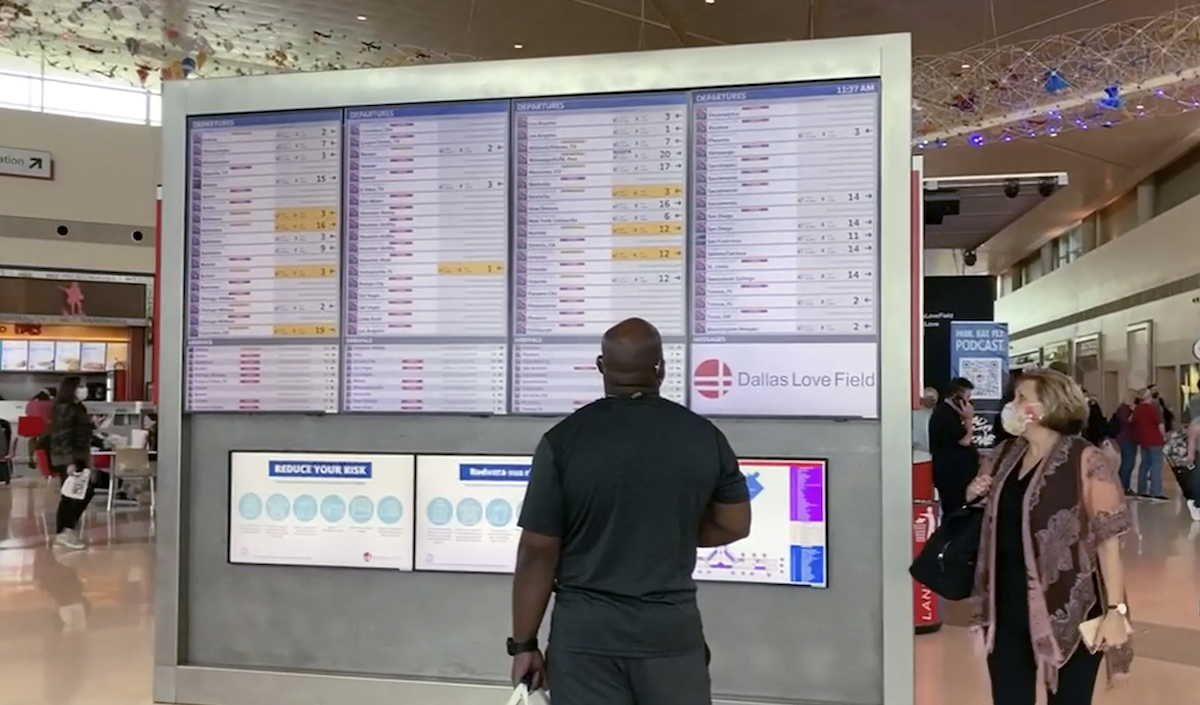 In this frame grab from cellphone video, passengers look for information on their flights on Oct. 10, 2021, at Dallas Love Field. (AP)

There are fewer flight options than usual to reroute crews and passengers who encounter problems, Kasher said.

Southwest had been slated to run its highest number of scheduled flights on Oct. 10 since the start of the coronavirus pandemic, the Dallas Morning News reported. After the disruptions on Oct. 8, the airline cancelled more than 800 flights on Oct. 9, and then over 1,000 on Oct. 10.

Similar issues plagued airlines over the summer. Social media users claimed that widespread cancellations from Spirit Airlines and American Airlines in August were the result of walkouts from crew members protesting the vaccine mandates. PolitiFact rated those claims False.

A tweet said, "Countless Southwest Airlines employees have walked out of their jobs to oppose the vaccine mandate, causing operations to effectively shut down."

The claim — along with other variations circulating online — is unsubstantiated. Southwest and the Southwest Airlines Pilots Association denied that Southwest pilots led any such walkout or sickout to protest the vaccine mandate. They attributed the flight cancellations to other factors, including bad weather and other issues on Friday that prompted a wave of cancellations.

Without evidence, we rate this claim False.