As supply chain issues mount, some Facebook users are sharing an image that purports to show a turkey for sale at Target for an eye-popping price: $123,199, and $9,999.99 per pound.

Some Facebook users who reacted to the post blamed President Joe Biden for the crazy cost the viral image showed, leaving comments such as "inflation is killing us" and "thanks Joe." 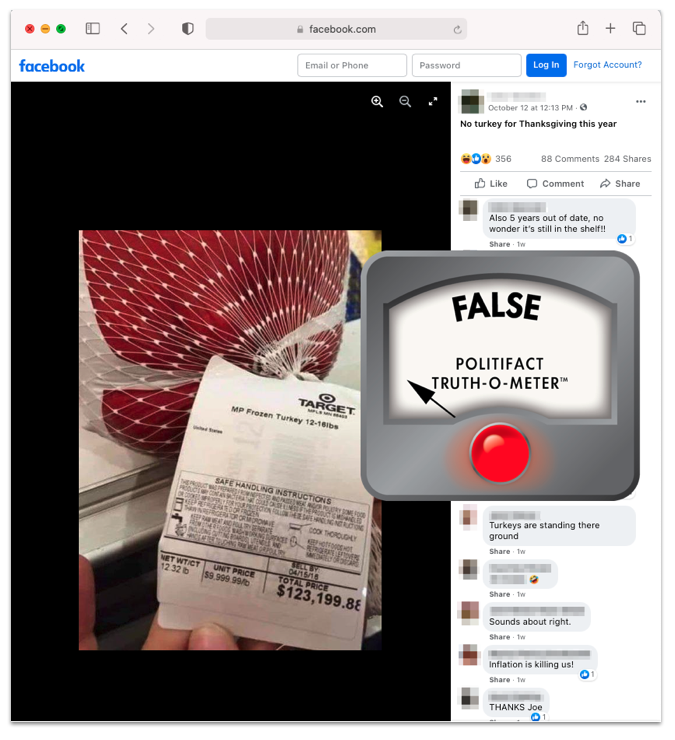 Elon Musk
stated on May 2, 2022 in a tweet
NBC News “covered up Hunter Biden laptop story.”

But while supply chain backlogs could affect the cost and availability of Thanksgiving turkeys, the photo of a $123,000 bird at Target is several years old — and it’s nowhere near reflective of the true cost of a frozen turkey at the retail and grocery giant, which is many times lower.

PolitiFact found the same photo posted in November 2015 on Reddit and the image sharing service Imgur. The price tag in the photo also includes an expiration date of April 15, 2016.

The price tag lists a Target store at the Nicollet Mall in Minneapolis as the location of the photo, and PolitiFact confirmed that the pricing was an error at a single store in 2015. The Reddit user who appears to have first uploaded the image in November of that year wrote on the forum that he brought the turkey to a cashier, but "the ticket didn’t have a barcode to scan."

The $123,000 price is exponentially higher than the cost of a frozen turkey at Target — or at other U.S. grocery stores, according to recent data from the U.S. Department of Agriculture.

Target’s website currently shows that similarly sized frozen turkeys are going for a max price of about $23 at the same location in Minneapolis, and $1.39 per pound.