Anglican Archbishop Emeritus Desmond Tutu gestures after receiving a shot of the COVID-19 vaccine at the Brooklyn Chest Hospital in Cape Town, South Africa, on May 17, 2021. (AP)

A hoax Twitter account created under the name of an Anglican archbishop from Johannesburg falsely claimed that anti-apartheid leader Archbishop Desmond Tutu died at the age of 90.

"ATTENTION. The Anglican Diocese of Johannesburg receives now the sad news of the death of our dearest Archbishop Desmond Tutu," the fake account, which purported to belong to the Archbishop Stephen Moreo of Johannesburg, tweeted Oct. 20.

The rumor spread quickly online, fueled by a flurry of blog sites that shared it and a number of verified Twitter users who reported it as truth.

But in reality, Tutu is still alive. The word of his passing was completely fabricated.

The claim that he died originated on a fake Twitter account that was made by an Italian man known for creating hoax accounts. The account was set up in August and had posted only a few tweets before Oct. 20. After the rumor took off, the account was deleted. 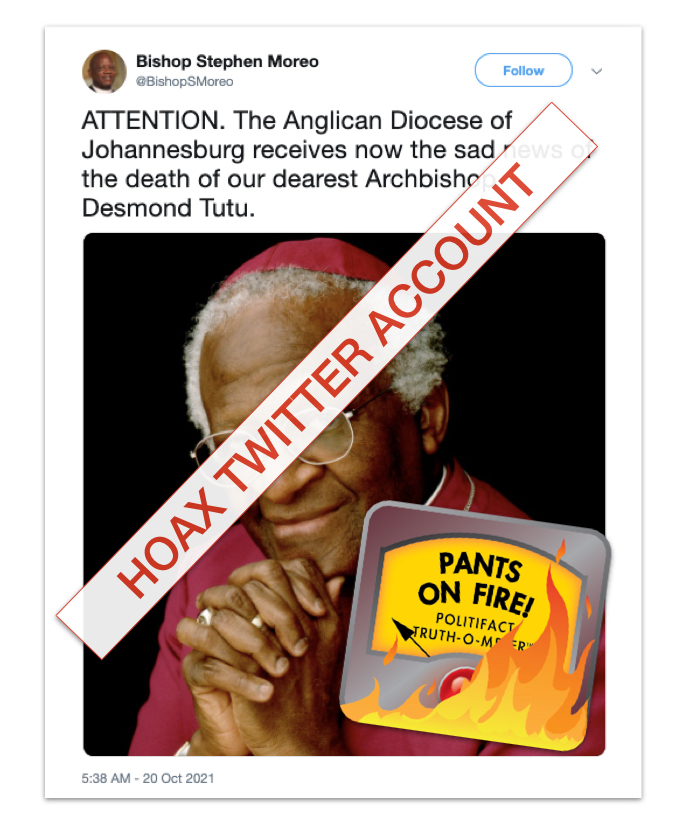 In a statement on its website, the Desmond and Leah Tutu Legacy Foundation said the account claiming to be Moreo’s was "fake" and denounced the viral rumor that the account started.

In a statement of his own, Moreo also decried the social media reports that quoted him as having said that Tutu had died, calling them "false and malicious."

Some social media users and journalists captured screenshots of another tweet from the fake Twitter account after it started the Tutu rumor. The tweet, posted before the page was deleted, said, "This account is a hoax created by Italian journalist Tommaso Debenedetti."

Debenedetti has created several fake accounts over the years, sparking similar false rumors about the deaths of other famous people, such as the writer Cormac McCarthy. The Washington Post reported in 2017 that he typically tweets the same line owning up to the hoaxes he creates after they go viral online. He told the Guardian about his methods in 2012.

Reached for comment, Debenedetti confirmed in an email to PolitiFact that he created the fake account in Moreo’s name and posted the hoax about Tutu’s death. "I did that to show how (it) is easy to spread fake news using social media," Debenedetti said.

Debenedetti said the fake Moreo account was the same account, with the name and handle changed, that he used to impersonate Tanzanian author Abdulrazak Gurnah and falsely claim that Nigerian author Wole Soyinka had died. When we asked Debenedetti to verify that, he sent us a personalized tweet from what he said was a new handle on the same account.

A similar internet hoax falsely claimed that Tutu died in 2018. PolitiFact rated that Pants on Fire.

The Desmond and Leah Tutu Legacy Foundation said the rumor was false, and that Tutu was alive. The Johannesburg archbishop impersonated by the hoax Twitter account said the same.

The rumor originated on a fake Twitter account, since-deleted, that was set up by a man known for creating hoax accounts to start false death rumors.

The Guardian, "Twitter hoaxer comes clean and says: I did it to expose weak media," March 30, 2012