Russian Ministry of Defense
stated on April 3, 2022 in a Telegram post:
A video taken from a car driving through Bucha, Ukraine, shows a corpse “moving his arm,” and then “in the rear view mirror the ‘corpse’ sits down.”

Ukrainian officials accused Russia of a massacre in a city outside of Kyiv, claiming they found hundreds of dead people after Russian forces withdrew from the area.

The Russian Ministry of Defense denied responsibility as it has with previous attacks, saying in a post on Telegram that the photographs and videos coming out of Bucha, Ukraine, "are another hoax, a staged production and provocation by the Kiev regime for the Western media."

Across Telegram, Twitter and other platforms, Russian officials pushing that claim shared a video showing footage taken from a car as it steered through a street strewn with bodies.

A Telegram post shared by the Russian Ministry of Defense, and reshared by the Ministry of Foreign Affairs, falsely claimed that a video from Ukraine’s Expreso TV showed abnormalities that proved the people were "deliberately laid out to create a more dramatic picture." (The videos contain sensitive and graphic content.)

"The video of the bodies is confusing," the Russian defense ministry wrote in the post, which included a slowed-down version of the video. "Here at the 12th second the ‘corpse’ on the right is moving his arm. At 30th second in the rear view mirror the ‘corpse’ sits down."

Other Russian agencies and officials shared the allegations against Ukraine across Twitter. 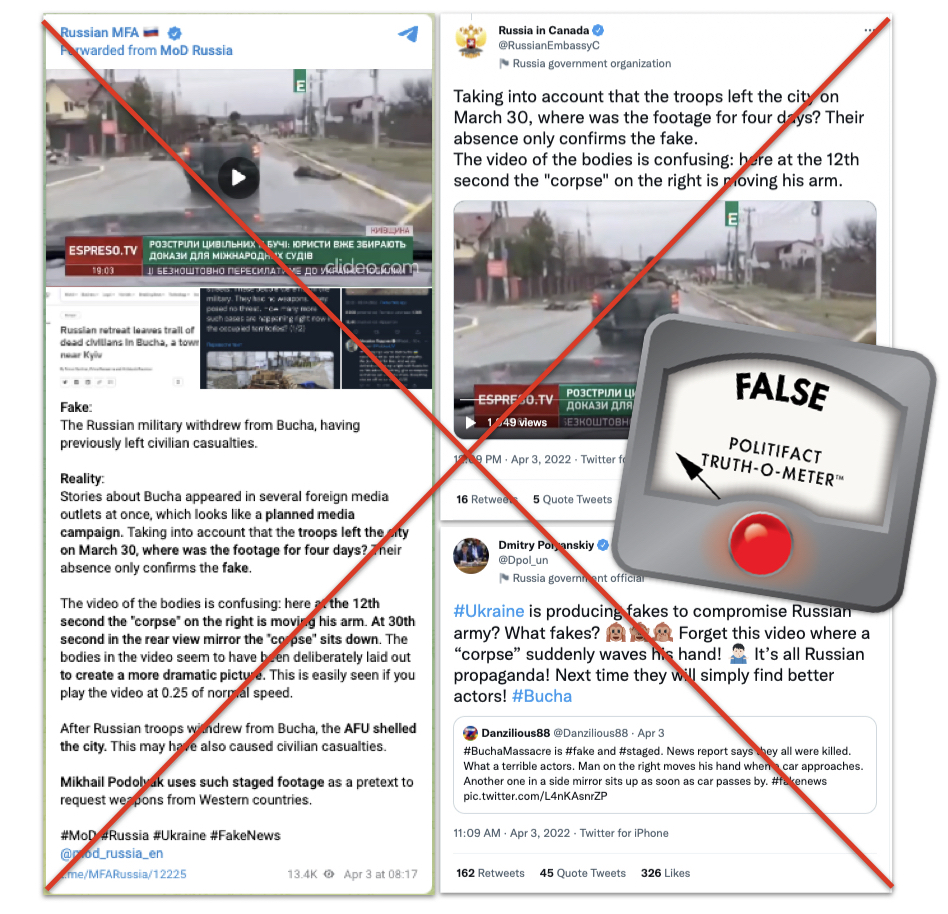 But the claims are false.

The video from Expreso TV, available on the station’s YouTube channel, does not show one of the people moving an arm. Instead, journalists and social media debunkers revealed that it shows a mark — perhaps a droplet of water or a speck of dirt — moving across the car’s windshield.

One Twitter account inverted the coloring of the video to show more clearly that the person on the ground lies still as the speck moves across the windshield. BBC News posted a version of the video that is edited to show the mark circled in red, along with other similar marks.

The Expreso TV video does not show a corpse sitting up in the car’s passenger-side mirror, either. As BBC News’ disinformation reporter Shayan Sardarizadeh tweeted, the dead body appears as though it is sitting in the mirror because the mirror's shape has a distorting effect. The buildings in the background also appear distorted.

PolitiFact asked an expert in physics and optical sciences about the video. He said the same thing: that the alleged movement is due to the mirror’s effects.

"I've looked at the videos in the links you sent and can see no evidence whatsoever that the corpse either moved its arm or sat up," said Charles M. Falco, professor emeritus at the University of Arizona’s James C. Wyant College of Optical Sciences, in an email.

"What I do see is the effect on the reflected image of the stationary corpse caused by the distortion of the moving convex mirror," Falco continued. "That distortion is due to the fact the mirror is convex to give it a wider field of view than a flat mirror has, and is why those rear view mirrors have the warning printed on them that ‘objects in mirror are closer than they appear.’"

Sardarizadeh identified the same victims from the Expreso TV clip in photographs from Getty Images and a different video. Benjamin Strick, the director of investigations at the Center for Information Resilience and a contributor at Bellingcat, found YouTube videos posted by the Guardian and Al Jazeera that show additional angles.

A New York Times review of satellite imagery contradicted the Russians’ claim that many of the civilians seen dead in Bucha were killed after the Russian forces left the area. The corpse Russian officials claimed was moving his arm was visible in the satellite imagery.

The Russian Ministry of Defense said a video taken from a car driving through Bucha, Ukraine, shows a corpse "moving his arm," and then "in the rear view mirror the ‘corpse’ sits down."

Both claims misrepresent what the video in question shows.

The video shows a mark floating across the car’s windshield — perhaps a drop of water or a speck of dirt — which Russia officials falsely portrayed as of a corpse "moving his arm."

Similarly, what Russian officials falsely claimed was a corpse sitting up was actually a dead person whose body appeared distorted due to the shape of the car’s passenger-side mirror.