These are photos of college accounting students participating in an on-campus simulation to learn about the work of IRS criminal investigation special agents.

You may have seen the online images showing people wearing protective vests and wielding fake handguns.

"These are actual photos of an IRS agent training class," read one Facebook post of four such photos. Another post showed a video clip of some of the same people in the photos, describing it as a "new video and photos of agents training." These kinds of claims were further fueled by U.S. Rep. Thomas Massie, R-Ky., who tweeted the images and said: "These are not auditions for the next Police Academy sequel. This is an actual IRS recruiting program." 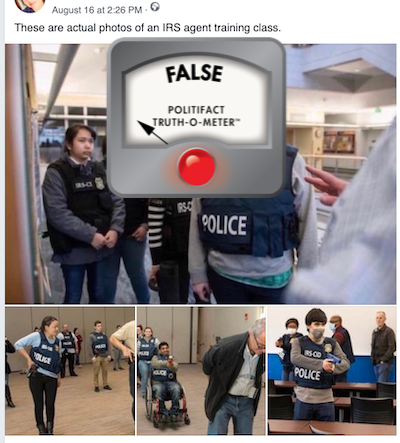 (Screenshot from Facebook)
These posts are being shared online amid misinformation about IRS plans to increase its staffing and enforcement. And they were flagged as part of Facebook’s efforts to combat false news and misinformation on its News Feed. (Read more about our partnership with Facebook.)

"Accountants don’t typically carry guns," a 2017 press release from Stockton University says about what it called a "hands-on lesson in IRS criminal investigations." "But, as 24 accounting students at Stockton University learned, being a special agent for IRS Criminal Investigations means you might uncover a money laundering operation for terrorists, resulting in an armed raid."

The students reviewed bank statements, invoices and tax returns. They surveilled and interrogated witnesses. They requested arrest and search warrants.

The simulation was part of what’s called the "Adrian Project," an IRS program that visits college and university campuses "to provide students with a firsthand look at what it’s like for IRS special agents to carry out an investigation, tracking illicit money from the crime to the criminal," according to the agency.

Stockton professors have said they brought the program there to expose students to different types of careers in accounting.
IRS Criminal Investigation is a division of the IRS, and its agents have been armed for more than a century. These federal employees also aren’t the typical auditors that Americans facing routine audits will encounter. The notorious gangster Al Capone, for example, was investigated by the division, then called the Intelligence Unit, and later convicted on tax evasion charges. More recently, criminal investigation agents have been part of a task force tracking down the assets of Russian oligarchs.

We rate claims that these photos show an IRS agent training class False.

Facebook posts
stated on September 27, 2022 a Facebook post:
As Hurricane Ian approached, President Joe Biden said, “a vital part of preparing for hurricane season is to get vaccinated now.”

Viral image
stated on September 28, 2022 an Instagram post:
A news anchor warned that if Hurricane Ian “moves 20 miles to the west … you and everyone you know are dead.”