The elaborate scheme Watters described is a massive distortion of a Feb. 11 court filing that has attracted attention from conservative media in the week after it dropped.

The filing came from special counsel John Durham, selected by former Trump Attorney General William Barr to examine the reasons for the Justice Department’s investigation into Russian interference in the 2016 election. Special counsel Robert Mueller led the initial investigation that culminated in a report published in 2019.

"If there was ever any doubt that Clinton was behind the Russia hoax, that’s officially gone," Watters said on his primetime show Feb. 14. "Durham’s documents show that Hillary Clinton hired people who hacked into Trump’s home and office computers before and during his presidency, and planted evidence that he colluded with Russia. Yeah. You heard that right."

"Hillary broke into a presidential candidate's computer server and a sitting president's computer server, spying on them," he went on. "There, her hackers planted evidence, fabricated evidence connecting Trump to Russia, then fed that doctored material to the feds and the media."

None of what Watters said on that program about an effort to hack and frame Trump with fake evidence is borne out by Durham’s filing, which he cited. The document never even mentioned hacking.

Still, the narrative echoed elsewhere on Fox News, where talk of hacking and an offense "worse than Watergate" stretched across programs, according to TVEyes, a media monitoring service.

One of the first headlines posted to Fox News’s website inaccurately declared that the Clinton campaign paid to "infiltrate" Trump’s servers. The word "infiltrate" was never used in Durham’s filing. Rather, the Fox News article was using words from a former Trump administration official who commented for the story.

On air, Sean Hannity claimed Clinton’s team "hacked into the office of the president." Tucker Carlson said emails or text messages were "intercepted." Maria Bartiromo insisted that "Democrat-paid operatives illegally hacked" Trump’s communications before and after he became president. 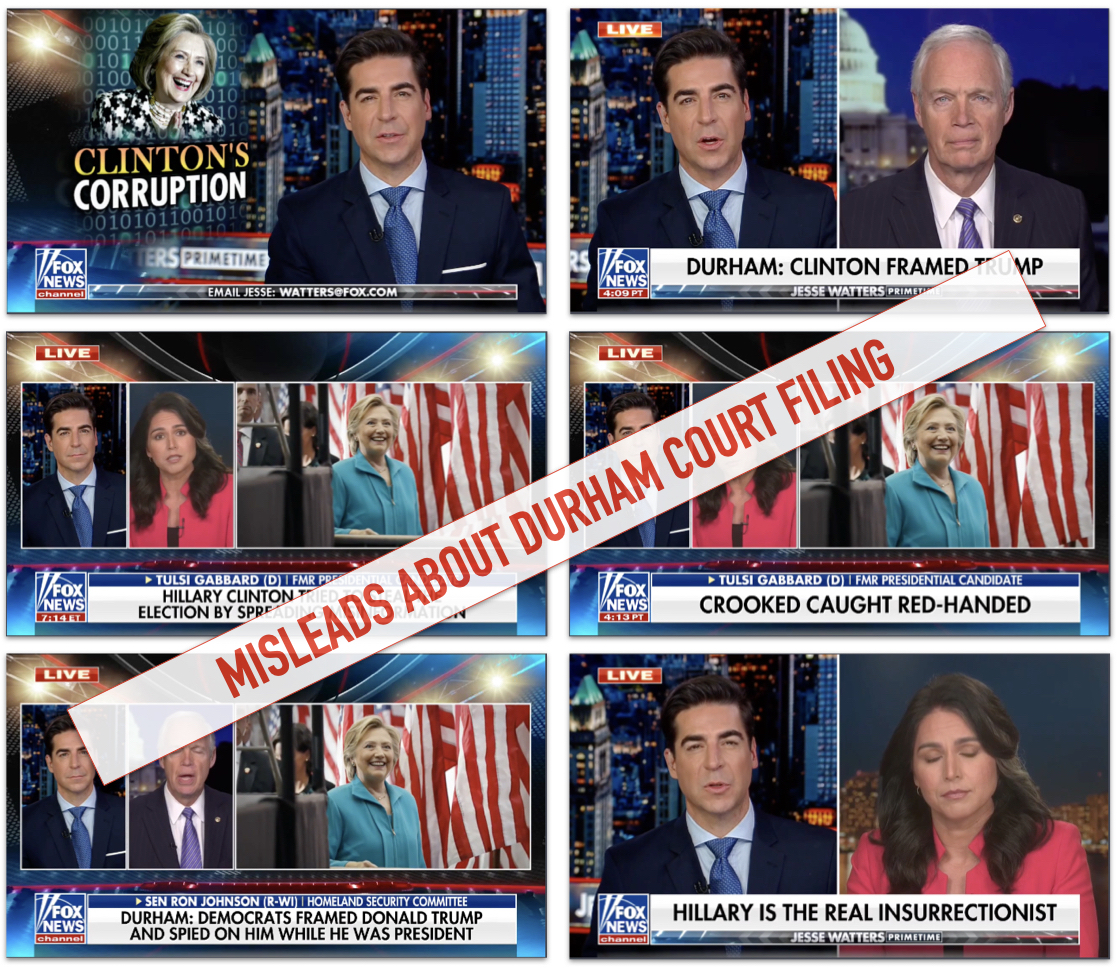 A video Watters posted of his segment ricocheted across Facebook, where it received hundreds of thousands of views and was flagged as part of the platform’s efforts to combat false news and misinformation on its News Feed. (Read more about our partnership with Facebook.)

Back in October 2020, Barr tapped Durham, a Justice Department attorney, to lead an investigation into the origins of the Russia investigation that led to the Mueller report. 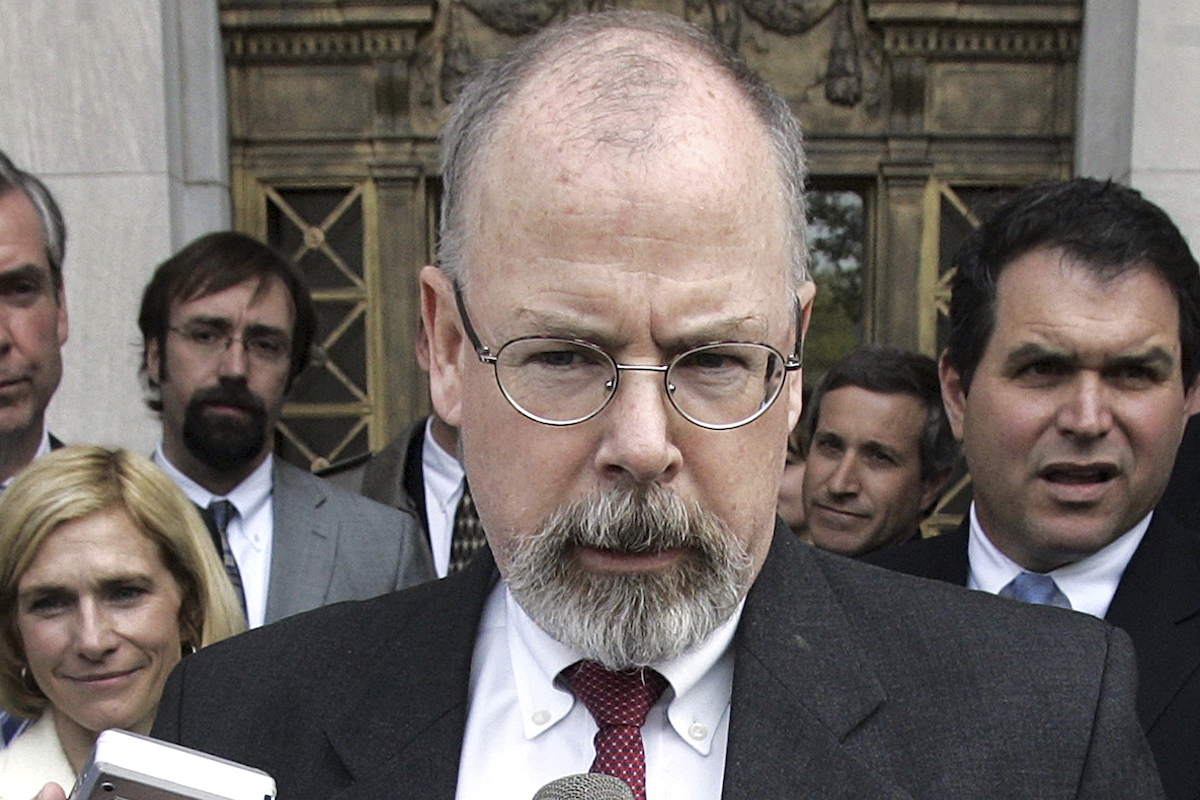 In the 16 months since then, Durham has filed two indictments. Both are on charges of making false statements to the FBI.

The filing that created the latest stir was a motion in Durham’s case against Michael Sussmann.

Sussmann worked as an attorney at Perkins Coie, a law firm that did work for Clinton’s 2016 presidential campaign. In 2015, he was separately retained by another client, a technology executive, according to the September 2021 indictment against him. Reporters later revealed the executive to be Rodney Joffe, an internet entrepreneur and cybersecurity expert.

According to Sussmann’s indictment, he met with the FBI in 2016 and passed along data that cybersecurity researchers working with Joffe had flagged as potential evidence of a secret backdoor communications channel between the Trump Organization and a Kremlin-linked bank.

"Sussmann stated falsely that he was not doing his work on the aforementioned allegations ‘for any client,’ which led the FBI General Counsel to understand that Sussmann was acting as a good citizen merely passing along information, not as a paid advocate or political operative," the indictment said. The indictment said he was actually there on behalf of the Clinton campaign and Joffe.

Sussmann has pleaded not guilty and denied wrongdoing. Joffe has not been charged with any criminal activity in the matter — nor has Clinton.

Durham’s latest filing in the case against Sussmann was a 13-page motion related to a conflict-of-interest matter. And though it had some new details, it was mostly information that was listed in Sussmann’s indictment or previously reported.

But supporters of Trump latched onto the filing’s description of another meeting Sussmann had with the CIA in 2017. During that meeting, the filing said, Sussmann relayed suspicions over information Joffe and researchers had gathered while sifting through internet traffic data that showed domain name lookups. The information was said to have shown Russian-made phones used from networks serving Trump Tower and the White House, among other locations.

The data the researchers were parsing through was domain name system, or DNS, data. That data shows the IP addresses a computer is visiting. It is typically non-public or proprietary, but it’s regularly studied and monitored by private contractors and government agencies for the purpose of filtering out suspicious traffic, malware and dangerous websites.

That information would not reveal the contents of a person’s screen or messages, only that one computer was trying to communicate with another, said Julian Sanchez, a senior fellow at the libertarian Cato Institute, in a Twitter thread.

Joffe’s company at the time had legal access to the data because it was providing services for the White House, the filing said. A spokesperson for Joffe told NBC News that according to the contract, the "data could be accessed to identify and analyze any security breaches or threats," and that the findings Sussmann shared reflected concerns about anomalies in the data.

Durham’s filing said that Joffe and his team "exploited this arrangement by mining the (executive office of the president’s) DNS traffic and other data for the purpose of gathering derogatory information about Donald Trump." 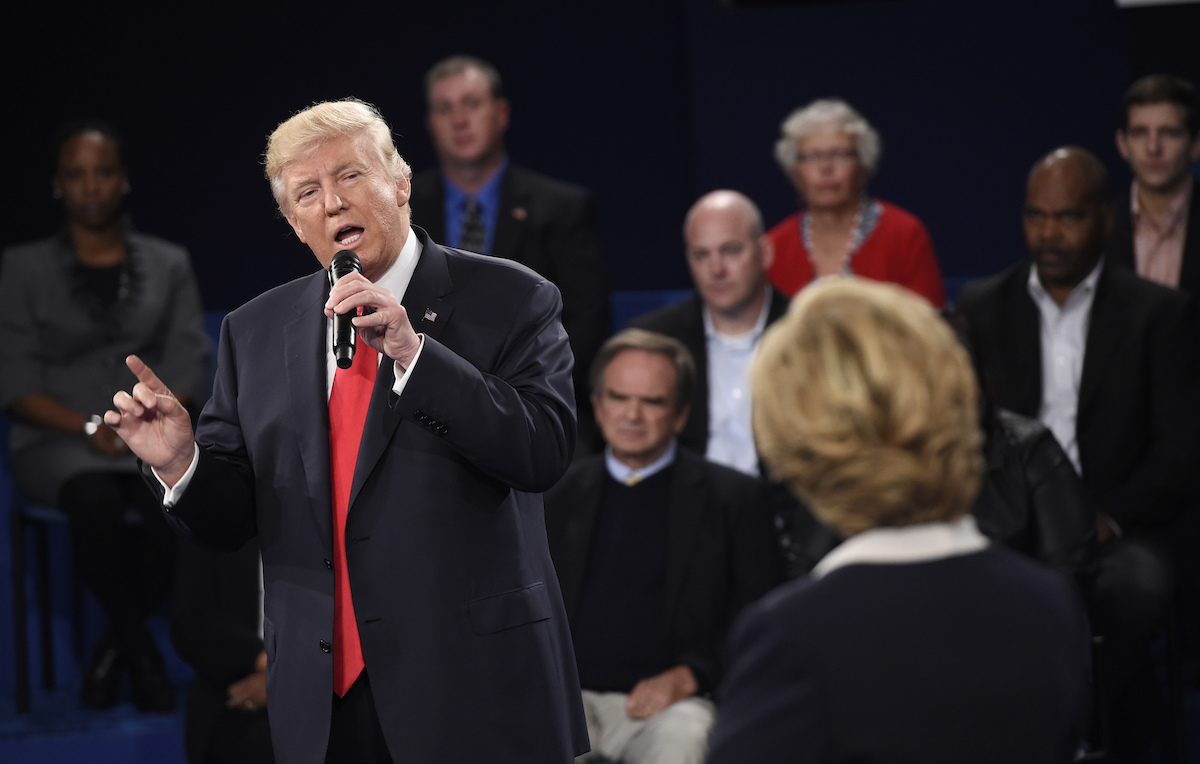 Then-candidate Donald Trump speaks during a presidential debate with Hillary Clinton at Washington University in St. Louis on Oct. 9, 2016. (AP)

"The allegations are that the defendant gained access to internet traffic information from a third party, and that he used this information as evidence to support a false claim that Trump and/or his associates were using a certain type of phone," said Ric Simmons, a law professor at the Ohio State University and an expert on computer crime, who reviewed the filing for PolitiFact.

The allegations have not yet been proven in trial.

Why Watters is wrong

Watters cast Durham’s allegations into something more sinister: a plot, supposedly hatched and paid for by Clinton and carried out throughout Trump’s presidency, that involved hacking his computers and planting falsified evidence linking him to Russia.

Fox News did not respond to a request for comment asking where in his filing Durham accused Clinton or her campaign of all that Watters said he did.

Durham’s filing never claimed that Clinton paid Joffe. And it never accused anyone of "hacking," a term that Simmons said generally refers to the act of breaking into a computer system without authorization, a federal crime. 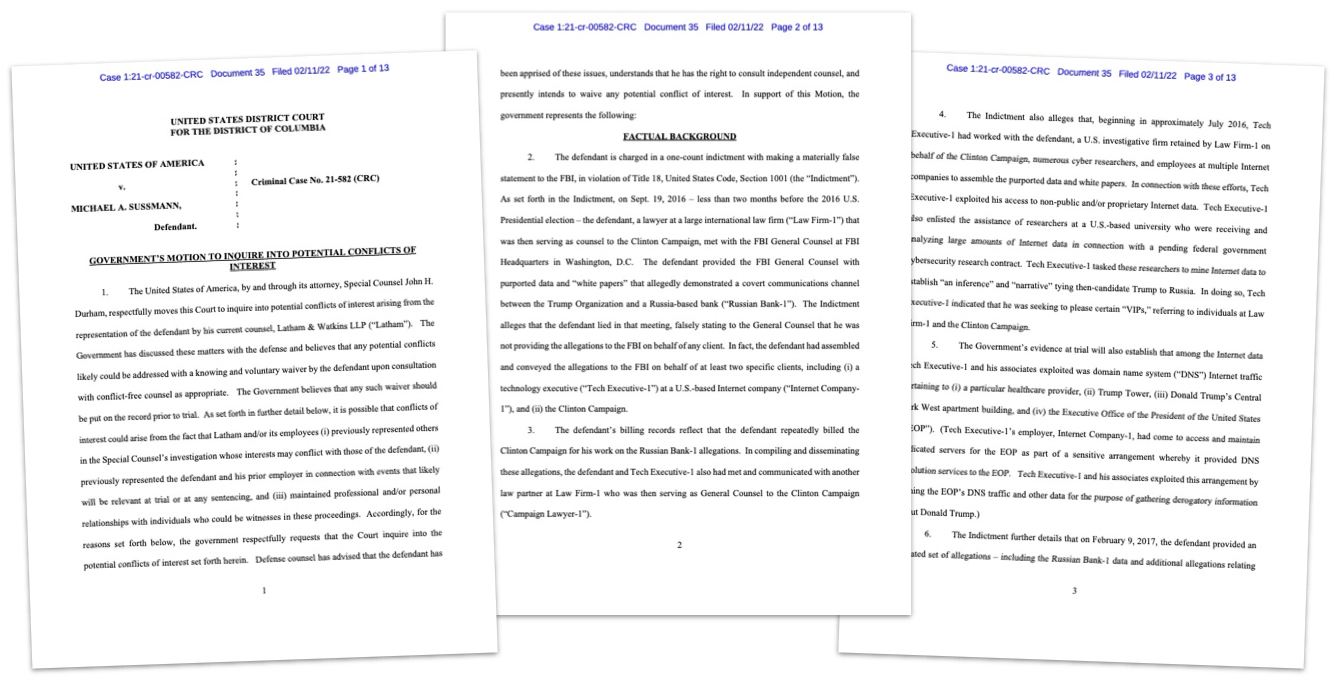 "Neither Joffe nor the (researchers he worked with) were being paid by the Clinton campaign," Sanchez tweeted. "Nobody ‘hacked’ or ‘intercepted’ anything. They were analyzing data they had lawful access to, in order to look for suspicious patterns that might suggest foreign cyberattacks."

"This is not the same as alleging he broke into a system," Simmons said.

Durham’s motion also said nothing about Watters’ claim that Clinton-backed hackers placed falsified evidence on Trump’s servers to frame him for collusion with Russia. "I have no idea where this statement comes from," Simmons said. "The allegations in the document never mention planting evidence on a server or altering the information on the server in any way."

Then there’s the issue of timing. Durham’s filing never said that the DNS data in question was captured while Trump was president, as Watters and other conservative media members have claimed. The indictment Durham lodged against Sussmann said that the data Sussmann shared with the CIA in 2017 ranged "from 2016 through early 2017."

Attorneys for one of the researchers who worked with Joffe told the New York Times that the claims about spying on Trump during his presidency are wrong: "The cybersecurity researchers were investigating malware in the White House, not spying on the Trump campaign, and to our knowledge all of the data they used was non-private DNS data from before Trump took office."

In a response to Durham’s motion, Sussmann’s lawyers said the same. The data Sussmann shared with the CIA "pertained only to the period of time before Mr. Trump took office, when Barack Obama was president," they wrote. The lawyers also said "the Clinton campaign had effectively ceased to exist" by the time of the meeting and was not billed for it.

"​​The coverage from right-wing media is a technically illiterate conspiracy corkboard covered in yarn, and the mainstream coverage thus far has mostly been about pointing out why that’s silly and wrong," Sanchez said of the Durham filing in his Twitter thread.

On Watters’ claim about it, he wrote: "Every part of that is a preposterous lie."

Watters said, "Durham’s documents show that Hillary Clinton hired people who hacked into Trump’s home and office computers before and during his presidency, and planted evidence that he colluded with Russia ... fabricated evidence connecting Trump to Russia."

None of that is backed up by Durham’s filing, a motion over a conflict-of-interest matter in the case against an attorney linked to the Clinton campaign who was charged for lying to the FBI.

Insider, "What you need to know about the John Durham filing that Trumpworld is fuming over," Feb. 15, 2022

Cybersect by Robert Graham on Substack, "Did rogue techies spy on the president?" Feb. 15, 2022

The New York Times, "Court Filing Started a Furor in Right-Wing Outlets, but Their Narrative Is Off Track," Feb. 14, 2022

U.S. District Court for the District of Columbia, "Government’s Motion to Inquire into Potential Conflicts of Interest" in United States of America v. Michael A. Sussmann, Feb. 11, 2022

U.S. District Court for the District of Columbia, "Indictment" in United States of America v. Michael A. Sussmann, Sept. 16, 2021