Facebook posts
stated on January 1, 2022 in a Facebook post:
Says Betty White said Dec. 28, days before she died, “Eat healthy and get all your vaccines. I just got boosted today.”

Betty White, the Emmy-winning star of "The Golden Girls" and "The Mary Tyler Moore Show" whose career and celebrity extended into old age, died Dec. 31, 2021. She was just weeks away from turning 100.

White’s death inspired countless tributes. But on social media, it also prompted a familiar anti-vaccine narrative that falsely linked her death and the COVID-19 vaccines — much like the baseless rumors that took off after the deaths of baseball legend Hank Aaron, boxer Marvin Hagler, rapper DMX and other celebrities.

The purported White quote is fabricated.

PolitiFact and other fact-checkers found no record of White making any such statement, and the Associated Press reported that she did not get a booster on Dec. 28.

Facebook posts sharing the quote were flagged as part of the platform’s efforts to combat false news and misinformation on its News Feed. (Read more about our partnership with Facebook.) 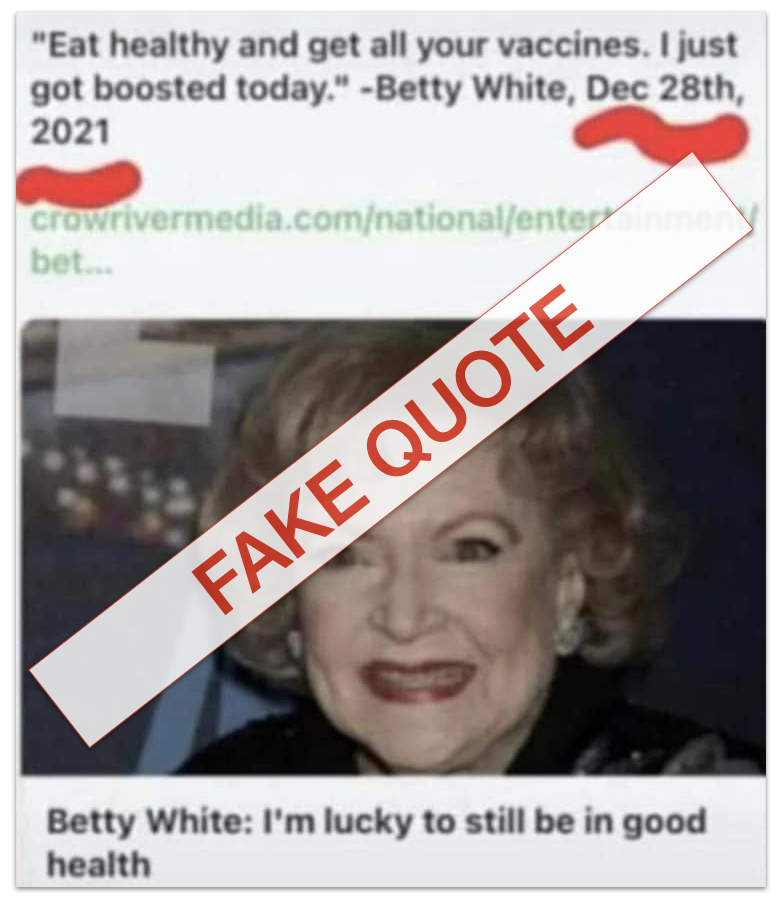 Some of the Facebook posts included a link to an article on crowrivermedia.com, a website operated by MediaNews Group, a Denver-based newspaper publisher.

The cause and manner of White’s death had not been made public as of Jan. 3. Witjas previously told People she "died peacefully in her sleep at her home early this morning."

Unsupported and false claims blaming the COVID-19 vaccines have routinely cropped up in the wake of celebrity deaths, even though the vaccines have proven to be safe.

"You can get a COVID vaccine and still die from something else," Dr. Paul Offit, director of the Vaccine Education Center at the Children’s Hospital of Philadelphia, previously told PolitiFact.

Since the quote is fabricated, we rate these Facebook posts Pants on Fire!