The live-stream of Donald Trump’s Arizona rally from Right Side Broadcasting, a right-wing website known for streaming Trump’s events, took a conspiratorial turn when one attendee insisted that California Gov. Gavin Newsom had been executed and replaced with a clone.

"Newsom’s a clone, OK? They just took him out," the rally goer told RSBN’s Brian Glenn before the Jan. 15 event in Florence, Arizona. "The real Governor Newsom has had his military tribunal at Gitmo. He’s been executed. OK?"

The claim appeared to be a reference to recent articles on Real Raw News, a misinformation website that regularly publishes made-up stories alleging that various public figures have been arrested by the military, transported to Guantanamo Bay, tried and executed. Similar narratives have taken hold in the past among some supporters and promoters of the QAnon conspiracy theory.

This nonsense storyline — arrested by military, executed at Gitmo and replaced by the deep state with a clone — is a regular narrative on the conspiracy theory website Real Raw News. The site has spun the same misinformation about Newsom in recent months. https://t.co/0cxHti9Gkv https://t.co/9AhjTthWuo

The headline, which followed months of similar posts spinning a wildly fictitious narrative about the Democratic California governor, was flagged as part of Facebook’s efforts to combat false news and misinformation on its News Feed. (Read more about our partnership with Facebook.)

In the alternative universe of Real Raw News, Newsom was indicted by the military in July; arrested, sent into a COVID-19 vaccine-induced coma, shipped off to Guantanamo Bay, and replaced by the "deep state" with a doppelganger in November; tried before a military tribunal in December; and sentenced to death for treason and child sex crimes in early January.

PolitiFact rated the claim that the military arrested Newsom Pants on Fire, and none of the related stories on Real Raw News are true.

Erin Mellon, a spokesperson for Newsom, confirmed that her boss was still alive and working in California, not in jail. "There is absolutely no truth in this whatsoever," Mellon said.

In recent weeks, Newsom held an hours-long press conference about his proposal for the state’s budget, visited an encampment of homeless people, and hosted several other events.

On Jan. 18, three days after the Trump rally goer relayed the baseless execution claim in his interview with Right Side Broadcasting, Newsom participated in an announcement related to a plan for investing in California students’ higher education. 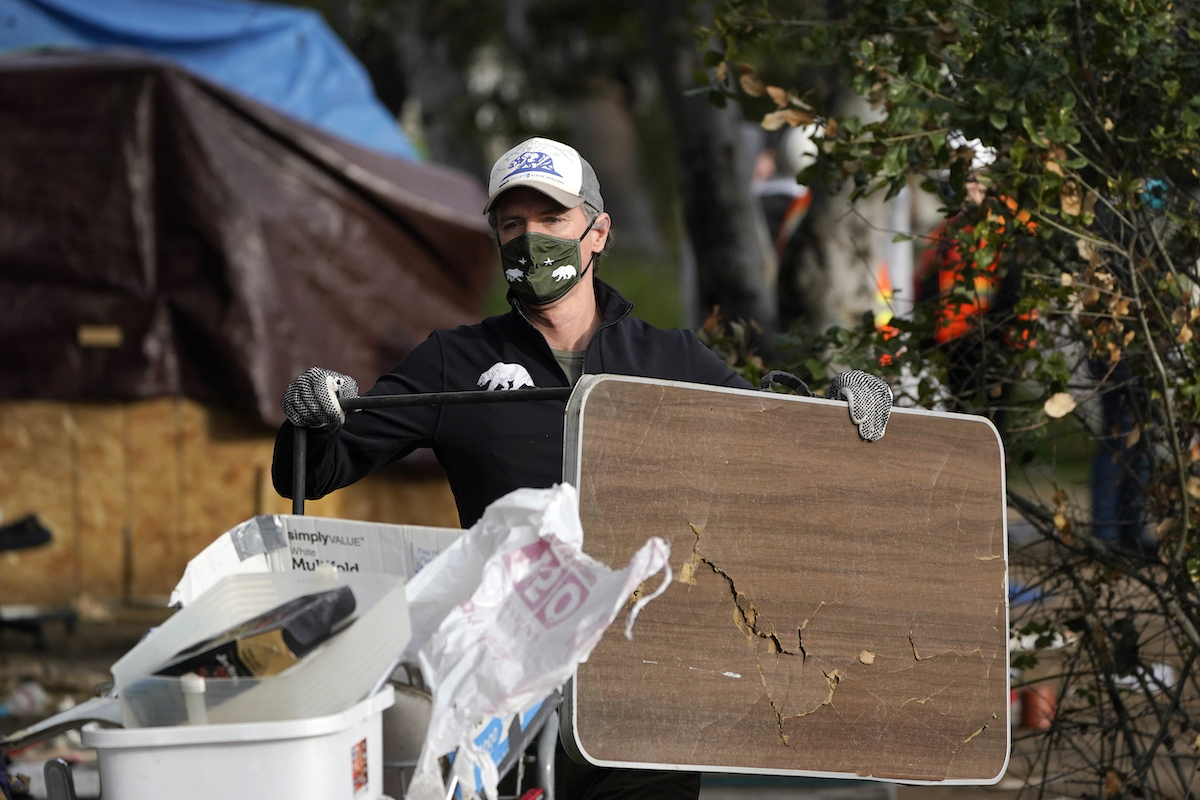 A PolitiFact investigation in September found that Real Raw News is authored by a 53-year-old man, Michael Tuffin, who previously ran several other websites and associated YouTube channels that also promoted far-fetched conspiracy theories. His websites publish information under the pseudonym "Michael Baxter."

The website’s "About Us" page features a disclaimer saying it contains humor, parody and satire, but the author of the articles often insists in the site’s comment sections that the content is legitimate, and the Right Side Broadcasting interview indicates that some people believe the type of content he pushes.

The website’s latest claims about Newsom have no basis in reality.

We rate them Pants on Fire!