From Pyongyang to Singapore, a quick history of Dennis Rodman and North Korea

While President Donald Trump and North Korea’s Kim Jong Un prepared for a first-of-its-kind summit to discuss nuclear weapons, one man with connections to both leaders issued a tearful, televised plea for a positive outcome.

Speaking live from Singapore ahead of the meeting, former NBA player Dennis Rodman wore a red "Make America Great Again" hat and a shirt advertising a cryptocurrency for cannabis as he told CNN’s Chris Cuomo about how happy he was to be part of "a great day."

Rodman’s ties to Kim blossomed during a controversial visit to North Korea in early 2013, when he called Kim "a friend for life." Since then, he has been an advocate for improved U.S. relations with North Korea, despite pressure at home concerning the effectiveness and ethical propriety of his so-called "basketball diplomacy."

"I said to everybody, the door will open," Rodman told Cuomo as he wiped away tears from beneath his sunglasses during the interview. "When I went back home, I got so many death threats … but I kept my head up high, brother. I knew things were going to change. I knew it, I was the only one."

As Cuomo noted, Rodman is one of the few people on the planet who can claim good relations with both Kim and Trump. Rodman twice appeared on Trump’s television show, The Celebrity Apprentice.

But how did Rodman, a five-time NBA champion once nicknamed "The Worm," become America’s unlikely and unofficial ambassador to the world’s most repressive regime? We decided to revisit the history of Rodman’s relationship with North Korea leading up to the summit. (As far as we know, his services were not required in Singapore.)

Rodman first visited the North Korean capital, Pyongyang, in March 2013. He was joined by three members of the Harlem Globetrotters and a Vice Media team filming a documentary. Kim, a basketball fanatic who inherited his father’s affection for Rodman’s Chicago Bulls, had invited Rodman, and the two sat courtside together to watch an exhibition basketball game featuring 12 North Korean players and the three Globetrotters.

A birthday song and CNN outburst

Rodman returned to North Korea again in September 2013, when he held Kim’s baby daughter, and once more in December 2013, when he trained North Korean basketball players for an exhibition game to be held on Jan. 8, 2014, Kim’s birthday. The game went as scheduled, with Rodman again sitting with Kim as they watched the North Koreans compete alongside several former NBA players.

That trip took a controversial turn when, after the exhibition, Rodman stepped onto the court to lead the crowd and players in bowing and singing "Happy Birthday" to Kim.

Later, in a CNN interview defending the trip, Rodman made more headlines when he railed at Cuomo and suggested that American missionary Kenneth Bae, who was being held prisoner by North Korea at the time, might not deserve to be released. "Kenneth Bae did one thing ... If you understand what Kenneth Bae did," he said. "Do you understand what he did in this country? No, no, no, you tell me, you tell me. Why is he held captive here in this country, why?"

In the face of heavy criticism, Rodman eventually apologized for his comments and penned a letter to Kim asking that Bae be set free. North Korea released Bae later that week. 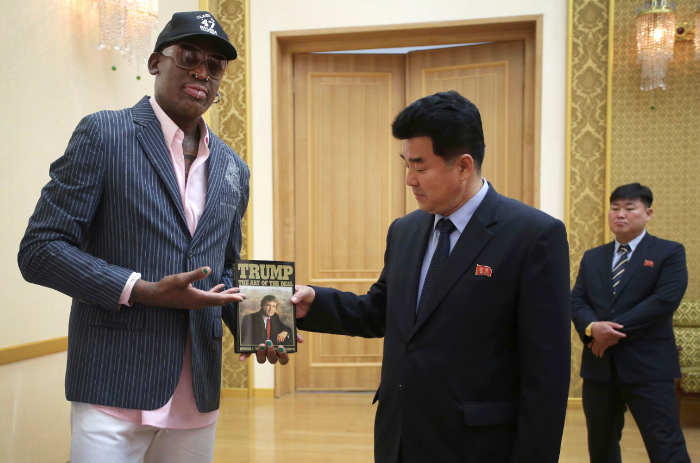 Rodman did not return to North Korea until 2017, when PotCoin, the cryptocurrency, sponsored a trip to Pyongyang that coincided with the release of Otto Warmbier, a college student who had been imprisoned in 2016 on charges of stealing a propaganda banner. During that visit, Rodman presented a copy of "The Art of the Deal," Trump’s 1987 book on negotiation strategy, to a North Korean diplomat as a gift for Kim.

Rodman had endorsed Trump’s campaign for the presidency two years earlier, in July 2015.

"I think (Kim) didn't realize who Donald Trump was at that time, I guess, until he started to read the book and started to get to understand him," Rodman said in a May interview with TMZ.

In his interview with Cuomo, Rodman said the summit would leave Kim more familiar with Trump than ever before — but he added that he did not want to take too much credit.

After the summit, Rodman took to Twitter to share a photo with former homeland security advisor Tom Bossert. "We had a great conversation about my trips to Pyongyang opening the doors and what a tremendous job @POTUS Trump has been doing and the historical results he had today," he wrote.

Good meeting former Homeland Security advisor @TomBossert45 today in Singapore. We had a great conversation about my trips to Pyongyang opening the doors and what a tremendous job @POTUS Trump has been doing and the historical results he had today. #MakeAmericaGreatAgain#USA pic.twitter.com/Bk8wParAQS

The Washington Post, "Dennis Rodman might go to Singapore. Here’s the story of his friendship with Kim Jong Un," June 6, 2018.

Brian Kilmeade
stated on July 2, 2020 an episode of "Fox & Friends":
The President’s Daily Brief “is like a mini novel.”

Facebook posts
stated on June 17, 2020 a Facebook post:
Says Maine Gov. Janet Mills is “using taxpayer money to buy cars for those on welfare, without a public hearing on the rules. If someone on welfare sells the car for cash without the state’s approval, the rules don’t allow the state to prosecute them for car theft.”

Facebook posts
stated on June 9, 2020 a Facebook post:
The Buffalo protester pushed to the ground “had been previously arrested 300 times. 82 times for incitement. Riots is what he does for a living.”

Donald Trump
stated on June 9, 2020 a tweet:
"Buffalo protester shoved by Police could be an ANTIFA provocateur. 75 year old Martin Gugino was pushed away after appearing to scan police communications in order to black out the equipment ... Was aiming scanner. Could be a set up?"

Viral image
stated on June 5, 2020 a Facebook post:
A man’s injuries from falling after police officers shoved him in Buffalo, N.Y. were staged.

Donald Trump
stated on May 30, 2020 a tweet:
During protests outside the White House, Mayor Muriel Bowser "wouldn't let the D.C. Police get involved."