Did the media ‘change the identity’ of the El Paso shooter?’ Nope

Law enforcement officials block a road at the scene of a mass shooting at a shopping complex Sunday, Aug. 4, 2019, in El Paso, Texas. (AP)

After police identified a suspect in the El Paso mass shooting, social media users started speculating about his motive. And some claimed the media changed his identity altogether.

On Aug. 4, the Facebook page Qanon NC, which takes its name from a broad conspiracy theory popular among supporters of President Donald Trump, published a photo of two New York Post headlines side-by-side. The first shows a mugshot of 21-year-old Patrick Crusius, whom police have identified as the El Paso gunman, while the second purports to show a photo of the same person. The man in the first mugshot appears to have darker hair and skin than the person in the second.

"They just CHANGED the identity of the El Paso shooter and nobody freaking noticed," the post claimed. 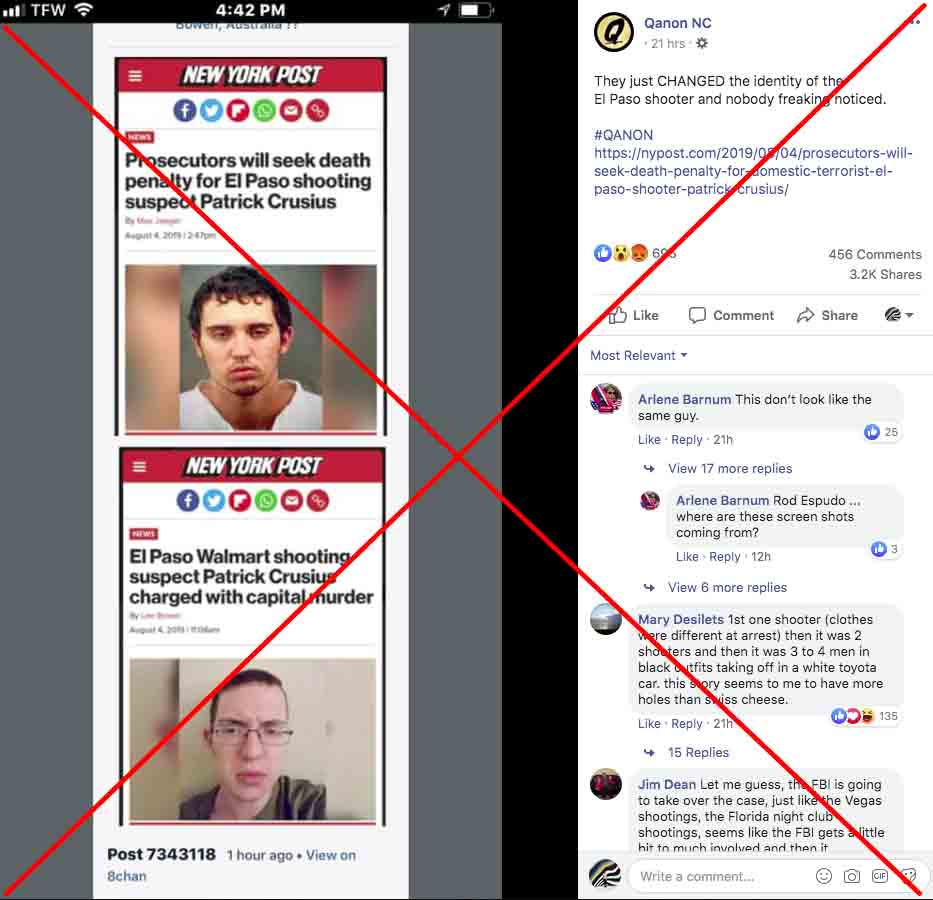 PolitiFact emailed the New York Post to ask about the change of photo. We’ll update this story if we hear back.

On Aug. 5, the El Paso Police Department released a mugshot of Crusius. The image appears to be the same one that the New York Post included in its later article about the suspect.

We reached out to El Paso police to ask if they know whether the earlier photo also depicts Crusius. We’ll update this story if we hear back.

The Post isn’t the only media outlet to use the other photo. A reverse image search surfaced several other news organizations using the same photo of the suspect.

KTVT, the CBS affiliate station in Dallas, attributed the photo to the suspect’s Facebook page. Heavy reported that his profile was deleted sometime after the shooting, so PolitiFact could not access it.

The newspaper listed Crusius as the suspect in both of its stories and has not deleted or corrected its previous story. It’s likely the photo that media outlets initially published was out-of-date; KTVT used both in its coverage, as did WFAA, which aired a screenshot of the older photo on Facebook. That screenshot, which PolitiFact could not independently verify since Crusius’ profile has been deleted, showed an upload date of June 10, 2017.