Fifty years ago this Saturday, Neil Armstrong and Buzz Aldrin became the first humans to set foot on the moon. But not everyone believes it.

Almost as soon as the Apollo 11 spaceflight landed at Tranquility Base on July 20, 1969, conspiracy theories about the mission were born. In December of that year, the New York Times published an article with the headline "A Moon Landing? What Moon Landing?" about groups of people that claimed the entire thing was a well-orchestrated government hoax.

Since then, hoaxes about the moon landing have taken off. Here at PolitiFact, we’ve debunked several lunar conspiracies over the years, including that a photo comparison of Armstrong’s boots and footprints disproves the event. (That’s False.)

Armstrong himself has addressed a wide variety of hoaxes about his achievement, as documented in a 2007 book:

"It would have been harder to fake it than to do it."

Polling shows the crowd of anti-mooners is small — just 6% of Americans in 1999 — but conspiracies have only become more visible in the internet age.

Social media platforms provide ample space for such hoaxes to reach new audiences. Popular YouTubers like Shane Dawson openly question the moon landings, racking up millions of views in the process. Thousands of Facebook users congregate in groups to discuss the latest "proof" that the moon landings never happened. There’s an entire subreddit dedicated to the hoax.

But who started the Apollo conspiracy in the first place — and why do people keep sharing them today? PolitiFact went back in time to investigate.

One giant leap for conspiracies

Bill Kaysing is considered to be the granddaddy of moon landing hoaxes.

Kaysing, a former U.S. Navy officer, self-published a book in 1976 titled "We Never Went to the Moon: America's Thirty Billion Dollar Swindle" — four years after the 17th and final Apollo moon landing. In it, he and co-author Randy Reid describe, without evidence, an elaborate government plot to make it look like NASA sent astronauts to the moon when it hadn’t.

The basis for their conspiracy goes like this: They say NASA lacked the technical expertise to send someone to the moon, stars don’t appear in some lunar photographs, and astronauts wouldn’t be able to survive a trip to the moon because of radiation exposure. As PolitiFact and others have pointed out, those kinds of claims don’t hold up to independent scrutiny. 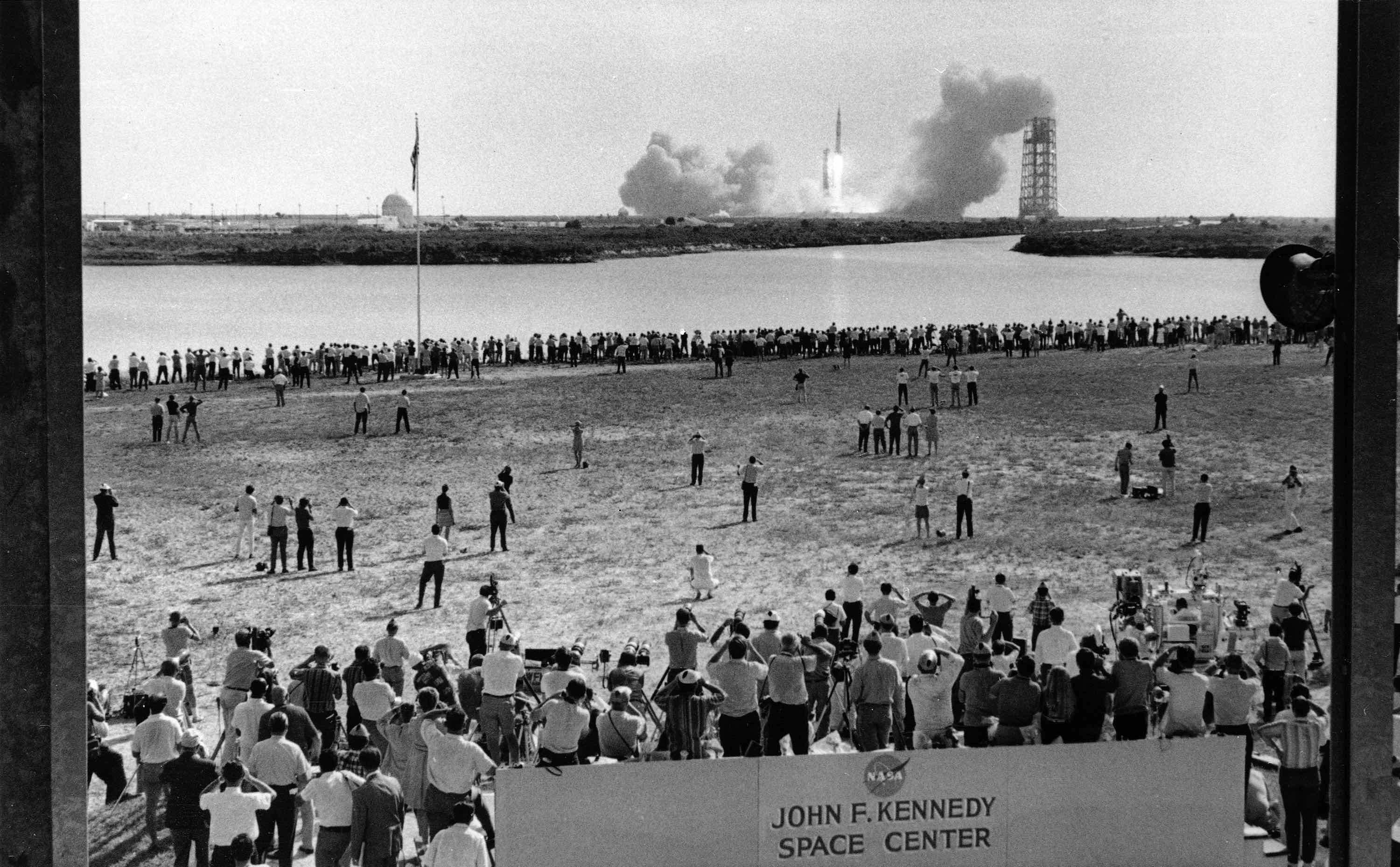 Thousands of newsmen and photographers line the banks of a lagoon at the Cape Kennedy Press Site on July 16, 1969, as the Saturn 5 Rocket with Apollo 11 astronauts aboard thunders from its launch pad three and a half miles away. (AP)

"His rationale offered poorly developed logic, sloppily analyzed data and sophomorically argued assertions," Roger Launius, former chief historian for NASA, wrote in an article for Smithsonian in May, which summarizes some of the most persistent conspiracies about the Apollo missions.

Kaysing had previously worked as a senior technical writer for Rocketdyne, a company that built the rockets that aided the Apollo space missions. His book was by far the most comprehensive rebuke of the moon landings, laying the groundwork for future hoaxes.

And the time was ripe for them.

In 1974, Richard Nixon resigned the presidency amid the Watergate scandal, contributing to a decades-long deterioration of public trust in the government. That event, coupled with other crises of the period, at least partially contributed to the spread of hoaxes.

"The initial event occurred around the time that the U.S. was facing significant political disruptions and tragedies: the (Martin Luther) King (Jr.) and (John F.) Kennedy assassinations, the Vietnam War and increasing student unrest," said Mark Fenster, a law professor at the University of Florida who has written extensively about conspiracy theories, in an email to PolitiFact. "As an anomalous event that occurred in the midst of that, the moon landing got swept up in a period of distrust in government."

The film "Capricorn One" in 1977 also provided ammunition for conspiracists, many of whom claimed the moon landing was filmed in a Hollywood studio. The movie focuses on a fictionalized NASA plot to fake a Mars mission.

"Although the director, Peter Hayms, did not believe Apollo had been faked, he was nevertheless fascinated by the notion that such a hoax was possible," Andrew Chaikin, an author and science journalist, wrote in the 2007 NASA book. "Interestingly, he had written the script in 1972 but met strong resistance to the idea in Hollywood. By the late 1970s, when he sold the film, that resistance was gone." 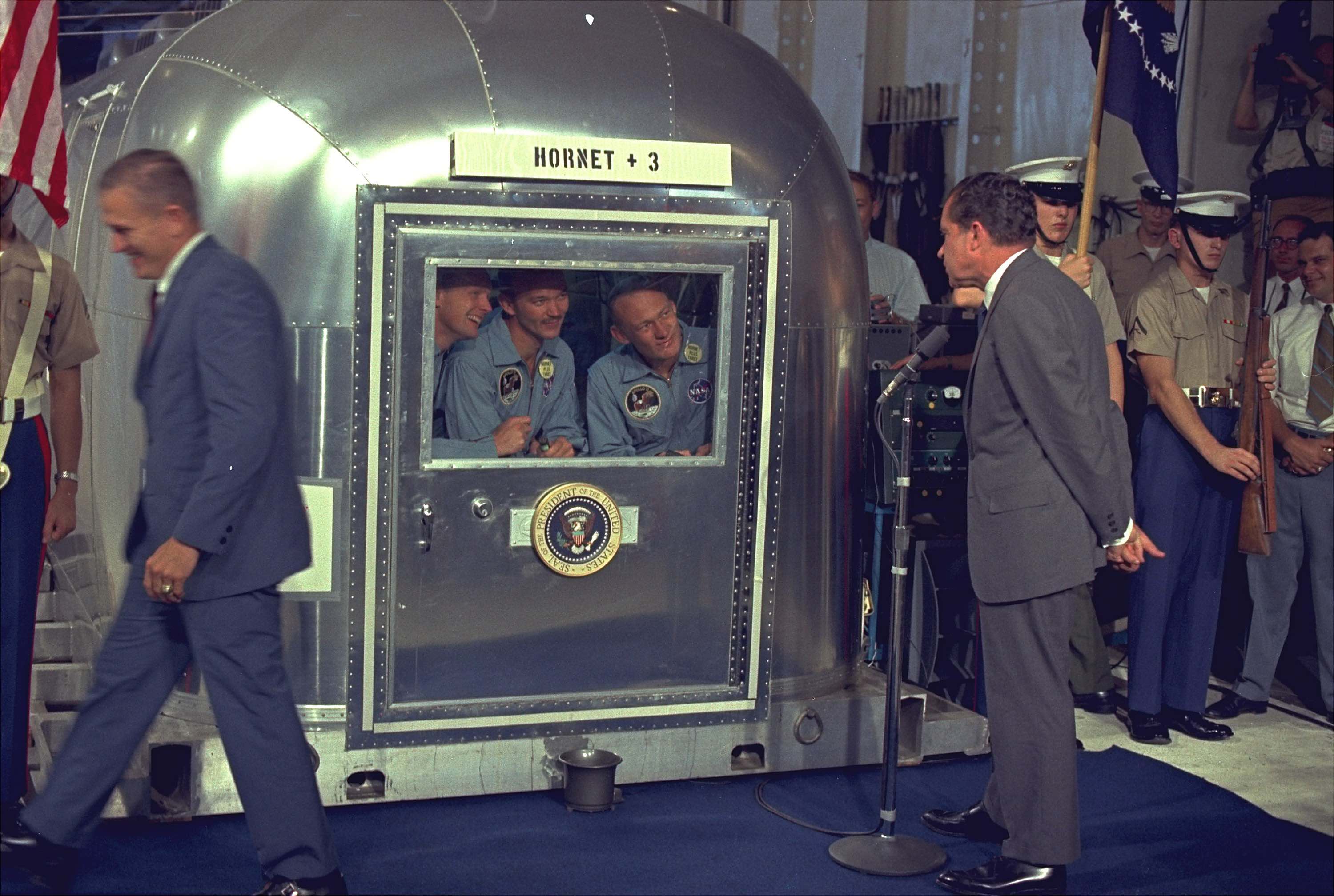 President Richard Nixon looks at the Apollo 11 astronauts in the isolation unit aboard the USS Hornet after splashdown and recovery, July 24, 1969. (AP)

Then, in 1980, the International Flat Earth Research Society, which falsely claims the Earth is flat instead of spherical, accused NASA of faking the moon landings. The organization claimed, without evidence, that the agency had staged the events in Hollywood with a Walt Disney partnership — all of which was directed by the famous film director Stanley Kubrick.

A slate of other conspiracy theorists continued to spread hoaxes throughout the 1980s and 90s, but none achieved the kind of success that Kaysing had.

In a film titled "A Funny Thing Happened on the Way to the Moon," writer Bart Sibrel claimed to show that "the Apollo 11 astronauts never actually landed on the moon." Fox TV broadcasted a similar program the same year titled "Conspiracy Theory: Did We Land On The Moon?"

These days, moon landing conspiracists don’t broadcast their false beliefs in self-published pamphlets or feature-length documentaries. Instead, they rely on their Instagram feeds and Facebook groups.

Using CrowdTangle, an audience analytics tool, and reverse image searches, PolitiFact tracked down where Facebook users have shared the moon landing hoaxes we’ve debunked in the past. Examples include that a Chinese rover found no evidence of the American moon landing (Pants on Fire!) and that Aldrin encountered alien life (also Pants on Fire!).

In one group we found, which has more than 55,000 members, Apollo conspiracies are fairly popular. When PolitiFact asked the group about their beliefs, or lack thereof, in the moon landing, some pointed to the lack of stars in photos taken on the moon as proof that no one was actually there. (History.com has debunked that notion.)

Then there are entire groups dedicated solely to the moon hoax itself.

In one of the most popular groups we could find, which falsely claims in its bio that the Apollo missions sent unmanned vehicles into space, members regularly share photos, articles and memes that they say help back up their allegations. 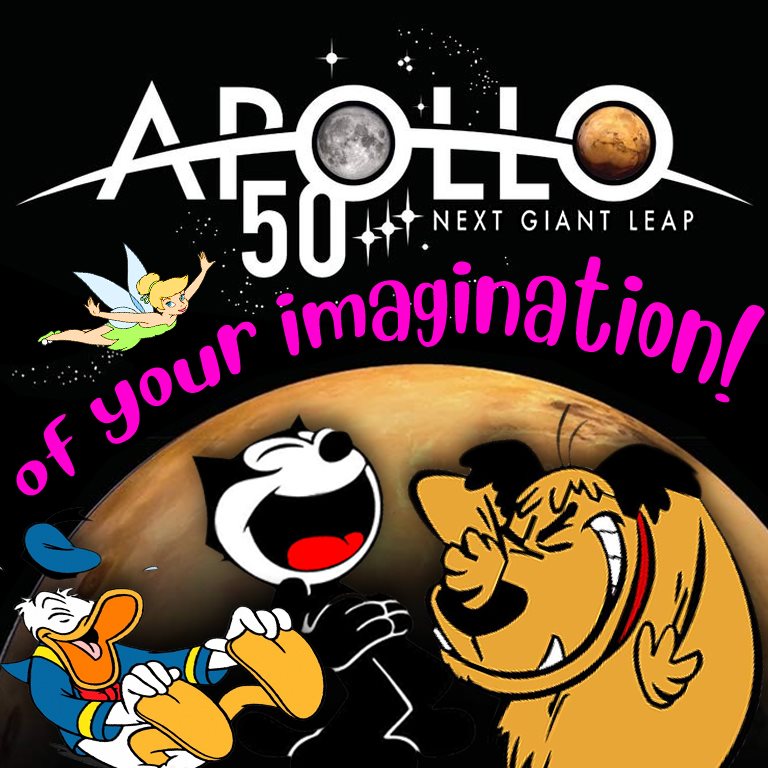 We found the same moon landing hoaxes that we previously debunked on Pinterest and Tumblr, too. A search for "moon landing hoax" on Instagram yielded more than 11,000 posts. Then there’s YouTube, where a variety of videos contain misinformation — which are often cross-posted on a subreddit dedicated to the conspiracy. Amazon sells shirts that suggest the Apollo missions were staged.

Why? Ted Goertzel, an emeritus professor of sociology at Rutgers University at Camden, told PolitiFact that it has to do with perceived scientific elitism.

But recently, moon landing hoaxes have taken on a more casual tinge.

The New York Times identified a few online influencers who have given new life to the hoax that the Apollo missions never sent a man to the moon. Shane Dawson has an entire video dedicated to the conspiracy, only to say halfway through that "it’s a theory." Joe Rogan, a famous stand-up comedian and podcast host, has made similar remarks about conspiracies in the past.

But the internet and social media have also opened up the doors for more debunking of moon landing conspiracies. Clavius.org, an organization of "amateurs and professionals devoted to the Apollo program," regularly debunk hoaxes about the moon landings. Organizations like ours also fact-check such conspiracies, the future reach of which can be decreased through our partnership with Facebook. (Read more about that here.)

"It’s not clear to me that social media has changed the narratives or vastly increased the number of believers," Fenster said. "It makes them believable, but just because it’s easier to find someone willing to say they believe in the flat earth theory doesn’t mean more people believe in it."

The Atlantic, "How the Vietnam War Broke the American Presidency," October 2017

Email interview with Mark Fenster, law professor at the University of Florida

The New York Times, "Vocal Minority Insists It Was All Smoke and Mirrors," July 13, 2009

PolitiFact, "Flat-out wrong: Rapper B.o.B. duels with Neil deGrasse Tyson over whether Earth is round," Feb. 1, 2016

PolitiFact, "No, these photos of Neil Armstrong’s space boots and a footprint don’t disprove the moon landing," May 7, 2019

Smithsonian magazine, "Yes, the United States Certainly DID Land Humans on the Moon," May 16, 2019