Who is John Solomon? Here’s what we know about the journalist whose stories shaped the Ukraine saga

A tweet from President Donald Trump is displayed as former U.S. Ambassador to Ukraine Marie Yovanovitch testifies before the House Intelligence Committee in Washington on Nov. 15, 2019. (AP/Harnik)

Top diplomats have repeatedly linked President Donald Trump’s posture toward Ukraine to John Solomon, the journalist whose reports gave false credence to a number of Ukraine-related conspiracies that have found a receptive audience in Trump and some of his closest allies.

Solomon, 52, had been working until recently as an opinion writer at The Hill and is now a Fox News contributor. His columns were cited three times in the whistleblower complaint that helped spur House Democrats to open their impeachment investigation into Trump.

They’ve remained a focal point as the House investigates whether the Trump administration withheld military aid to pressure Ukrainian President Volodymyr Zelensky to publicly commit to an investigation of former Vice President Joe Biden and the 2016 election.

"Solomon’s reporting on Burisma, Hunter Biden and Ukraine election meddling has become inconvenient for the Democratic narrative," Nunes said in his statement, which came just one day after The Hill announced it would be reviewing, annotating and correcting Solomon’s columns.

So, who is John Solomon? The veteran Washington, D.C., reporter has become a regular on Fox News and a go-to source of information for Trump. A series of springtime articles he published about Ukraine helped kickstart the events at the heart of the impeachment inquiry.

His columns alleged corruption by Biden and a former ambassador and accused Democrats of working with Ukraine to hurt Trump’s chances in 2016. They gained traction as Trump, his allies and various Fox News hosts talked about them on TV and social media.

Who is John Solomon? 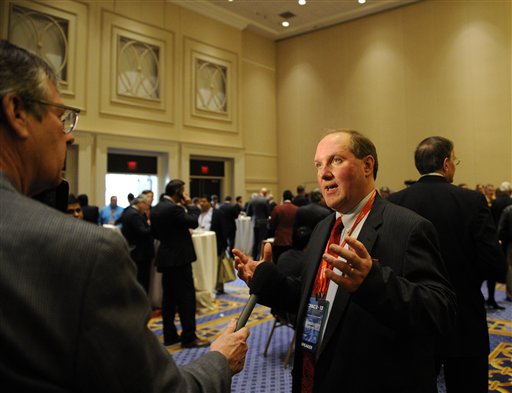 Solomon worked for years at the Associated Press and briefly at the Washington Post before moving to the Washington Times, where he was editor in chief. He later spent time at Circa and the Center for Public Integrity before joining The Hill in 2017.

Solomon won an award in 2002 for a series on what law enforcement knew ahead of the Sept. 11 attacks. But media critics also questioned his early work, saying he had a "history of bending the truth to his storyline" and "massaging facts to conjure phantom scandals."

Solomon’s commentary for The Hill has generated the most buzz. In 2017, he played a major role in pushing the inaccurate Uranium One conspiracy, alleging that Hillary Clinton sold a share of America’s uranium to Russia in exchange for a massive donation to the Clinton Foundation.

In 2018, The Hill began labeling Solomon’s articles as opinion. Then, in March and April 2019, Solomon published a series of columns alleging conspiracies involving Democrats and Ukraine.

According to the New York Times, Giuliani, whose activities were central to the administration’s efforts to get an investigation launched into Trump’s political rivals, gave Solomon a cache of information on Biden, his son Hunter and special counsel Robert Mueller’s Russia probe.

"I really turned my stuff over to John Solomon," Giuliani told the New York Times.

When Fiona Hill, Trump’s former top Russia expert, was asked during private testimony how she first learned about Giuliani’s "interest" in Ukraine, she mentioned Solomon, whose columns outlined the same conspiracies that Giuliani was actively pushing on Twitter and TV.

Senior State Department official George Kent later testified that what he had described as the "campaign of slander" against former U.S. ambassador to Ukraine Marie Yovanovitch began with one of Solomon’s articles and ended with Yovanovitch’s removal.

And Army Lt. Col. Alexander Vindman, director for European Affairs at the National Security Council, said he became concerned about Giuliani and the narratives he was pushing in part because of Solomon’s columns. State Department official Catherine Croft said the same.

Solomon’s methods have been further scrutinized since the impeachment inquiry began. In March, he shared an advance copy of a column with Giuliani’s associates, including recently indicted Ukrainian businessman Lev Parnas, who has reportedly helped connect him to sources.

Solomon left The Hill in September for undisclosed reasons, and Fox News soon hired him. He has stood by his work as "completely accurate and transparent," even as one impeachment witness after another has questioned his findings.

Solomon’s opinion articles on Ukraine have advanced a number of unsupported allegations about Yovanovitch, the Bidens and supposed Ukrainian meddling in the 2016 election.

He has had an assist from Fox News host Sean Hannity, Giuliani and Trump, who tweeted about Solomon’s work four times and recently suggested he should win a Pulitzer Prize.

Solomon has appeared on Hannity’s primetime TV show at least 55 times since March 20, according to our search via Nexis. He has been mentioned many more times, as well.

On March 20, Solomon went on Hannity’s show to promote a column he had published that day based on an interview he conducted with Yuriy Lutsenko, then the top prosecutor in Ukraine.

The column quoted Lutsenko falsely claiming that Yovanovitch gave him a list of people he should not prosecute, a charge the State Department denied and Lutsenko has since retracted. The column also claimed Yovanovitch had privately bad-mouthed Trump, citing a letter from former Rep. Pete Sessions, a Texas Republican, to Secretary of State Mike Pompeo.

Yovanovitch denied both allegations during her testimony.

But the allegations had already left their mark, having been promoted on Hannity and other Fox News programs, circulated within right-wing media and tweeted out by Trump and his oldest son, Donald Trump Jr. Yovanovitch was abruptly recalled from her post in May.

Other impeachment witnesses have criticized Solomon’s writing on Yovanovitch. Kent testified that Solomon’s article "was, if not entirely made up in full cloth, it was primarily non-truths and non-sequiturs." He later said he had "every reason to believe it was not true."

Vindman said all the "key elements were false," noting that Solomon’s columns "smelled really rotten" before joking, "His grammar might have been right."

Similar objections have been raised in testimony about two articles Solomon published about Biden in April, which were also referenced in the whistleblower’s complaint.

Solomon’s April columns asserted that then-Vice President Biden forced Ukraine to fire former prosecutor general Viktor Shokin in order to stop an investigation into Burisma Holdings, a gas company for which Hunter Biden served on the board. Solomon wrote that Biden withheld aid dollars from Ukraine as leverage to get Shokin removed.

There’s no evidence of wrongdoing by either Biden, as we’ve noted before. It’s not clear that the long-dormant investigation into Burisma had been reopened, as Solomon claimed, and Western leaders and institutions were united in wanting Shokin removed.

In his closed-door deposition, Kurt Volker, the former U.S. special envoy to Ukraine, said he believed Lutsenko — a key but questionable source in many of Solomon’s columns — was "making things up." He said Biden "was representing U.S. policy at the time."

"The allegations themselves, including those against Ambassador Yovanovitch, did not appear to me to be credible at all," Volker said during public testimony Nov. 19. "I’ve known Vice President Biden for a long time. Those accusations were not credible."

Volker calls the allegations against Marie Yovanovitch and Joe Biden not credible: "It's just not credible to me that a vice president of the United States is going to do anything other than act as how he sees best for the national interest." pic.twitter.com/vbrfP6HYXI

Solomon’s columns also alleged misconduct in Ukraine by Democratic donor George Soros and claimed, without much evidence, that Democrats coordinated with Ukrainian officials to interfere in the 2016 election by sharing dirt on Trump and reviving a 2014 investigation into former Trump campaign manager Paul Manafort, who had ties to the country’s old, pro-Russia regime.

These claims are unproven, and the U.S. intelligence community has concluded that it was Russia — not Ukraine — that interfered in the 2016 election, with the intent of helping Trump.

The Washington Post, "John Solomon leaves behind lasting damage at the Hill," Nov. 15, 2019

ProPublica, "How a Veteran Reporter Worked with Giuliani’s Associates to Launch the Ukraine Conspiracy," Oct. 25, 2019

The New York Times, "Giuliani Is Said to Be Under Investigation for Ukraine Work," Oct. 23, 2019

The New Yorker, "The Invention of the Conspiracy Theory on Biden and Ukraine," Oct. 4, 2019

The Hill, "How the Obama White House engaged Ukraine to give Russia collusion narrative an early boost," April 25, 2019

The Hill, "Ukrainian to US prosecutors: Why don't you want our evidence on Democrats?" April 7, 2019

The Hill, "Top Ukrainian justice official says US ambassador gave him a do not prosecute list," March 20, 2019

PolitiFact, "Who is Marie Yovanovitch, the former ambassador to Ukraine removed by Trump?" Nov. 14, 2019