Vice President-elect Sen. Kamala Harris, D-Calif., walks from the Senate chamber after voting against President Donald Trump's choice for the Federal Reserve Board of Governors, Judy Shelton, at the Capitol in Washington on Nov. 17, 2020. (AP/Applewhite)

"Harris is a woman who has yet to resign from the United States Senate in preparation of becoming the next vice president and ultimately president, if the media gets their way," he said Dec. 15. "Why hasn't she resigned yet? Because maybe, like all of us, she still thinks President Trump has a shot at victory, if only all the evidence of fraud can be proven and exposed."

There’s no evidence to back Stinchfield’s speculation. President-elect Joe Biden won the election, and electors across the country sealed his victory on Dec. 14 after weeks of litigation from Trump and his allies revealed no evidence of widespread fraud to change the results.

Harris’ decision to remain in the Senate for some time before becoming vice president is not unusual. She isn’t required to resign yet.

"No rule bars the vice president-elect from her day job representing California until she takes the oath on the 20th," said Terry Sullivan, a professor emeritus of political science at the University of North Carolina, Chapel Hill. "Then the constitutional ban on serving in two branches kicks in."

Anthony Rizzo, a spokesperson for Newsmax, said Stinchfield "was only speculating" as to why Harris had not left her seat. "He offered no conspiracy theory or claim she was not resigning for this reason," Rizzo said, adding that Newsmax recently declared Biden the president-elect.

Some commentators who have made similar suggestions about Harris’ continued work in the Senate, including fellow Newsmax host Greg Kelly, noted that former President Barack Obama resigned from his own Senate seat in mid-November before moving to the White House.

Obama’s resignation was historically early compared with other officials in his shoes. According to the New York Times, he resigned earlier than any other president-elect or vice president-elect over the last 50 years who held public office at the time of his or her election.

There are several reasons why Harris may want to stay in her seat. It’s possible she is waiting for California Gov. Gavin Newsom, also a Democrat, to appoint her successor. Holding her seat also allows her to vote on Senate matters or participate in committee hearings. 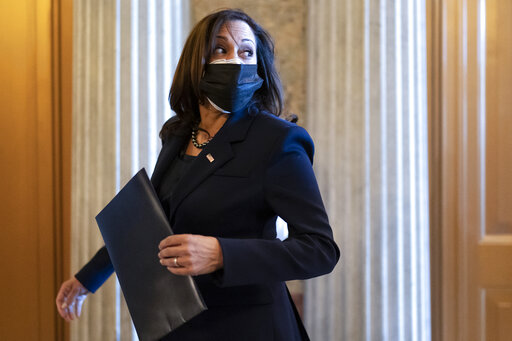 "It would only be prudent for Harris to keep her Senate seat until she becomes a member of the executive branch at noon Jan. 20, 2021," said James Pfiffner, a professor emeritus in the Schar School of Policy and Government at George Mason University. "The Senate might conceivably consider important issues between now and then."

"If her vote were important, she could resign the morning of the inauguration," Beermann added.

Harris may also want to be present if Republican senators object in January to the counting of Electoral College votes in a longshot attempt to overturn the results of the election, experts said.

One reason a senator in Harris’ position might resign early is "so a successor will be ahead in seniority, which can eventually impact committee assignments," said Aaron Crawford, assistant editor of the Papers of Andrew Jackson at the University of Tennessee, Knoxville.

One odd case occurred in 1961: Lyndon B. Johnson, a senator representing Texas, had run simultaneously for reelection to the Senate and for vice president on a ticket with President John F. Kennedy. He won both races. "He was actually sworn in (to the Senate) for the new term on Jan. 3 and then immediately resigned," Crawford said.

FiveThirtyEight, "Tracking Congress In The Age Of Trump," accessed Dec. 17, 2020

NBC News, "Who will replace Kamala Harris in the Senate? California governor weighs a shortlist of firsts," Dec. 13, 2020

PolitiFact, 'Casting and counting the electoral votes: What to expect," Dec. 10, 2020

Email interview with Jeffrey A. Engel, director of the Center for Presidential History at Southern Methodist University, Dec. 17, 2020

Email interview with James Pfiffner, professor emeritus in the Schar School of Policy and Government at George Mason University, Dec. 17, 2020

Email interview with Terry Sullivan, professor emeritus of political science at the University of North Carolina at Chapel Hill and the executive director of the White House Transition Project, Dec. 17, 2020