From the start of the impeachment inquiry to the Senate acquittal, conservative websites and social media users made false claims about the Clinton Foundation’s finances, repeated long-debunked hoaxes about targeted killings, and featured new fabrications about the family’s relationship to Supreme Court Chief Justice John Roberts, who presided over Trump’s impeachment trial. Other hoaxes falsely accused the foundation of spending most of its money on salaries or misleadingly tied Bill and Hillary Clinton to Russia.

If some of those allegations sound familiar, it’s because they are.

During the 2016 election, PolitiFact fact-checked several claims and conspiracies about the Clinton Foundation and Hillary Clinton’s presidential campaign. Some of the attention stemmed from the fact that, despite signing an ethics agreement as secretary of state in the Obama administration, Clinton broke the firewall between her State Department and foundation connections.

While misinformation about the Clintons is nothing new, the resurrection of Clinton conspiracies seems to fit a strategy that the president himself has used to deflect scrutiny. Even as Trump celebrated his acquittal by the U.S. Senate Feb. 6, he brought up grievances from the 2016 race.

"There’s this idea of a comparison — that I may have done something bad but these people did something way worse," said Lindsey Meeks, an assistant professor of communication at the University of Oklahoma. "And I think his followers and supporters would take up that same tactic."

Trump’s rhetoric and Hillary Clinton’s own media appearances provided fertile ground for conspiracies to resurface over the past few months.

But there was another reason for the resurgence: Clinton was tied to a conspiracy involving a missing computer server that Trump asked Ukraine President Volodymyr Zelensky about in a July 25 phone call. Some Republicans made similar claims during public impeachment hearings, pushing a broader falsehood that Ukraine meddled in the 2016 election on Clinton’s behalf.

The effect of that strategy was a distraction from Trump’s impeachment. But Young Mie Kim, a journalism professor at the University of Wisconsin-Madison, told PolitiFact that it is also meant to sow partisan division.

"And it has been successful," she said.

Here is some of the exaggerated or inaccurate content that we saw about the Clintons.

"High-ranking FBI officials are spilling the beans on a massive cover up involving Hillary Clinton, Bill Clinton, the State Department and a scheme that steered untold billions of tax dollars to the Clinton Foundation and Clinton associates," reads the lead from a Jan. 22 story from True Pundit, a pro-Trump misinformation site.

The article was flagged as part of Facebook’s efforts to combat false news and misinformation on its News Feed. (Read more about our partnership with Facebook.) It has been shared more than 4,600 times.

As evidence, the story points to a podcast that relies entirely on anonymous sources to report the story. We could find no evidence that it’s accurate. 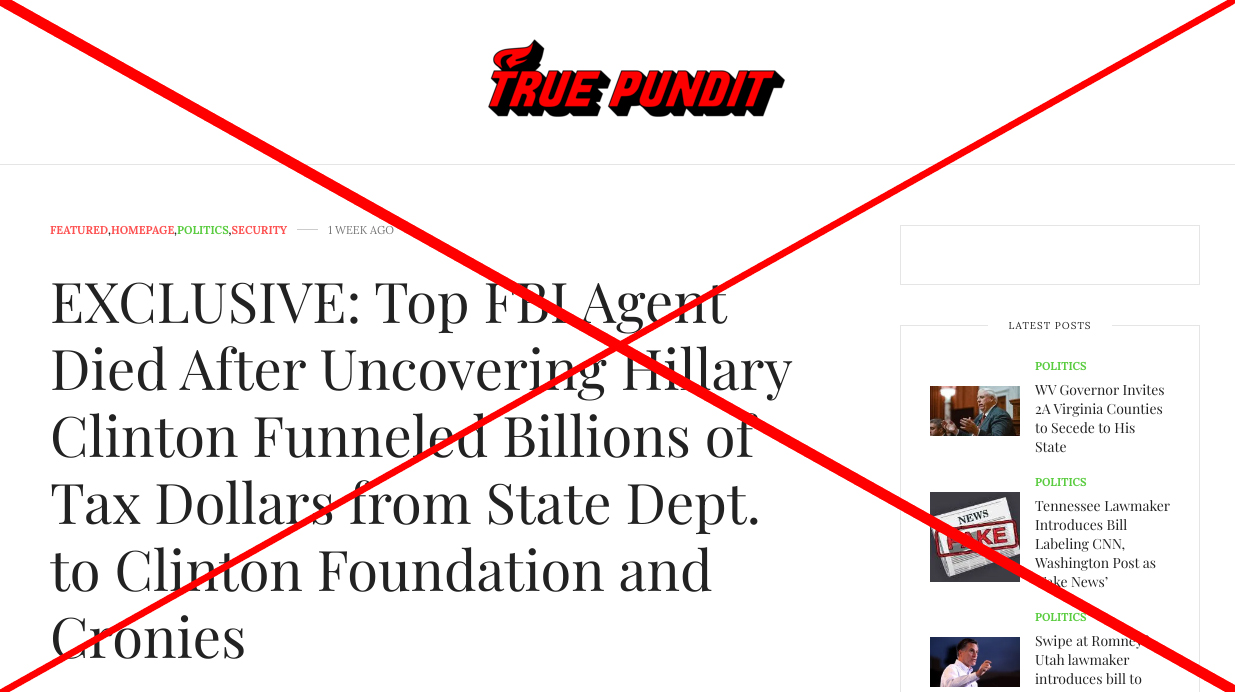 The man behind the claim appears to be Michael D. Moore, a man who publishes "frequently false stories to fire up the pro-Trump base" and operates under the pseudonym Thomas Paine, according to BuzzFeed News. His false stories "create the impression of being rooted in fact," the report said, by appearing to rely on anonymous sources or riffing off real events and documents.

Several other conspiracies about the Clintons gained traction on platforms like Facebook and Instagram. Together, they’ve been shared thousands of times — and some tried to connect the Clintons directly to the impeachment trial.

"The ‘Clinton Foundation’ took millions from Ukraine while she was Secretary of State," reads text over a photo of Hillary Clinton published Feb. 1. "Joe is not alone." 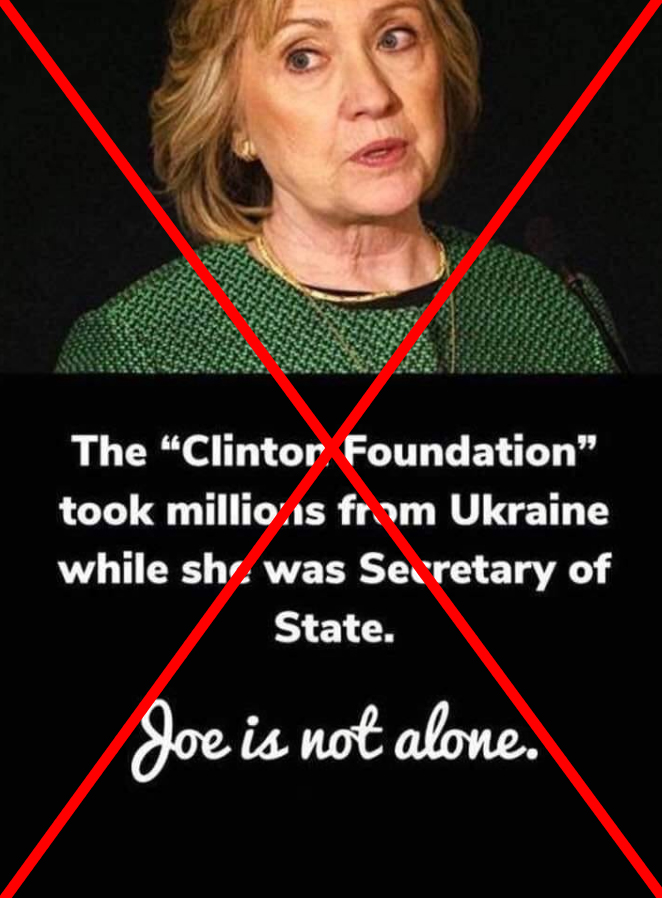 The photo is inaccurate — as Factcheck.org noted in October 2019. The meme’s sources are articles from conservative sites that falsely conflated the nationality of Clinton Foundation donors with Ukraine’s government.

That kind of misinformation reached a fever pitch in the last few weeks of the impeachment proceedings. But some conservatives had been pushing similar claims for months beforehand.

One of the most viral claims was tweeted by Charlie Kirk, founder of the conservative nonprofit Turning Point USA, in October.

"Does anyone else find it strange: The same woman who paid for a Russian dossier to win an election, whose husband made $500k for a Russian speech, who sold 20% of US Uranium to Russia, whose foundation received $150M from Russia, keeps calling others Russian assets?" Kirk said.

The post racked up more than 25,000 retweets. It eventually spread to Facebook, where conservative pages and users copied the text and added a photo of Clinton. (Several have since been deleted.) We rated the posts Mostly False. 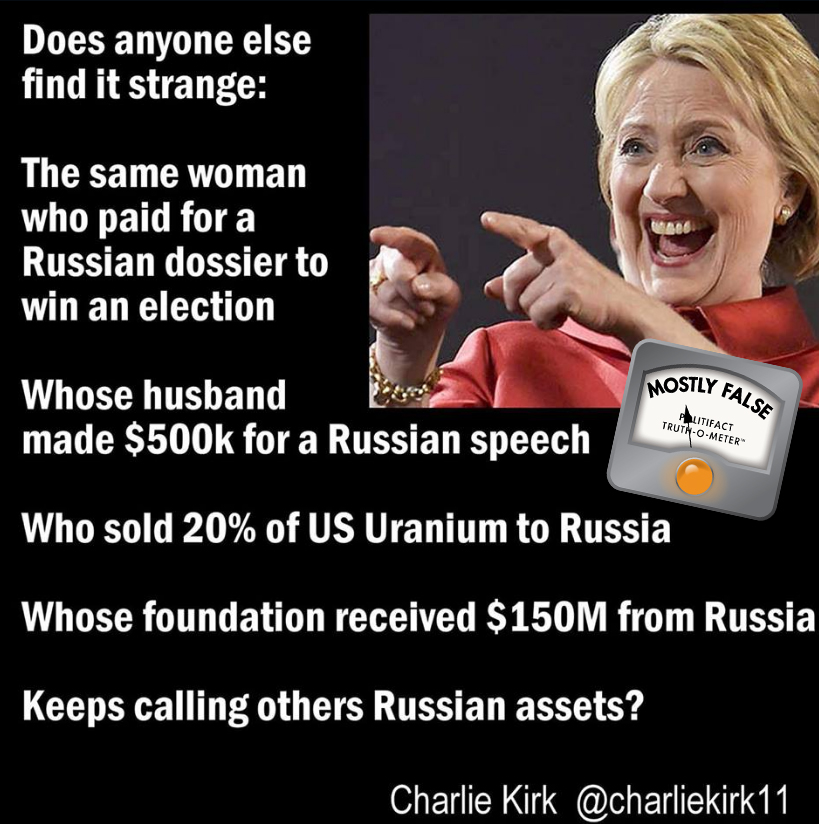 Kirk’s tweet contains a mix of truths, half-truths and exaggerations. While Bill Clinton did make $500,000 for a Russian speech, the claims about the dossier, Uranium deal and foundation revenue are misleading. We’ve also previously fact-checked claims from Turning Point USA, which targets high school students and college campuses.

Another post published Dec. 9 draws a more explicit line between Hillary Clinton and Trump, alleging that the former has received money from Russia while the latter hasn’t. 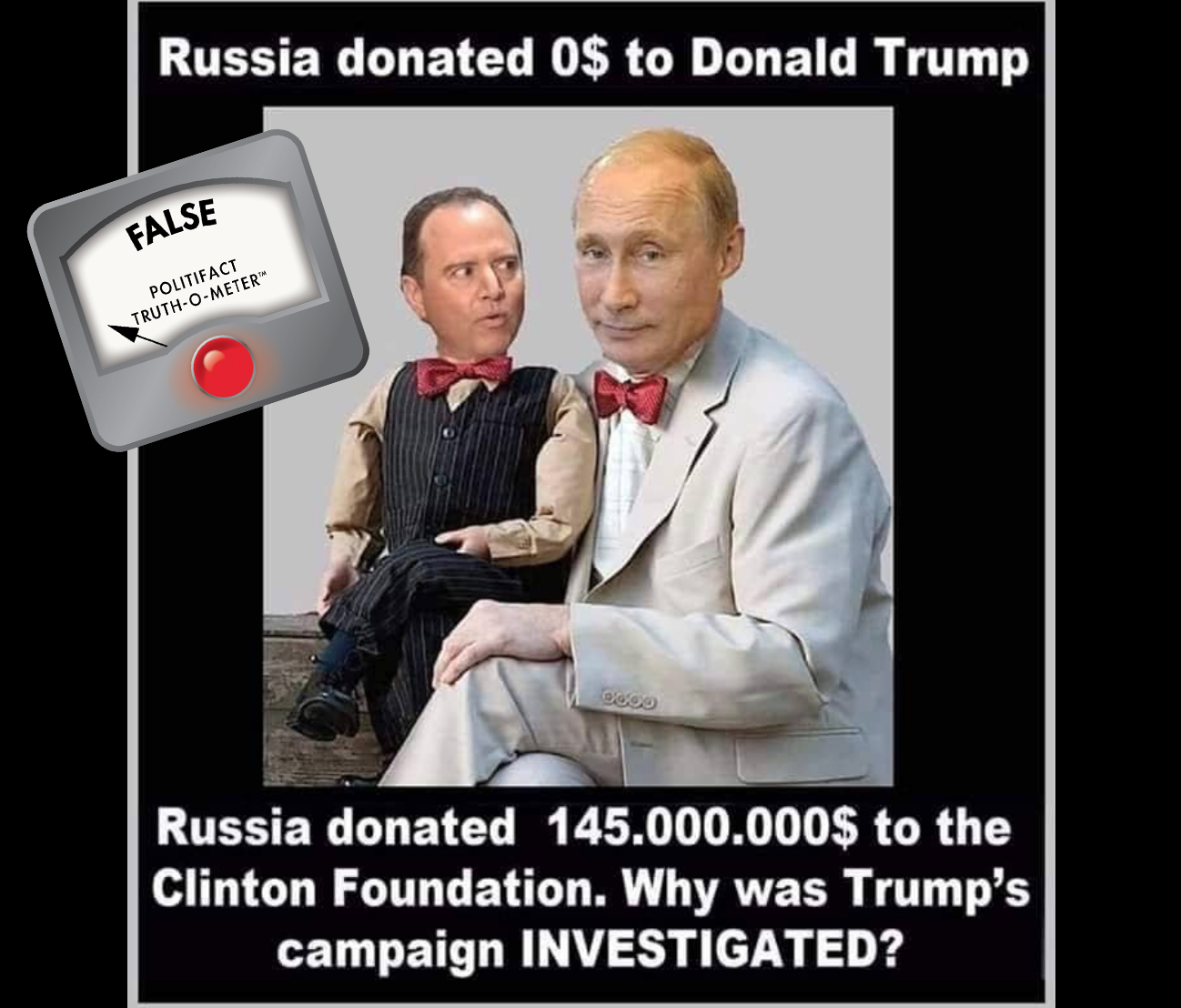 Like Kirk’s tweet, the post — which is False — twisted the facts about the Clinton Foundation’s finances. There’s no evidence that the organization received contributions from the Russian government. At best, investors with a business connection to Russia donated $4 million.

Still, the falsehood was shared thousands of times by several different conservative pages. Its source appears to be ACT for America, a group the Southern Poverty Law Center describes as "the largest anti-Muslim group in America."

Also in December, stories on conservative websites like Big League Politics wrote that Rep. Mark Meadows, R-N.C., said in a Fox News interview the week prior that "three whistleblowers have come forward with hundreds of documents exposing the illicit behavior of the Clinton Foundation." 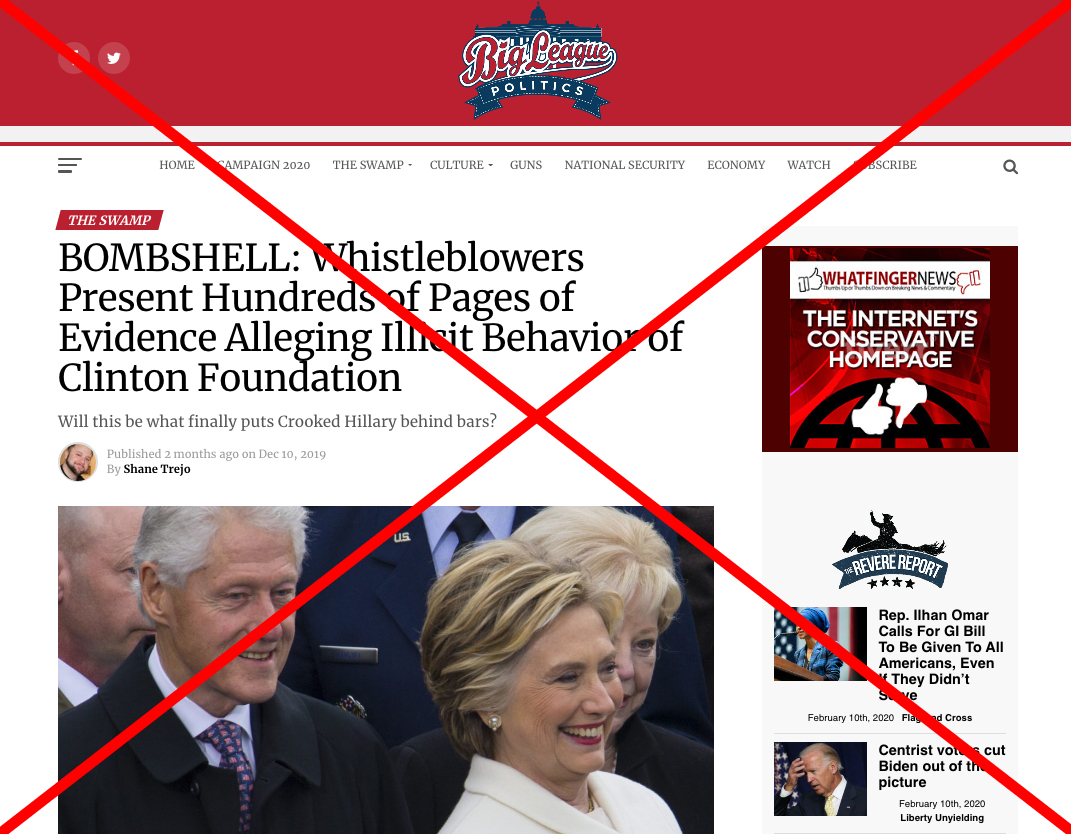 In fact, Meadows’ interview was in December 2018. And the investigative hearing he referenced ultimately did not prove any wrongdoing.

That kind of misinformation circulated as the House moved to impeach Trump, who has since been acquitted. But for the president’s base, falsehoods about the Clintons could reinforce its support of Trump in the lead-up to the 2020 election.

"It makes it so much easier to kind of protect your identity if you can just add on layers and layers on why these other people are bad or corrupt," Meeks said. "The more fuel you can add to why the other party, why the Democrats, are bad or wrong or more corrupt, you’re so much more willing to absorb that."

See a questionable post on social media? Send it to [email protected].

BuzzFeed News, "Revealed: Notorious Pro-Trump Misinformation Site True Pundit Is Run By An Ex-Journalist With A Grudge Against The FBI," Aug. 17, 2018

Christian Science Monitor, "How many Muslim extremists are there? Just the facts, please." Jan. 13, 2015

Interview with Joseph Uscinski, an associate professor of political science at the University of Miami, Dec. 12, 2019

Interview with Lindsey Meeks, assistant professor of communication at the University of Oklahoma, Dec. 13, 2019

PolitiFact, "An old hoax about the Clinton Foundation resurfaces on Facebook," Dec. 9, 2019

PolitiFact, "What we know about the Politico story at the heart of a Ukraine conspiracy theory," Dec. 3, 2019

Snopes, "Did Hyatt Hotels Ban Conservatives from Their Properties?" Oct. 5, 2018