How the coronavirus shook the stock market, explained

A trader walks across the floor of the New York Stock Exchange on March 9, 2020. (AP/Drew)

The stock market took a major hit on March 9, with the Dow Jones Industrial Average falling more than 2,000 points and the S&P 500’s early-morning plunge triggering an automatic, 15-minute trading halt known as a circuit breaker.

The market troubles came as traders, already on edge over the spreading coronavirus, reacted to escalating tensions between Russia and Saudi Arabia that led oil prices to suffer their biggest single-day drop since the Gulf War in 1991, according to reports.

President Donald Trump weighed in with tweets that celebrated low gas prices, downplayed the coronavirus and blamed Russia, Saudi Arabia and the media for the market drop.

The markets rebounded when trading opened the following day. Here’s what else you need to know about the stock market drop on March 9, 2020:

What happened to the stock market on March 9?

Minutes after trading opened on Monday, the S&P 500 fell by 7% in a drop so sharp that it triggered an automatic, 15-minute trading halt known as a circuit breaker.

For all three indexes, the sell-off marked the largest single-day point drop in history and the worst percentage slip since the 2008 financial crisis.

Why did it happen?

The turmoil came as talks among the world’s largest oil producers fizzled out over Russia’s refusal to back a proposal for nations to cut oil production.

The proposal was meant to keep oil prices stable amid shrinking energy demand brought on by the coronavirus outbreak, which has caused flight cancellations and factory slowdowns around the world and especially in China, the world’s largest importer of oil.

Russia would not agree to scale back its output, and Saudi Arabia responded over the weekend with a full-blown price war, slashing its oil prices in a bid to flood the market with cheap oil. That led oil prices to tumble in the biggest single-day decline since the Gulf War.

All that piled onto existing economic anxieties due to the coronavirus, which as of March 9 had infected 109,577 people across more than 100 countries, per the World Health Organization.

The coronavirus has taken sick or quarantining workers out of the office, rocked the travel and energy industries and slowed down companies that depend on China for manufacturing.

Trump spun the news on Twitter, noting that lowered gas prices would be "good for the consumer" and pinning the crash on the fallout between Russia and Saudi Arabia.

Saudi Arabia and Russia are arguing over the price and flow of oil. That, and the Fake News, is the reason for the market drop!

But while the oil tensions played a role, rising fear of the coronavirus and its potential impact on economic activity was the underlying and more likely cause of the March 9 stock market crash, said Gary Burtless, a senior fellow in economic studies at the Brookings Institution.

"Much of the drop in oil prices was spurred by energy traders’ fears of a drop in future economic activity arising from the disruption caused by the coronavirus," Burtless said.

"With each wave of outbreak, people who maybe weren’t taking it seriously do take it seriously," added Kathleen Day, professor at the Johns Hopkins Carey Business School and author of a book on financial crises.

Day said no one ever knows with complete certainty why the stock market moves, noting that the biggest hits to the economy tend to have compounding causes, and that the Trump administration has rolled back certain financial safeguards and regulations.

"Even without the coronavirus, even without a war between Putin and Saudi Arabia, there were already signs the economy was maybe softening," she said.

Why was there a 15-minute trading halt?

The stock-market drop began shortly after trading opened, with the S&P 500’s losses reaching 7% roughly five minutes in, according to the New York Times.

The 7% drop set off a 15-minute, mandatory market halt known as a circuit breaker, which is meant to prevent panic selling that would lead to even steeper declines in small time frames.

The earliest circuit breakers were put in place after a major stock market crash in October 1987, and they were later revamped in 2010 after they failed to prevent another crash.

March 9 was the first time the current circuit breakers, which went into effect in 2013, had been triggered during regular trading hours, according to CNBC. Burtless said they seemed to work as intended, since orderly trades resumed after the halt.

Still, the White House has faced pressure to reassure the markets and calm concerns that the economy could be tilting toward a recession. 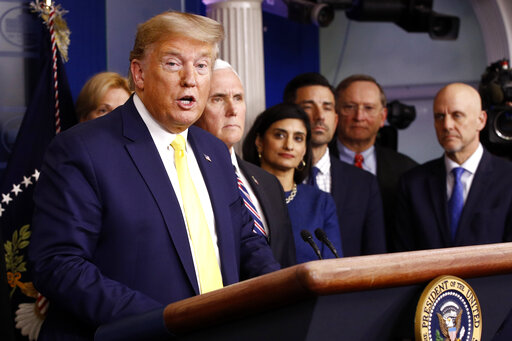 President Donald Trump speaks about the coronavirus outbreak at the White House in Washington on March 9, 2020. (AP/Semansky)

The Federal Reserve had already made an emergency cut to the benchmark U.S. interest rate, and Trump signed an $8.3 billion aid package to combat the spread of the new coronavirus.

On March 9, the Fed announced it would increase the amount of money it offers to banks for short-term funding, and Trump said he would ask Congress to temporarily cut payroll taxes, provide relief for hourly workers and offer assistance to travel-related industries.

But Ricchiuti said the U.S. has "few weapons left to boost the economy and the stock market."

"As for monetary stimulus, how much lower can the Fed push down interest rates?" he said. "They’re basically out of ammo."

"For fiscal stimulus, the U.S. owes too much money," he added. "And the federal deficit is about $1 trillion annually."

Should investors expect more such swings?

Investors can expect more such swings in the near future as the coronavirus continues to take its toll on people and the economy, experts told us.

Burtless said that when stocks drop dramatically, there are often large single-day swings in both directions — on the way down and in the early recovery.

"Small changes in the outlook can have outsize effects on some traders’ expectations about the future," he said. "Investors should probably anticipate that there will be many days in the next weeks and months with big one-day changes."

Day said she expects "many more swings" due to economic and political uncertainties, but just how many depends on how investors react to developments with the coronavirus outbreak.

"I think the stock market will go up and down more," she said. "But as an investor, you can’t react to it every day."

How could the economy change as the coronavirus spreads?

The silver lining, Ricchiuti said, is that consumers can take advantage of low interest rates and cheap prices at the gas pump.

But day-to-day life for working people could change as more people across the globe decide to work from home and more business activities go remote. A number of American companies have already told employees to work from home.

Some companies could discover that remote work doesn’t hurt productivity and decide to cut down on face-to-face meetings or office space going forward, Day said.

"Some things you can’t replace," Day said. "But because of the internet, some of the economic impact of this is going to be blunted."

Business Insider, "Oil is down 21% after its biggest drop in decades following Saudi price cuts that sparked a race to the bottom with Russia," March 9, 2020

CNBC, "Fed to step up cash injections for banks to guard against market pressure," March 9, 2020

CNBC, "The market triggered a ‘circuit breaker’ that kept stocks from falling through the floor. Here’s what you need to know," March 9, 2020

CNBC, "iPhone manufacturing in China is in limbo amid coronavirus outbreak," Feb. 10, 2020

Phone interview with Kathleen Day, professor at the Johns Hopkins Carey Business School and author of a book on financial crises, March 9, 2020