If Joe Biden is elected president, Americans who own certain kinds of guns may owe the federal government some money.

One Facebook post, published Oct. 29 by the page for a Texas-based apparel company, claims that Americans who own semi-automatic firearms or high-capacity magazines would be charged $200 per unit under the Democratic presidential candidate’s gun policy.

"Under Biden’s plan, all semi automatic firearms and 11+ round magazines will be registered under the NFA," the post says. "Each item requires a $200 tax to register. The total above is how much you will be charged to keep firearms and accessories you already own."

If a gun-owner doesn’t comply with the new tax, the Facebook post claims it will "make you a felon."

The post was flagged as part of Facebook’s efforts to combat false news and misinformation on its News Feed. (Read more about our partnership with Facebook.) Several other groups that support gun rights and conservative tax policies have published similar claims online.

The post includes a worksheet that gun-owners can use to purportedly figure out their tax burden under a Biden administration. It bears the logo of the Hawaii Firearms Coalition, an organization that describes itself as a 501(c)(4) organization based in Honolulu. We could not find it registered as such with the Internal Revenue Service. 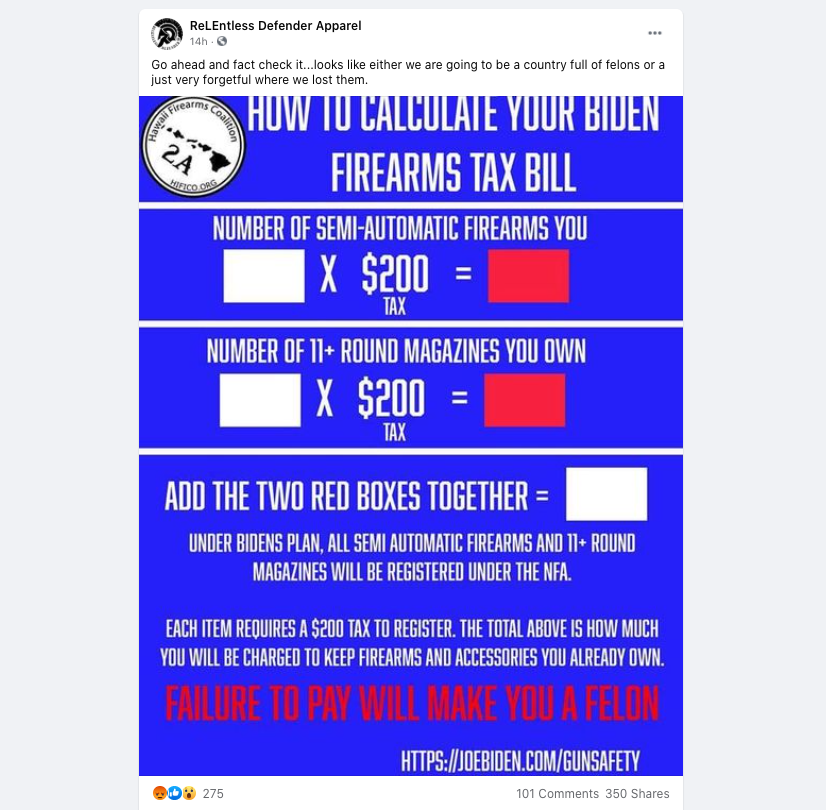 "Go ahead and fact check it," the apparel company wrote in its caption. So we did.

Biden has not called for a new tax on firearms. He opposes easy access to assault weapons and would ban their manufacture and sale. Existing weapons would be subject to new regulations.

He has proposed applying an existing federal law on machine guns to assault weapons — which can include semi-automatic firearms — and high-capacity magazines. That existing law includes a $200 tax.

Under Biden’s gun policy, Americans who own assault weapons or high-capacity magazines would have two options: sell them to the federal government through a voluntary buyback program or register them under the National Firearms Act.

The National Firearms Act (NFA) passed in 1934. The law imposed a tax on those who manufactured or traded firearms defined in the act, specifically short-barreled rifles and machine guns. It required owners of certain kinds of guns to register them with the Treasury secretary.

"Its underlying purpose was to curtail, if not prohibit, transactions in NFA firearms," the Bureau of Alcohol, Tobacco, Firearms and Explosives says on its website. "Congress found these firearms to pose a significant crime problem because of their frequent use in crime."

RELATED: Joe Biden says he will champion a ban on assault weapons, not all guns

The law imposed a $200 tax on firearms enumerated in the act, a tax that has not changed since 1934. Those who don’t comply with the tax could face fines or imprisonment, as well as a felony charge.

How would that law apply to what Biden has proposed?

In his platform, Biden links to a legislative proposal from the Giffords Law Center to Prevent Gun Violence, a nonprofit organization that supports gun control. The proposal calls for extending the NFA to "all existing assault weapons," namely by prohibiting the manufacture of future firearms or requiring them to be registered under the law.

The NFA currently regulates guns like short-barreled rifles and machine guns. Citizens who wish to transfer an NFA-regulated firearm must get approval from the federal government and pay tax.

Biden’s plan would extend those requirements to "assault weapons," a politicized term that many jurisdictions interpret as applying to some semi-automatic firearms. One example is the AR-15 rifle used in several mass shootings.

How Biden’s plan would apply to gun-owners

The campaign told us that it defines high-capacity magazines as those that hold more than 10 rounds of ammunition. However, a spokesperson also said the campaign has not yet ironed out some of the finer details on magazines, such as if owners would be charged per unit.

There’s also a question of how a Biden administration would define "assault weapons" — and whether it would include all semi-automatic firearms, as the post says. A Biden campaign spokesperson told us that the precise definition of "assault weapon" would be worked out during the legislative process. 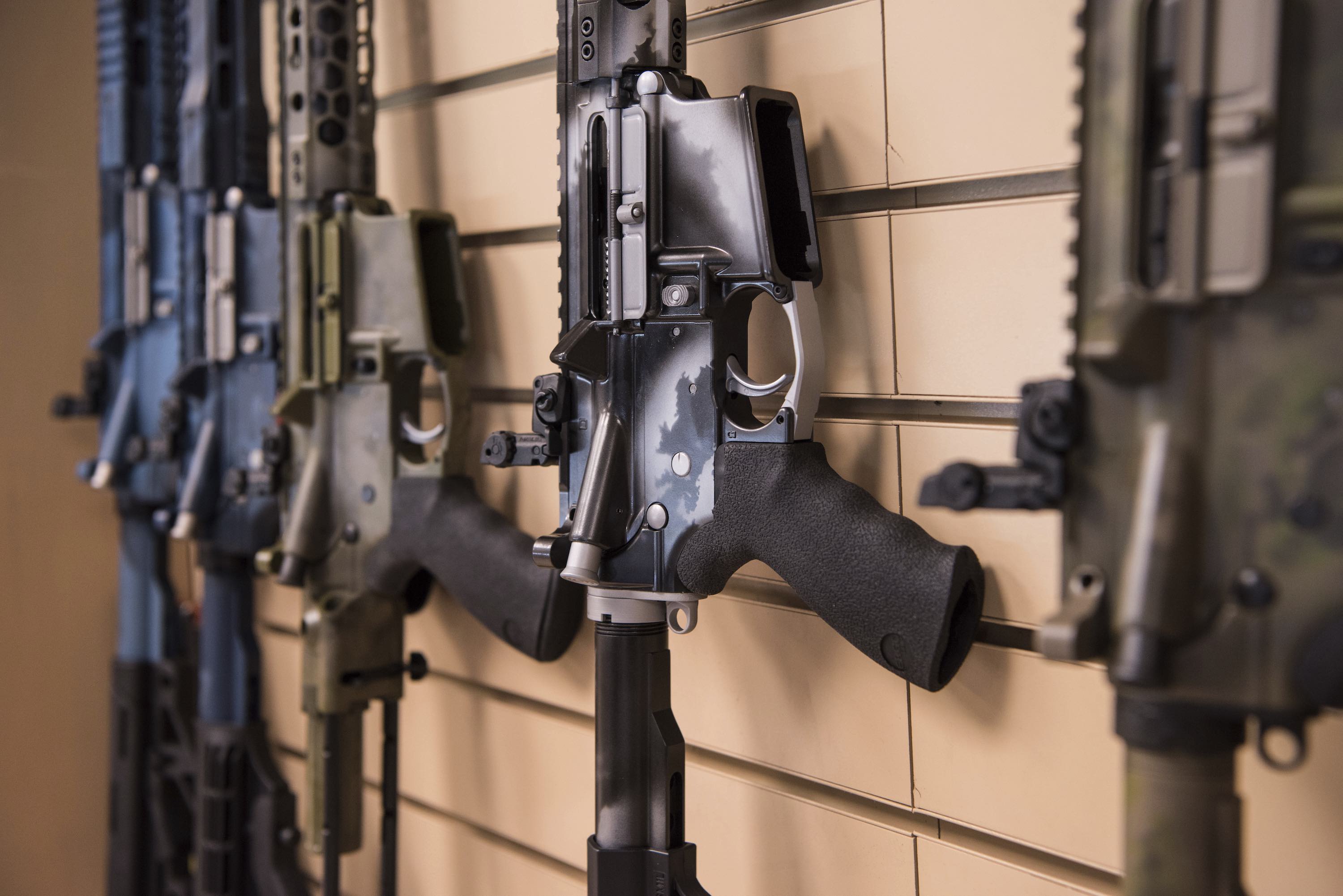 In this photo taken March 15, 2017, AR-15 style rifles made by Battle Rifle Co., a gunmaker in Webster, Texas, are on display in its retail shop. (AP)

It’s also not certain that Biden’s proposal would automatically trigger a $200 tax for people who already own semi-automatic firearms.

The NFA was amended in 1968 to provide a 30-day amnesty period in which unregistered firearms could be registered with the federal government for free. The new law, titled the Gun Control Act, also says ATF can issue new amnesty periods of up to 90 days.

Those kinds of amnesty periods could also apply to Biden’s proposal.

"Actual legislation implementing the proposal could certainly allow for registration without paying the initial tax and instead keep the tax only for manufacturing or transferring registered weapons," said Jake Charles, executive director of the Center for Firearms Law. "The original NFA registration requirement didn’t mandate a fee for then-existing weapons that were required to be registered."

This fact check is available at IFCN’s 2020 US Elections #Chatbot on WhatsApp.

Email from Jake Charles, co-director of the Duke Center for Firearms Law, Oct. 30, 2020

Email from Joseph Blocher, co-director of the Duke Center for Firearms Law, Oct. 30, 2020

U.S. Bureau of Alcohol, Tobacco, Firearms and Explosives, Firearms Guide - Identification of Firearms Within the Purview of the National Firearms Act, accessed Oct. 29, 2020