The state of US contact tracing: Is it working?

The White House’s struggle to get ahead of the coronavirus outbreak within its walls reflects a problem public health officials have felt for months as they’ve tried to help their communities fight the pandemic: The U.S. is not contact tracing as well as it could be.

Contact tracing, the practice of informing people who have been exposed to an infected person, is a key component of the test-trace-isolate strategy to keep case counts low.

There’s no national contact-tracing system in the U.S. The patchwork effort across the country, while scaled up significantly since the start of the pandemic, has seen varied results. But on the whole, the practice has not been as successful as public health experts said they would like.

Problems such as delays with testing and major case surges have impeded this work. But perhaps the biggest issue experts identified is a lack of community buy-in. People need to participate in the process for contact tracing to work.

Addressing those issues will be critical as the winter brings colder weather, forcing people indoors, and states continue to reopen.

"The virus gets a new wind in its sails as we head into the winter, so the biggest test lies ahead," said Andrew Noymer, an associate professor of population health and disease prevention at the University of California, Irvine. "But that second wave can be kept in check for better and for longer the more on point we are in the fall with our contact tracing."

Contact tracers reach out to people who test positive and provide support as needed for them to self-isolate. They ask infected individuals where they have traveled and with whom they have been in close contact — generally defined as within 6 feet for at least 15 minutes — from about two days before they started showing symptoms until they isolated themselves.

Contact tracers then reach out to those close contacts and urge them to quarantine and monitor for symptoms. They do not disclose the name of the infected person when reaching out. 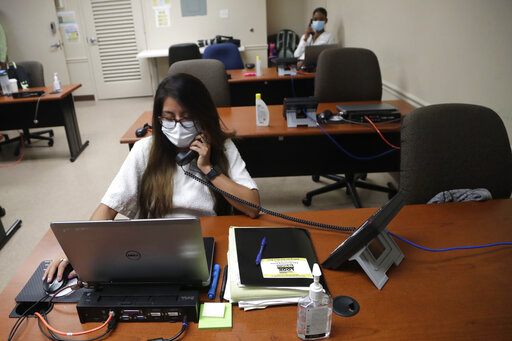 Contact tracer Maria Fernanda works at the Florida Dept. of Health in Miami-Dade County in Doral, Fla on May 13, 2020. (AP)

Contact tracing has to be done quickly, and it requires an army of workers. Jim Blumenstock, the chief program officer for health security at the Association of State and Territorial Health Officials, said there are now "tens of thousands" of contact tracers throughout the U.S.

"It’s a work in progress, but we’re doing well," Blumenstock said. "They really brought this up to a level that didn’t exist before, and now their focus is to continue to mature it."

There’s no national tally of contact tracers, and available estimates are largely based on news reports and states’ data. The latest data from Test and Trace, an organization that grades states on their testing and tracing, counts about 50,000 tracers among all states and Washington, D.C.

The exact number may vary from place to place and month to month. The National Association of County and City Health Officials estimated in April that the pandemic would require 30 contact tracers per 100,000 people, or 98,460 in total across the country.

According to Test and Trace, only six states — New York, North Dakota, Massachusetts, South Dakota, Nebraska and Utah — and Washington, D.C., have hit that per capita benchmark as of Oct. 8. Many places could use more contact tracers, experts said.

"You want to be able to reach everyone who was in contact with someone who just found out they were positive within 24 hours," said George Washington University’s Edward Salsberg, who helped build a tool that localities can use to estimate how many tracers they need.

Some states have turned to technology to aid the process, such as a feature from Google and Apple that uses bluetooth signals to inform people when they’ve come into close contact with an infected person. Apps that rely on the software are now being used or developed in a handful of states, according to news reports.

The apps could help close the gaps left for contact tracers when people can’t remember who they’ve been with or were in public spaces with strangers, experts said. But worries about their sensitivity make them a compliment — not a substitute — to person-to-person outreach.

With no national system in place, contact tracing has been left to the states, experts said, and some have passed the buck along to their municipalities. "It’s very decentralized," said David Hamer, a professor of global health and medicine at Boston University.

Some states and localities have found success, and experts said the practice has worked to keep case counts low in close-knit communities, such as on university campuses, among Native American tribes under the Indian Health Service, and within professional sports leagues.

But the U.S. effort has still been limited compared with other countries that prioritized testing and tracing early on, such as South Korea, which has been tracking residents’ phones.

"I think it’s made a positive contribution but nowhere near as effective as it could be," Salsberg said of the U.S.’s efforts.

Perhaps the biggest problem facing the U.S., experts said, is a lack of responses contact tracers are getting from people they contact. "This is sort of the elephant in the room, that there’s still that issue of trust," Blumenstock said.

For contact tracing to work as designed, the community has to voluntarily participate, which means answering the phone, sharing information, seeking tests and quarantining as needed.

In September, Politico reported on data from 14 states and New York City that showed "more than three-quarters of people interviewed in hard-hit states like California and Louisiana refused to cooperate" with tracers. Only a few states, such as Massachusetts, had high response rates.

A recent study from the Centers for Disease Control and Prevention examining two North Carolina counties in June and July found that "despite aggressive efforts by health departments, many COVID-19 patients do not report contacts, and many contacts cannot be reached."

Some other countries have had better response rates, according to the Atlantic.

"When it’s done by phone, maybe half of the people don’t even want to talk to one who they think is a government representative," said Dr. Anthony Fauci, the nation’s top infectious disease expert, in a June press conference. Fauci said the test-trace-isolate strategy is "very difficult" to pull off when many asymptomatic people don’t know they’re infected.

Another problem is the scale of U.S. outbreaks. When coronavirus case counts exploded in the spring, states couldn’t hire contact tracers fast enough to make a dent, experts said. Many local governments didn’t have enough money.

"In March and April in the Northeast, the volume of cases just way exceeded the volume of contact tracing everybody," Hamer said. "There were just too many infections at that point."

U.S. contact tracers are also limited in their efforts because contact tracing is intertwined with testing, and the country has struggled to return test results in time for tracers to do their jobs.

If tracers are reaching people only after they’ve spread the virus to others, they are "potentially going down the wrong trails," Mina said. He estimated that the U.S. is capturing "fewer than 5% of people who are infected in time to actually act and stop them from transmitting to others."

The White House has done little tracing after its own outbreak

President Donald Trump’s positive COVID-19 diagnosis and the outbreak among those close to him show that the U.S.’s contact-tracing woes have persisted among even some of the most well resourced agencies. As of Oct. 8, the list of positive infections linked to the White House has swelled to include more than two dozen officials, senators, associates and others. 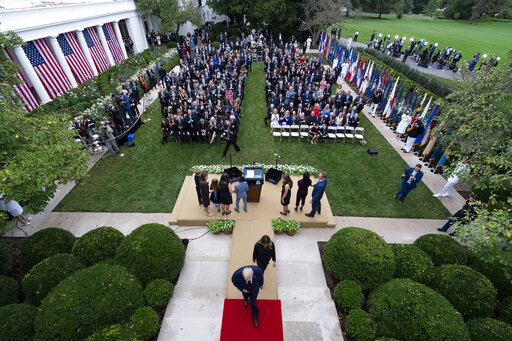 Judge Amy Coney Barrett stands on stage with her family in the Rose Garden after President Donald Trump announced Barrett as his nominee to the Supreme Court on Sept. 26, 2020, in Washington. (AP)

According to news reports, the White House has made little effort to fully investigate the extent and source of its outbreak. The administration rejected the CDC’s offer to help, and the health department in Washington, D.C., has struggled to get through to the White House.

Michael Shear, a White House reporter with the New York Times who tested positive after attending a Rose Garden event with Judge Amy Coney Barrett, Trump’s pick for the open Supreme Court seat, told CNN days later he had not been contacted by the White House.

The Sept. 26 event featured both indoor and outdoor components. Attendees did not practice social distancing, and many were not wearing masks.

"Unlike other countries, our national leadership has not been particularly supportive of the public health initiatives," Salsberg said. "The president apparently hasn’t led the way."

The Associated Press, "D.C. gov't says it's been unable to connect with White House for Covid contact tracing," Oct. 6, 2020

Recode, "Americans are one step closer to a national contact tracing app for Covid-19," Oct. 2, 2020

The New York Times, "New York and New Jersey join a growing list of states with contact-tracing apps residents can use," Oct. 1, 2020

NPR, "Coronavirus Cases Are Surging. The Contact Tracing Workforce Is Not," Aug. 7, 2020

NPR, "As States Reopen, Do They Have The Workforce They Need To Stop Coronavirus Outbreaks?" June 18, 2020

Johns Hopkins University Center for Health Security, "A National Plan to Enable Comprehensive COVID-19 Case Finding and Contact Tracing in the US," April 10, 2020

PolitiFact, "COVID-19 contact tracing for Donald Trump: Who else should isolate?" Oct. 2, 2020

PolitiFact, "Conspiracy theories aside, what contact tracers really do," July 16, 2020

Phone interview with Andrew Noymer, associate professor of population health and disease prevention at the University of California, Irvine, Oct. 5, 2020