President Joe Biden speaks in the Rose Garden of the White House in Washington on April 11, 2022. (AP)

Former President Barack Obama returned to the White House for the first time since 2017, joining President Joe Biden for an April 5 event to celebrate the Affordable Care Act.

The event, at which Biden signed a new executive order to expand coverage under the Obama-era health care law, lasted roughly 45 minutes. But in the hours that followed, the Republican National Committee circulated two short, out-of-context clips from the event. One was trimmed down to 13 seconds.

Both clips quickly went viral, buoyed by conservative influencers. Eventually, they made their way onto Fox News’ website and the primetime programs led by hosts Tucker Carlson and Laura Ingraham. "Biden looks on as Democrats gush over Obama at White House event," read the headline on one of several online stories Fox News ran based on the clips.

The two clips, stripped from their context, were misleading. One was framed as showing Biden lost and confused while people swarmed Obama. Biden was actually stepping away from the group to find someone. "Literally no one wants to talk to Joe Biden," the RNC wrote.

The other clip, shared by the RNC in a tweet that said "this is so sad," appeared to show Biden struggling to get Obama’s attention. The clip ended right before Biden caught a hold of Obama and introduced him to someone, leaving the misleading impression that Biden was ignored.

"That’s the president of the United States, in his own house, shunned. Nobody would talk to him," Carlson said.

The misleading RNC tweets and Fox News segments builds on a years-long campaign by former President Donald Trump and his allies to paint 79-year-old Biden, who grew up stuttering, as old, weak, bumbling, and senile.

Dating back to the campaign trail, Trump’s team and supporters have repeatedly chopped down footage from Biden’s speeches, taking his words out of context and distorting their meaning with deceptively edited videos that experts who study misinformation call "cheap fakes."

But as with the clips they pulled from Biden’s White House event with Obama, they have also used strategic video editing to manufacture supposedly humiliating moments for Biden.

The trend capitalizes on a history of comedic and embarrassing presidential moments that garnered public attention — and on the public’s struggles to differentiate between footage of something that really happened and videos that are designed to create a particular impression.

"Certainly going all the way back to George Washington, the president’s opponents have kept an eye out for damaging and embarrassing material," said Jeffrey Engel, a professor of history and the founding director of the Center for Presidential History at Southern Methodist University.

Efforts to portray presidents as ineffective or seize on moments that make them look that way are not new. Andrew Jackson was regularly "lambasted in the press for what would effectively be using the wrong fork at dinner," Engel said, regardless of whether the rumors were true.

In the age of video, the 24-hour news cycle and the internet, it's become more common for presidents to be captured in moments that make them look weak, silly or disoriented. 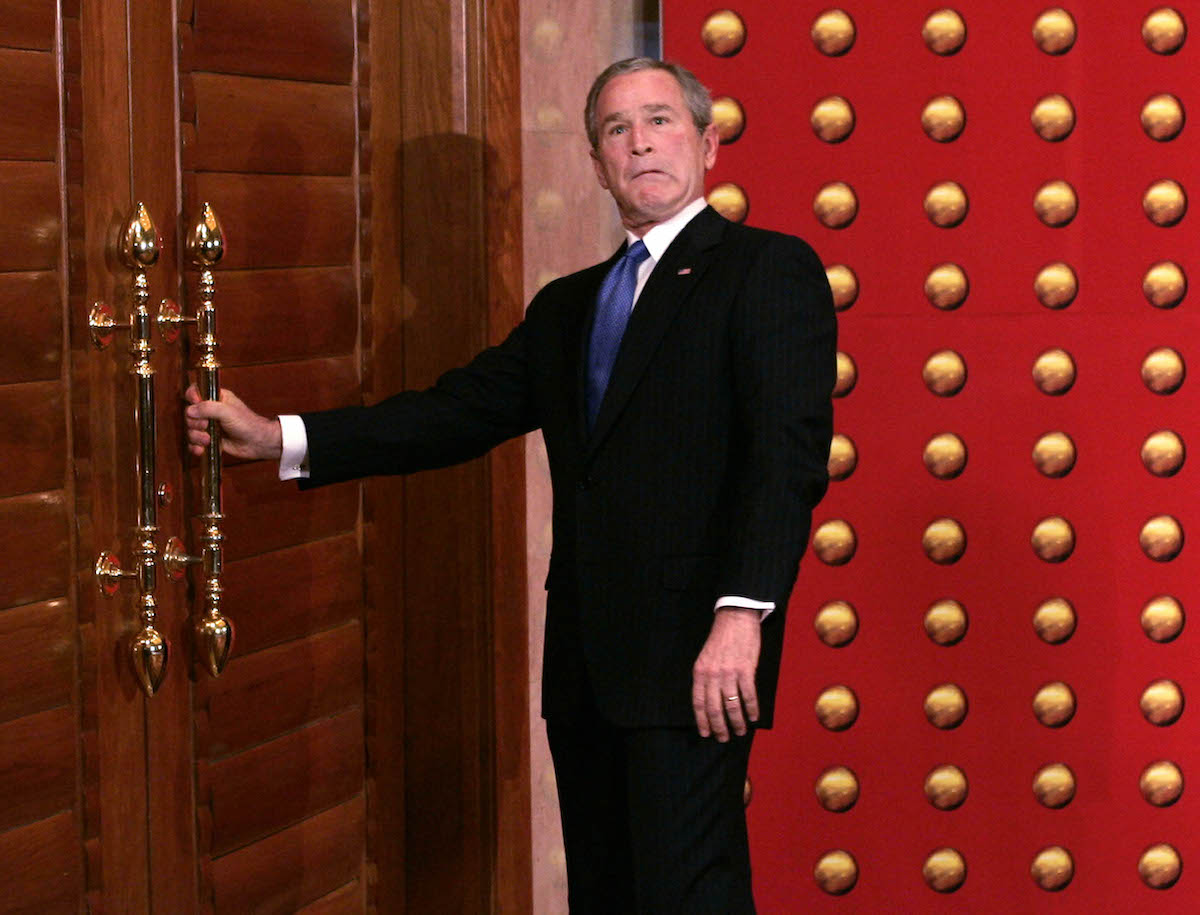 President George W. Bush jokingly makes a face as he tries to open a locked door after a press briefing in Beijing on Nov. 20, 2005. (AP)

"For the last several decades — even the last half-century — we’ve had a highly scripted political culture, in which presidents and other politicians put great thought into every word and image," added David Greenberg, a Rutgers University professor of history and journalism and media studies. "Anything that deviates from script promises to offer a glimpse of the ‘authentic.’"

These real, unscripted moments have often been counted among critics and late-night hosts as embarrassments, such as when Trump stared into a solar eclipse or slow-walked down a ramp, or when Biden stumbled on his way up the stairs of Air Force One. 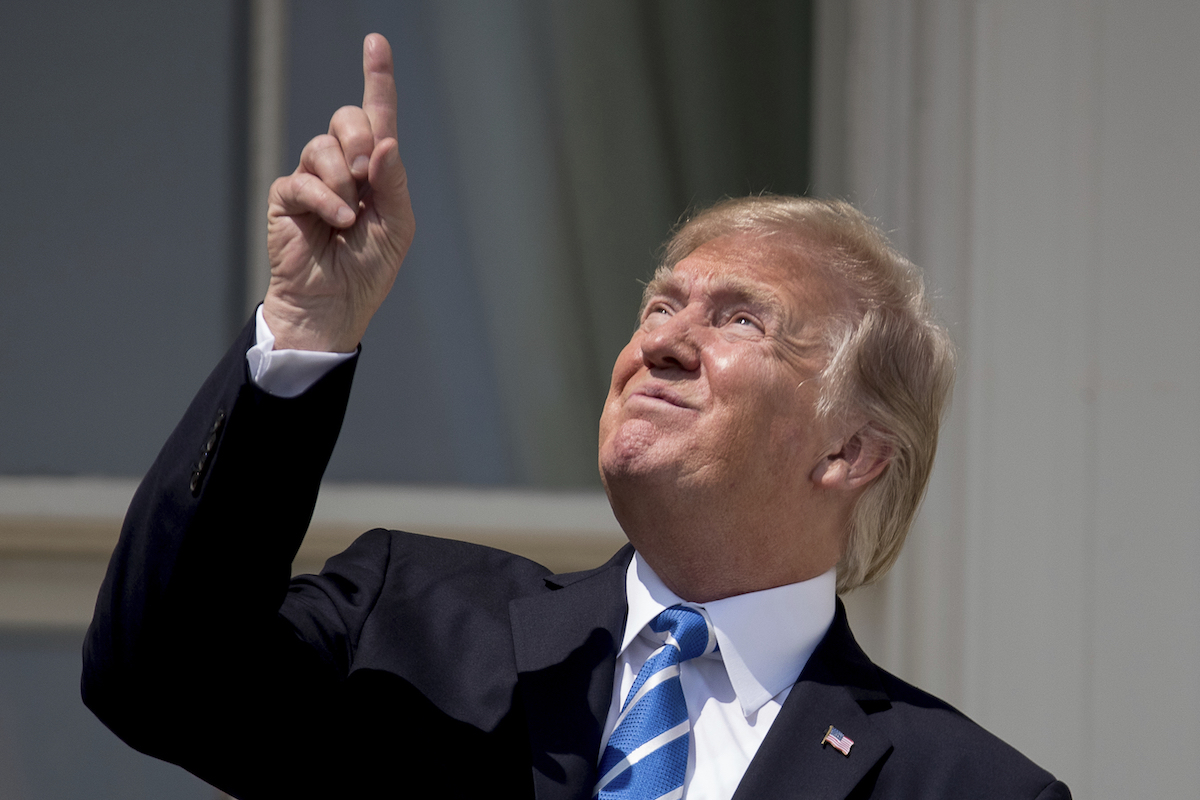 President Donald Trump points to the sun as he views the solar eclipse at the White House in Washington on Aug. 21, 2017. (AP)

At the Democratic National Convention in 1980, Jimmy Carter introduced Hubert Humphrey to the stage as "Hubert Horatio Hornblower." George H.W. Bush fainted and threw up on the prime minister of Japan in 1992. His son George W. Bush, who became so known for verbal slip-ups that they were coined as "Bushisms," once got stuck behind a locked door after a 2005 press briefing in Beijing. And the Fox News lineup frequently ridiculed Obama as weak and unpresidential after he was captured biking in a helmet, or wearing a tan suit, or using a selfie stick. 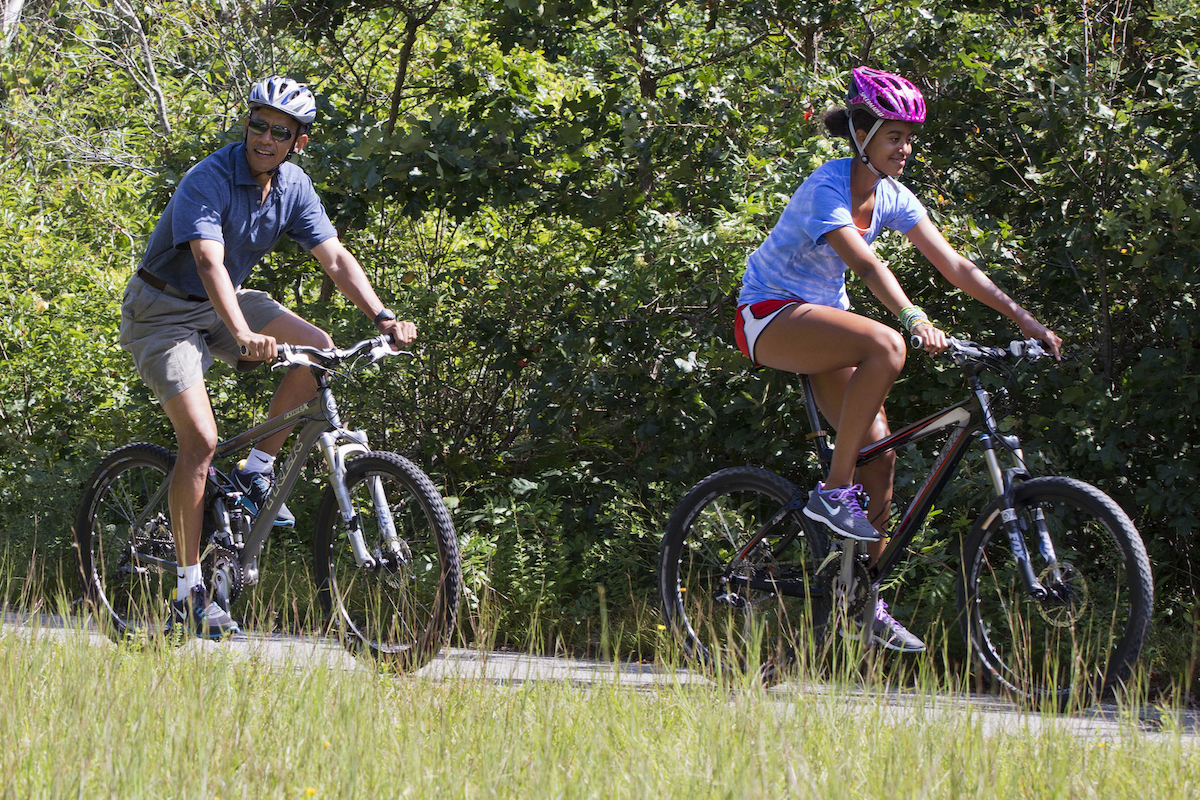 Other moments have proven to be complete fabrications. After a 1963 speech in Berlin, a false rumor spread claiming that John F. Kennedy, speaking in German, had accidentally referred to himself as a jelly donut. Kennedy never said that, just as Trump never held a Bible upside down, despite a flurry of false claims alleging that he did.

But in the internet era, there’s a new in-between.

With basic software allowing amateurs to alter photos and slice up videos, and with social media making that content easier to disseminate, an increasing share of the supposedly embarrassing presidential moments going viral online are neither fully authentic nor totally faked.

Instead, they are real photos and videos that have been edited in misleading ways — ways that, in an increasingly polarized country, will usually find a receptive audience, experts said.

"The thing that really gets stripped out of all of this is context," said Mike Caulfield, a research scientist and affiliate instructor at the University of Washington’s Center for an Informed Public. "Even though this stuff is propagated through some of these cable news networks, a lot of it comes from this sort of participatory culture of the web or Twitter and various other platforms, where people sort of compete to come up with the decontextualized video of the day."

In 2002, for example, the younger Bush visited a school in Houston. He read a children’s book written by Lynne Cheney, Vice President Dick Cheney’s wife. Not long after, an image circulated online that appeared to show Bush reading the book upside down. But the image was doctored.

Similarly viral videos have been edited to make it look like Biden was falling asleep or lost on stage during events. "If he was a Republican the 25th Amendment would be trending and rightfully so," Donald Trump Jr. tweeted in one such post days before Biden’s inauguration.

Claire Wardle, director of First Draft, a nonprofit that combats misinformation, said these examples are increasingly made possible by growing polarization in the age of social media: "It's easier than ever for partisans to take examples and push them in their own social media feeds."

When Trump was the president, he saw the same types of attacks. One Biden campaign ad cut a clip to give the impression that Trump had been snubbed of a handshake by the first lady of Poland, when the full clip showed her shaking Trump’s hand moments later.

Another viral video was cut to just 12 seconds and presented out of context so that it appeared to show Trump wandering aimlessly, "lost and disoriented," on the White House lawn. In context and unedited, the full video shows Trump walking away from reporters near Marine One so that he could wait for Melania Trump and board the helicopter with her. 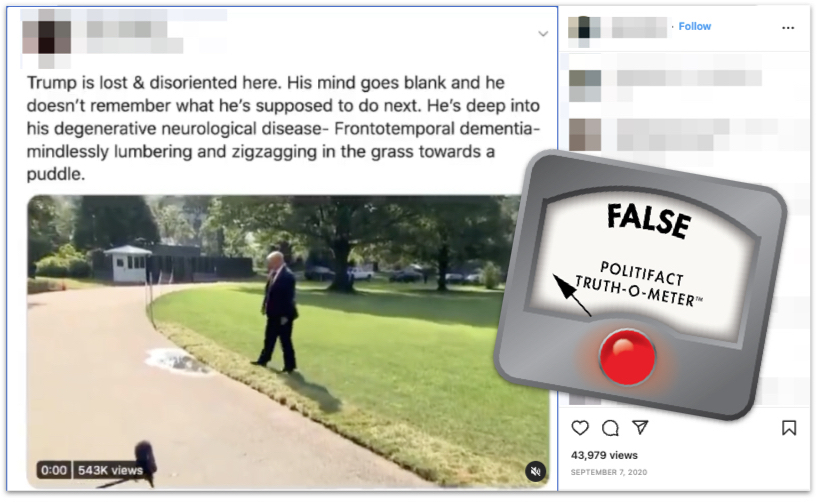 Social media posts in 2019 took video of President Donald Trump on the White House lawn out of context.

Caulfield said some people may be especially susceptible to edited videos targeting presidents in this way because they feel they can properly assess when someone looks confused, disoriented, weak or stupid.

"A clip like that is sort of immediately understandable to a very broad range of people. You don't actually need to have a knowledge of foreign policy on Ukraine or what public spending does to inflation," Caulfield said. "When we look at something that seems like one of these human moments, we're like, ‘I don't need to know anything. I can see it right there.’ It does breed, I think, a false sense of confidence in us."

Caulfield, who developed a four-step method for separating fact from fiction online, said he recommends taking stock of how compelling a shortened clip of the president appears on the first watch, and then seeing if it’s equally as compelling in its complete context.

"It’s the difference between those two that is the level of deception," Caulfield said. "And that's what we ask people to pay attention to."

PolitiFact, "In context: The Medal of Freedom clip that went viral on Twitter," Dec. 8, 2020

Phone interview with Mike Caulfield, research scientist and affiliate instructor at the University of Washington’s Center for an Informed Public, April 8, 2022

Phone interview with Jeffrey Engel, professor of history and founding director of the Center for Presidential History at Southern Methodist University, April 8, 2022