Former Senate Sergeant-at-Arms Michael Stenger escorts former Vice President Mike Pence to the House chamber as lawmakers return to complete the certification of electors in the 2020 presidential election in Washington after midnight on Jan. 7, 2021. (AP)

Michael Stenger, the Senate sergeant-at-arms at the time of the Jan. 6, 2021, attack at the U.S. Capitol, died June 27, according to reports from Politico and other outlets. He was 71.

Stenger had served as the Senate sergeant-at-arms since 2018. He resigned shortly after the insurrection along with other officials tasked with securing the Capitol.

Amid the information vacuum, social media users ginned up their own explanations for his death. A surprise House hearing into the Jan. 6 attack also fanned the flames of speculation.

Across Twitter and other internet platforms, the news of Stenger’s death fueled unsubstantiated rumors and conspiracy theories about the Jan. 6 attack, how he died, and Hillary Clinton.

A flurry of posts, including from former White House chief strategist Steve Bannon and Rep. Marjorie Taylor Greene, R-Ga., suggested that the timing of Stenger’s death was suspicious.

On Twitter, Greene shared a video of Stenger testifying to Congress in February 2021 that future Jan. 6 investigations should consider probing the possible "funding and travel of what appears to be professional agitators." Greene has previously promoted debunked claims about left-wing antifa activists or FBI agents infiltrating the Jan. 6 crowd and provoking the violence.

"‘Dies suddenly’ before testifying is suspicious," said one post calling Stenger’s death a "murder" on Truth Social, Trump’s social media app. "The January 6th panel is desperate to cover up the Democrat/FBI/Antifa orchestrated event to disrupt the objections to the 2020 election fraud."

The Gateway Pundit article speculated that Stenger’s comment about possible "professional agitators" was a reference to Ray Epps, a man right-wing politicians and pundits have falsely held up as an FBI informant who instigated a "false flag" attack on Jan. 6.

The article linked to a post on the Telegram messaging app from a promoter of the baseless QAnon conspiracy theory.

"Stenger testified that there was paid professional agitators at January 6th," the anonymous QAnon influencer wrote in the post, which received hundreds of thousands of views. "Is that what they didn't want out? I smell desperation."

Facebook posts sharing the Gateway Pundit article were flagged alongside several other posts about Stenger’s death as part of Facebook’s efforts to combat false news and misinformation on its News Feed. (Read more about our partnership with Facebook.)

"I believe in coincidences. Coincidences happen everyday. But I do not trust coincidences," said another widespread post shared June 28.

Despite the revived social media speculation, there remains no evidence that the Jan. 6 attack was a "false flag" event orchestrated by antifa or the FBI. The most serious charges lodged to date targeted the far-right Proud Boys and Oath Keepers militia groups for seditious conspiracy.

The New York Post reported that a woman who answered the phone at Stenger’s home said his death had "nothing to do with Jan. 6 at all."

Baseless claims say Stenger was ‘shot and killed,’ Clinton did it

Other social media users misreported Stenger’s cause of death, falsely claiming he was "shot and killed" while crossing the street near an apartment where he supposedly lived.

"I just found this #Stenger arrived in a friend's car and was dropped off across the street," said one June 27 tweet responding to the news of his death, the first post PolitiFact found making this claim. "As Stenger crossed the street toward his apartment, he was shot and killed. The shooting was partially captured on surveillance video from cameras on a nearby building." 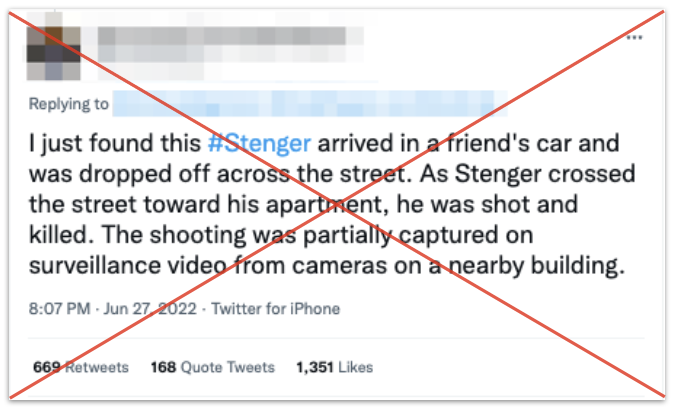 Several social media posts accused Hillary Clinton of arranging for Stenger to be murdered, playing off the decades-old conspiracy theory that Clinton and her husband, former President Bill Clinton, have an extensive "body count" of people they have had assassinated.

"The life expectancy of people who know details about Nancy Pelosi's actions on Jan 6 is tragically short … maybe she's been getting tips from Killary?" said one viral Telegram post.

"Welp, Killary strikes again," said another post on Truth Social that repeated the inaccurate claim that Stenger was "shot to death outside his apartment."

"The Senate sergeant at arms during Jan. 6, Michael Stenger, was found shot dead outside his apartment," said another post on Facebook. "Sounds a little … Clintonian … to me."

But there’s no evidence the Clintons were involved in Stenger’s death, and the original tweet claiming that Stenger was "shot and killed" lifted language almost verbatim from an unrelated court document detailing the death of a different Michael Stenger in 2013. That Michael Stenger was fatally shot in a drive-by shooting, local news reported at the time.

PolitiFact, "No, the Clintons aren’t responsible for more deaths than the coronavirus," March 16, 2020