Virginia Thomas, a conservative activist and the wife of Supreme Court Justice Clarence Thomas, made a series of false and conspiratorial claims shortly after the 2020 election in text messages to Mark Meadows, former President Donald Trump’s chief of staff, imploring him to press forward in an effort to overturn the election.

The Washington Post and CBS News first obtained copies of the text messages written by Thomas, who goes by Ginni, and reported on their contents March 24 after confirming them with five unnamed people who had seen them. Major media outlets have since corroborated the texts; CNN said it reviewed the messages, and the New York Times, NBC News and ABC News confirmed their authenticity through other unnamed sources.

The Jan. 6 House committee has not released the texts. Meadows’ attorney, George Terwilliger III, confirmed the existence of the messages to the Washington Post. While PolitiFact has not seen the texts or heard back from Thomas or Terwilliger, we do not doubt that the messages are authentic.

The 29 messages between Thomas and Meadows were among more than 2,000 texts Meadows turned over to the committee as part of its fact-finding mission regarding the Jan. 6, 2021, Capitol attack. What stood out to us were several messages from Thomas that repeated code language for conspiracy theories as she urged Meadows to reject the election results.

Thomas has been affiliated with several conservative groups, including the Council for National Policy, which sought to keep Trump in power. She told the Washington Free Beacon in March that she attended the Jan. 6 rally that Trump held shortly before the attack on the Capitol, but that she left early.

The messages highlighted in early news reports show Thomas rehashing false claims from Trump and his allies that the election was stolen or rigged. They also echoed QAnon, the sprawling and baseless conspiracy theory centered around the belief that a secret cabal of Satan-worshipping pedophiles, including many top Democrats and celebrities, is operating a global sex-trafficking ring that Trump was recruited to take down. The messages included references to "watermarked ballots," "white hats," Guantanamo Bay tribunals and other staples of QAnon lore.

Here’s our fact-checking guide to the texts.

"Watermarked ballots in over 12 states have been part of a huge Trump & military white hat sting operation in 12 key battleground states."

Thomas sent Meadows a link to a YouTube video on Nov. 5, 2020, called, "TRUMP STING w CIA Director Steve Pieczenik, The Biggest Election Story in History, QFS-BLOCKCHAIN." The video is no longer on YouTube.

Pieczenik, a former State Department official, is a far-right commentator who has appeared often on Alex Jones’ InfoWars channel, and who has joined Jones in referring to the Sandy Hook Elementary School shooting in Newtown, Conn., as a "false flag."

In the world of conspiracy theories, QFS stands for "Quantum Financial System."

The imaginary QFS financial system is rooted in older conspiracy theories that said a sweeping 1980s proposal to reform the U.S. economy was secretly passed into law and kept under wraps by the government, but would one day come into effect, wrote researcher Mike Rothschild in his book about QAnon.

"The gist is that at some point, all currencies will be ‘revalued’ to have the same exchange rate (possibly pegged to gold or the dollar), taxes and debt will be wiped away, and anyone holding vast amounts of low-value currency like the Iraqi dinar or the Vietnamese dong will instantly be wealthy," Rothschild told PolitiFact in an email. "It's absolute nonsense."

PolitiFact found versions of what appear to be the same video on Rumble and Bitchute.

In it, Pieczenik used the term QFS to describe "a sting operation" initiated by Trump in which every ballot was "watermarked" with a "QFS blockchain" encryption code and National Guard soldiers were deployed to 12 different states. Snopes rated the video’s claims False.

PolitiFact debunked a viral Facebook post that was highlighted in the video, rating the posts’s claim about "watermarked" ballots Pants on Fire. There was no evidence of such an elaborate plot to catch any alleged cheating by Democrats. The federal government does not print or issue ballots.

The watermarked ballots claim was popular among QAnon adherents, with "watch the water" becoming a go-to refrain on QAnon message boards. "White hats" is also used in QAnon lingo to refer to those in the military and government who were allied with their cause. 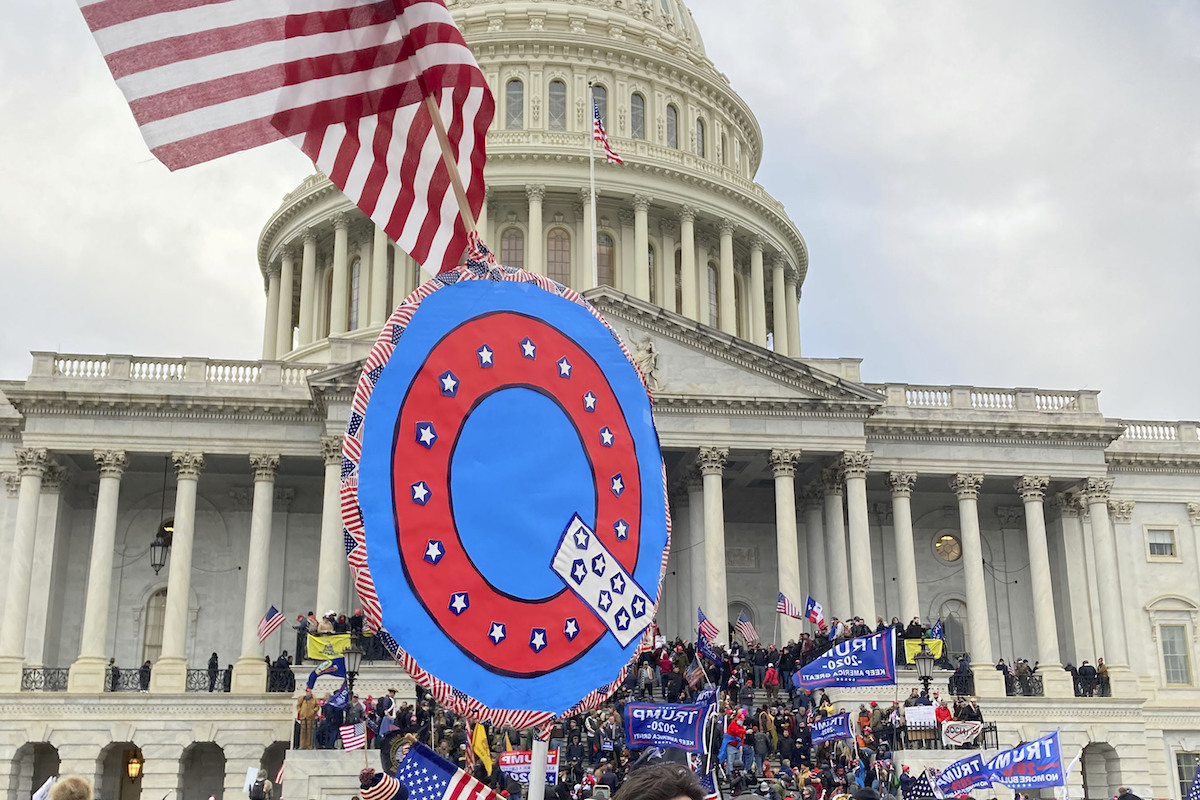 A man held a sign related to the QAnon conspiracy theory outside the U.S. Capitol on Jan. 6, 2021.

Thomas’ claim that public figures in politics, government, tech and the media were being rounded up and shipped to Guantanamo Bay for military tribunals "is the essence of QAnon," Rothschild said. Vice reported that Thomas’ text "directly quoted a passage floating around on QAnon message boards."

Many of the earliest posts from "Q," the anonymous poster who claimed to be a military insider and whose writings on fringe internet forums inspired the movement, talked of expanding Gitmo and referenced mass arrests of Democrats, celebrities and banking elites, Rothschild said.

Many adherents of QAnon have long believed that Trump’s efforts would culminate in a mass unsealing of indictments called "the storm."

"Q" has not posted a message since December 2020, but baseless internet rumors describing military arrests and Guantanamo Bay executions of top Democrats have lived on courtesy of influencers and websites that push the QAnon theories, such as Real Raw News.

"The majority knows Biden and the Left is attempting the greatest Heist of our History."

This is false; there was no "heist."

Biden won the presidency by amassing the necessary Electoral College votes through flipping battleground states that went for Trump in 2016.

A scheme to steal the election for Biden would have required election workers in thousands of cities and counties to coordinate a massive fraud, risking felony charges and prison time. By the date of Thomas’ text, Nov. 10, 2020, judges in multiple states had rejected lawsuits filed on Trump’s behalf that challenged vote counting procedures.

"Sounds like Sidney and her team are getting inundated with evidence of fraud. Make a plan. Release the Kraken and save us from the left taking America down."

Thomas was referring to lawyer Sidney Powell, who falsely claimed Trump won the election in a landslide and regularly shared content related to QAnon, in this Nov. 19, 2020, text.

Powell was part of the unsuccessful effort to file lawsuits in battleground states that Trump lost. In a series of discredited allegations that later triggered expensive defamation lawsuits, she also accused voting technology companies of changing election results.

The phrase "release the Kraken" comes from the 1981 movie "Clash of the Titans," but Powell and others adopted the phrase after the 2020 election to refer to the false allegations of election fraud that she claimed would invalidate Biden’s election.

In a 2021 court filing defending her against one of the defamation lawsuits, Powell’s attorneys wrote that "no reasonable person" would conclude that her claims were statements of fact.

RELATED: What is QAnon, the baseless conspiracy spilling into US politics?

Mike Rothschild, "The Storm Is Upon Us: How QAnon Became A Movement, Cult, and Conspiracy Theory of Everything," accessed March 25, 2022

VICE, "Ginni Thomas Is a Total QAnon Fangirl, She Revealed in Texts to Mark Meadows," March 25, 2022

PolitiFact, "No proof for pro-Trump conspiracy theory of secret watermarks on Ariz. ballots," May 4, 2021

Email interview with Mike Rothschild, author of "The Storm Is Upon Us: How QAnon Became A Movement, Cult, and Conspiracy Theory of Everything," March 25, 2022