The July 11 meeting at The White House featured pro-Trump meme creators, such as Carpe Donktum, and conservative organizations like the Heritage Foundation. Neither Facebook nor Twitter were invited, although the president announced a separate meeting with the platforms in the coming weeks.

We wondered if Trump’s claim about his Twitter followers, which number around 62 million — a growth of about 40 million from his inauguration day — had some merit. So we looked into it.

PolitiFact reached out to both the White House and Trump’s 2020 reelection campaign for evidence to back up the president’s comments at the social media summit. The campaign did not provide a comment and we haven’t heard back from the White House. We’ll update this story if we do.

In a literal sense, Trump hasn’t been "blocked," in his words, or otherwise banned on Twitter.

When we searched the word "Trump" on both Twitter and Google, the president’s profile was the first to appear. We were able to unfollow and refollow him with two clicks of a button. 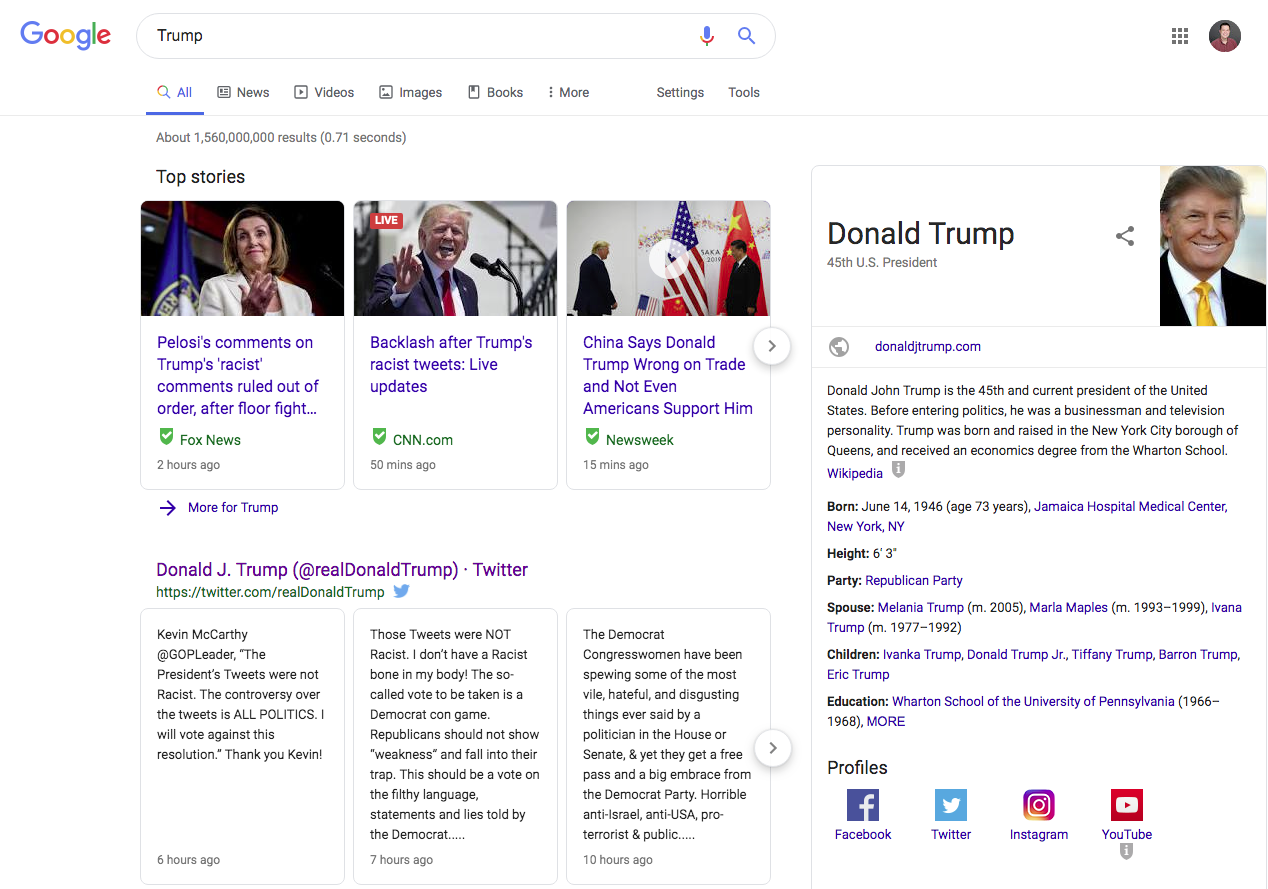 We couldn’t find any news coverage or statements from Twitter saying that Trump had been blocked or otherwise restricted on the platform, and Twitter did not provide a comment for this story. Fact-checkers at CNN debunked the president’s claim, saying there’s "no evidence that Twitter or other social media companies have made it difficult for people to follow Trump."

Before he made the claim about being blocked on Twitter, Trump talked about how the growth of his followers had seemed to stagnate in recent months.

"It’s so different than it was even six, seven months ago. I was picking up unbelievable amounts of people," he said. "A number of months ago, I was at a certain number — many millions. And then all of a sudden, I was down over a million."

There is an explanation for this: Trump has lost followers over the past year due to Twitter’s purge of fake accounts. The New York Times reported in July 2018 that Trump lost a little more than 300,000 followers in one purge, while former President Barack Obama lost more than 2 million.

That same month, PolitiFact wrote about Twitter allegedly "shadow banning," or decreasing the reach of, conservative politicians in favor of Democratic ones. We found that those claims were based on a software error on the platform that made it harder to find certain handles through search, which the company said it fixed.

In October, Trump criticized Twitter’s decision to remove fake accounts and for allegedly doing something "that makes it much harder to join." The company defended its policies, saying that "many prominent accounts have seen follower counts drop, but the result is higher confidence that the followers they have are real, engaged people."

Conservatives have long accused companies like Google and Facebook of burying or censoring their content. Twitter CEO Jack Dorsey told CNN last year that his employees’ bias "is more left-leaning." But as The Guardian pointed out in December, accusations of systemic bias stem from the fact that tech companies typically keep their content moderation strategies under wraps.

Further, some conservative-leaning publishers have found success on social media. A recent analysis from Newswhip, a social media analytics firm, found that Fox News and The Daily Wire were among the publishers with the most engagement on Facebook in June 2019. Many public figures on the right, from politicians like Trump and commentators like Ben Shapiro, enjoy large followings on platforms like Twitter and Instagram.

Trump claimed that people have "been blocked" from following him on Twitter.

We were able to search for, find and follow the president’s profile in a matter of seconds. The White House did not provide any evidence for his claim. We found no evidence that suggested Twitter made it harder to follow him. A recent purge of fake accounts reduced Trump’s Twitter followers, but it also reduced those of former President Barack Obama.

Trump’s claim is not accurate. We rate it False.

Fortune, "Trump Is Holding a Social Media Summit Today. Here’s Who Will Attend—And Who Won’t," July 11, 2019