Facebook posts
stated on October 7, 2019 in a Facebook post:
Says the sons of Nancy Pelosi, Mitt Romney and John Kerry are all on the boards of "energy companies doing business in Ukraine."

Hunter Biden isn’t the only politician's child who’s been scrutinized in the past few weeks for his work overseas.

On Facebook, several widely shared posts claim the sons of House Speaker Nancy Pelosi, D-Calif., and Mitt Romney, R-Utah, are also on the boards of energy companies linked to Ukraine. Other posts add former Secretary of State John Kerry to the mix.

"Biden’s son, Pelosi’s son, Romney’s son (are) all on the board of director (sic) for energy companies doing business in Ukraine," one post reads.

The posts were flagged as part of Facebook’s efforts to combat false news and misinformation on its News Feed. (Read more about our partnership with Facebook.) And they’ve collectively reached thousands of users, so we wanted to check them out.

The source material of the posts appears to be a viral tweet published Oct. 6 by Jack Murphy, co-founder of conservative news site TrendingPolitics.com.

"Biden's son, Pelosi's son, Romney's son, Kerry’s son," he tweeted. "All are on the board of directors for energy companies doing business in Ukraine… Coincidence? No." 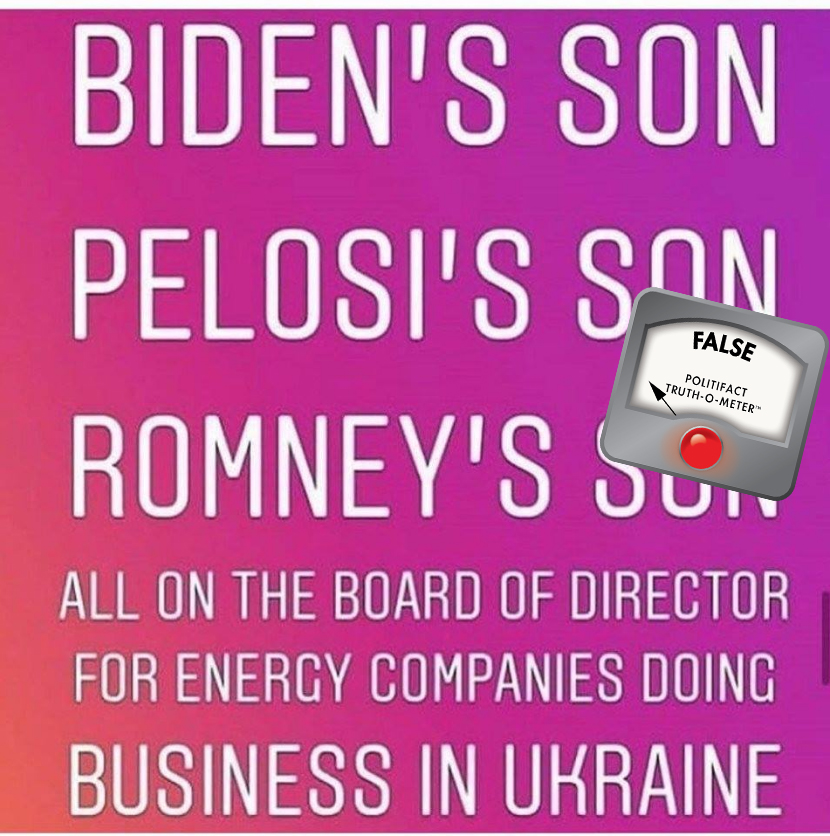 We reached out to Murphy for the source of his post, but we haven’t heard back. Several conservative publications had reported on the allegations about Pelosi’s son, Paul, days before Murphy made that assertion.

We looked into the business dealings of Pelosi, Romney and Kerry’s sons.

Claims about Pelosi’s son are misleading

Paul Pelosi Jr. once served on the board of an American energy company, Viscoil, that dissolved and re-formed in Singapore under a different name. But Paul Pelosi had no part in the new entity, and it’s unclear to what extent the company has done business in Ukraine.

Reports of the connection appeared in One America News Network and other conservative outlets, the source of which appears to be an Oct. 3 tweet from Patrick Howley, a writer for The Epoch Times. The pro-Donald Trump website has been known to publish conspiratorial content.

"BOOM: Nancy Pelosi's son Paul Pelosi Jr. (who went to Ukraine in 2017) was a board member of Viscoil and executive at its related company NRGLab, which DID ENERGY Business in UKRAINE!" Howley said in the tweet, which has been retweeted more than 12,000 times. "And Nancy Pelosi appeared in a promotional video for the company!"

To sum it up: Paul Pelosi served on the board of Viscoil. At one point, a Ukrainian singer is alleged to have promoted the company. But Pelosi was off the board before that happened. That’s the connection people have identified.

Drew Hammill, a spokesman for Nancy Pelosi, told PolitiFact that Paul Pelosi worked for Viscoil for a short time. He denied that it had any dealings in Ukraine at the time.

"The company was based in Southern California and focused solely on U.S. business," he said in an email. "The company later reorganized under a different name, but Paul Pelosi Jr. played no role in the new entity."

What we know about the other lawmakers’ sons

Hunter Biden did serve as a board member for a Ukrainian energy company, from 2014 until the spring of 2019. As for the sons of Kerry and Romney, there is no evidence to suggest that they ever held similar positions.

Burisma Holdings appointed Hunter Biden to its board of directors in 2014 to help the energy company improve its corporate governance and adopt Western-style transparency. His father, the former vice president and Democratic candidate running for president in 2020, has faced criticism for the appointment over a conflict of interest.

Kerry has three stepsons from his marriage with Teresa Heinz, heiress to the H.J. Heinz ketchup fortune: John IV, André and Chris. John is an educator, while André is an environmentalist.

Chris is a businessman with extensive experience in private equity and venture capital — including pursuing a string of investment and consulting firms with Hunter Biden and Devon Archer, another businessman who was Chris Heinz’s roommate at Yale University. He co-founded Rosemont Seneca Partners, a Washington investment fund, in 2009 with Biden and Archer.

Biden and Archer would later serve on the board of Burisma, but Chris Heinz never did. In fact, he advised Archer against joining the board and, when both he and Hunter didn’t heed the warning, Heinz ended his business relationships with them.

"Chris has never been on the board of any energy company; nor has he ever traveled to or worked in Ukraine," a spokesman for John Kerry told PolitiFact in an email.

All the Heinz children are board members of the Heinz Endowments, the philanthropic arm of their family’s estate, but we could find no evidence that any have served on the board of an energy company linked to Ukraine.

Romney has five sons who work in a variety of different fields: Tagg, Matt, Craig, Josh and Ben. We could find no evidence that any of them have served on the board of an energy company with ties to Ukraine.

We reached out to a spokeswoman for Romney for more details about his sons’ business dealings, but she declined to comment on the substance of the Facebook posts.

Several Facebook posts claimed that the sons of Biden, Pelosi, Romney and Kerry are on the boards of "energy companies doing business in Ukraine."

Beyond Hunter Biden’s already well-known tenure as a board member for Ukrainian energy company Burisma (which ended in spring 2019), this claim is inaccurate and represents a false attack against those who have spoken out against Trump.

Pelosi’s son, Paul, briefly served on the board of an American energy company before it dissolved in 2010, but there’s no evidence the company had dealings with Ukraine while he held that seat. Kerry stepson, Chris, has worked with Hunter and another former Burisma board member in the past, but he severed ties after they joined the energy company in 2014. There is no evidence that any of Romney’s sons have served on the board of any energy companies with ties to Ukraine.

Email interview with a spokesman for John Kerry, Oct. 9, 2019

The Heinz Foundations’ Board and Staff, accessed Oct. 9, 2019

Legal Insurrection, "Nancy Pelosi may have her own Ukraine problem," Oct. 5, 2019

NBC News, "Trump, QAnon and an impending judgment day: Behind the Facebook-fueled rise of The Epoch Times," Aug. 20, 2019

The New York Times, "A Romney Travels to Russia, but on Strictly Friendly Terms," Nov. 1, 2012

The Washington Post, "The gas tycoon and the vice president’s son: The story of Hunter Biden’s foray into Ukraine," Sept. 28, 2019