President Donald Trump talks with reporters after receiving a briefing on Hurricane Dorian in the Oval Office of the White House, Sept. 4, 2019, in Washington. (AP)

The post, published Sept. 1, claims to show a screenshot of a tweet from Trump. In it, Trump credits Dorian’s northward path away from the Florida coast on the state’s Republican Gov. Ron DeSantis, saying that, if Democrat Andrew Gillum had won the midterm election, "millions would have died."

But the tweet is a fake. The post was flagged as part of Facebook’s efforts to combat false news and misinformation on its News Feed. (Read more about our partnership with Facebook.)

On first glance, the account in the screenshot appears to belong to the president. It bears the same photo as his real account, @realDonaldTrump, and even the handle looks similar. 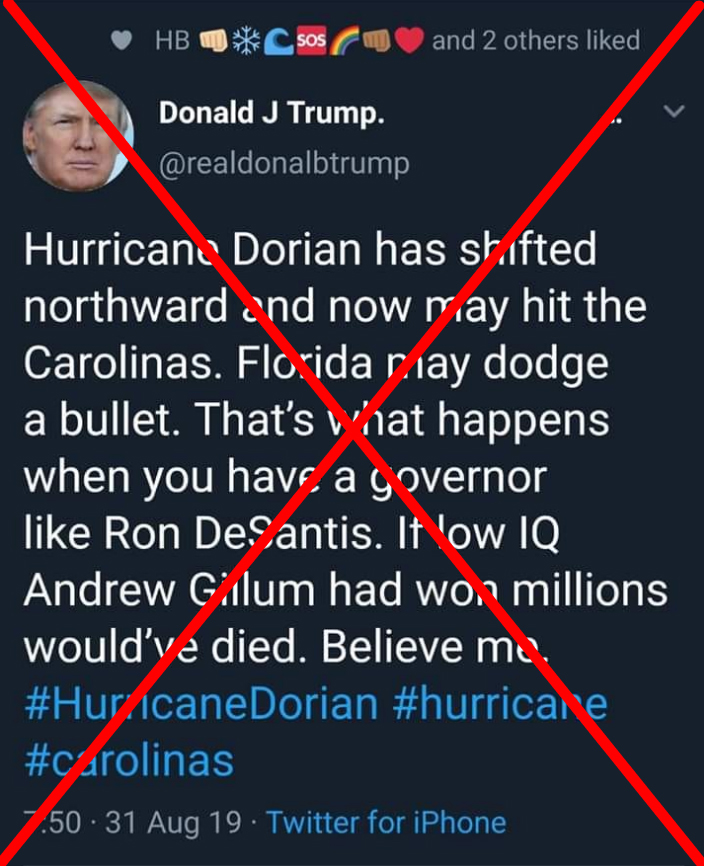 But it’s not. The suspect tweet bears the handle @realdonalbtrump — with a "b" where the "d" should be. It also has a misplaced period at the end of Trump’s name and does not have a blue verification badge, which means the account doesn’t actually belong to the president.

"NOT the real Donald Trump, just PARODY," the bio reads. "If you thought it was really him for a second what does that say about him?"

Yet hundreds of Facebook users are sharing the screenshot as if it were true. Just to make sure, we checked Trump’s real Twitter page to see if he has tweeted about Gillum in connection to Dorian. He hasn’t.

The Facebook post is not accurate and makes a ridiculous claim. We rate it Pants on Fire!