Facebook posts
stated on August 5, 2020 in a video:
The FBI raided a “Cleveland office linked to Ukraine. Biden, Pelosi, Kerry and Romney all had sons getting tens of millions of dollars from no-show jobs in Ukraine.”

One post was published by a Facebook page called Q Pin on Aug. 5. "Q" is a reference to QAnon, a baseless conspiracy theory that claims the Trump administration is investigating members of the "deep state" for their involvement in pedophile rings.

The post includes a screenshot of a tweeted video that shows FBI agents going through boxes in an office.

"The FBI raiding a Cleveland office linked to Ukraine," reads a caption on the video. "(Joe) Biden, (Nancy) Pelosi, (John) Kerry and (Mitt) Romney all had sons getting tens of millions of dollars from no-show jobs in Ukraine."

The post was flagged as part of Facebook’s efforts to combat false news and misinformation on its News Feed. (Read more about our partnership with Facebook.) It has been shared more than 17,000 times, and we found similar versions shared by other QAnon-related accounts. 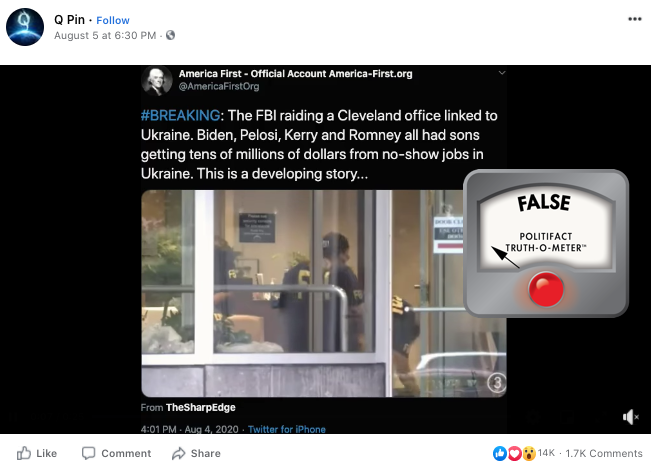 The footage in the video comes from news coverage of a recent FBI raid in downtown Cleveland. But what does that have to do with Ukraine? And how are American politicians involved?

In short: They aren’t. Let’s break it down.

On Aug. 4, agents with the FBI and the Internal Revenue Service raided offices in Miami and Cleveland that belong to Optima Management Group LLC. Optima is a Miami investment company that has properties across the country.

The raid was part of a money laundering investigation that’s been going on for more than a year.

"The affidavit is under seal so I cannot provide any specifics regarding the investigation," FBI Special Agent Vicki Anderson said in an email. "I can say no one was taken into custody. This continues to be an ongoing investigation."

Next: the Ukraine connection.

The Cleveland Plain Dealer reports that Optima is partially owned by principals of the Privat Group, a large business group based in Ukraine. One of those principals is Ukrainian oligarch Igor Kolomoisky

Instagram posts
stated on November 7, 2022 in Instagram post
Image shows that the New Mexico secretary of state counted more than 17 million registered voters in a state with a population of about 2 million.

In the early 1990s, Kolomoisky founded PrivatBank. It became a key banking institution in the country, serving about half of Ukraine’s population.

In 2016, the government nationalized the company, claiming that it did not have enough capital to support its loan portfolio. The Financial Times reported that PrivatBank lent billions of dollars to Kolomoisky associates.

In April 2019, the Daily Beast reported that the FBI was investigating Kolomoisky — who no longer owns PrivatBank and reportedly lives in Israel — for potential financial crimes, including money laundering. The U.S. Attorney’s Office in the Northern District of Ohio was also part of the investigation since Kolomoisky has investments there.

In early August, the Justice Department accused Kolomoisky of stealing billions of dollars from PrivatBank and using an array of companies around the world, including some in the United States, to launder the money. Kolomoisky’s lawyer has denied the allegations.

But how is all that related to Ukraine more broadly?

President Volodymyr Zelensky is a former comic, and Kolomoisky owns the TV station that used to air his show. Kolomoisky is considered to be a Zelensky ally.

Which brings us to the third part of the Facebook post: the connection — or lack thereof — to American politicians.

In 2019, a phone call with Zelensky was the subject of President Donald Trump’s impeachment. The investigation was prompted by a whistleblower’s complaint about the July 2019 call, during which Trump asked Zelensky to investigate the Biden family’s dealings in Ukraine.

Hunter Biden served as a board member for Burisma, a Ukrainian energy company, from 2014 until the spring of 2019. He did so when his father, then-Vice President Joe Biden, was representing U.S. policy on the country.

There’s no evidence to suggest that the sons of Kerry and Romney ever held similar positions. We rated a similar claim False in October 2019.

Pelosi’s son, Paul, once served on the board of an American energy company, Viscoil, that dissolved and re-formed in Singapore under a different name. It’s unclear to what extent the company has done business in Ukraine, but Paul Pelosi had no part in the new entity.

It’s correct to say that a company linked to Ukraine was recently raided by the FBI. But there is no evidence that the sons of Biden, Pelosi, Kerry and Romney got "tens of millions of dollars from no-show jobs in Ukraine." They are all unrelated to the ongoing investigation of Kolomoisky’s alleged money laundering.

The Financial Times, "Ukraine takes needed steps to clean up its banks"

The Washington Post, "Ukrainian who made appearance in Trump impeachment saga accused by U.S. of stealing, laundering billions," Aug. 6, 2020