Instagram posts
stated on February 14, 2020 in a meme:
Photo shows Bernie Sanders at the 1969 Stonewall riots.

Democratic presidential candidate Sen. Bernie Sanders, I-Vt., organizes a picture with supporters who marched with him in the Nashua Pride Parade in Nashua, N.H., on June 29, 2019. (AP)

Some Instagram users are misrepresenting an old meme to try and make Sen. Bernie Sanders look like a gay icon.

A post published Feb. 14 by @indiesauce claims to show the Democratic presidential candidate at the June 1969 Stonewall riots. It depicts a man in a black turtleneck standing alongside four women. 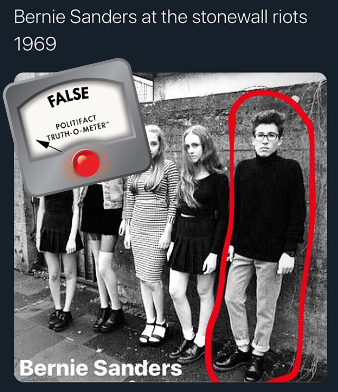 The post was flagged as part of Facebook’s efforts to combat false news and misinformation on its News Feed. (Read more about our partnership with Facebook, which owns Instagram.) It has more than 7,700 likes.

The Stonewall uprising was a series of confrontations between police and LGBTQ people outside the Stonewall Inn, a gay bar in New York City. It is viewed as the catalyst for the modern gay rights movement and the reason that Pride celebrations are typically held in June.

No one knows who threw the first brick at Stonewall, but it definitely wasn’t Sanders.

The Instagram photo does not depict the Vermont senator, nor does it depict the Stonewall riots — it’s a meme that’s been around since at least 2015. It originally served as a way to make fun of hipsters and Tumblr users.

Sanders is no stranger to protests, though; he was arrested in 1963 during a civil rights demonstration in Chicago. He also has a history of advocating for gay rights. But there’s no evidence that Sanders was at the Stonewall riots.