Facebook posts
stated on February 20, 2020 in an image:
“Bernie Sanders wants free health care for all and was asked how he would pay for it. His answer was raise taxes to 52% on anybody making over $29,000 per year.”

On Facebook, several conservative pages are trying to use math to discredit Sen. Bernie Sanders’ plan to raise the minimum wage and provide universal health care to all Americans.  But they need to double-check their work.

One Feb. 20 post published in a Bill O’Reilly fan page shows some calculations of Sanders’ plans. It cites a proposed $15 federal minimum wage that Sanders, I-Vt., brought up during the Feb. 19 Democratic presidential debate in Las Vegas.

It also cites Sanders’ Medicare for All plan, a single, national health insurance program that would cover everyone who lives in the United States.

The Facebook post claims the plan would put an undue tax burden on minimum-wage workers, making Sanders’ proposed pay increase pointless. "Bernie Sanders wants free health care for all and was asked how he would pay for it. His answer was raise taxes to 52% on anybody making over $29,000 per year," the image reads. "Math. It’s fascinating." 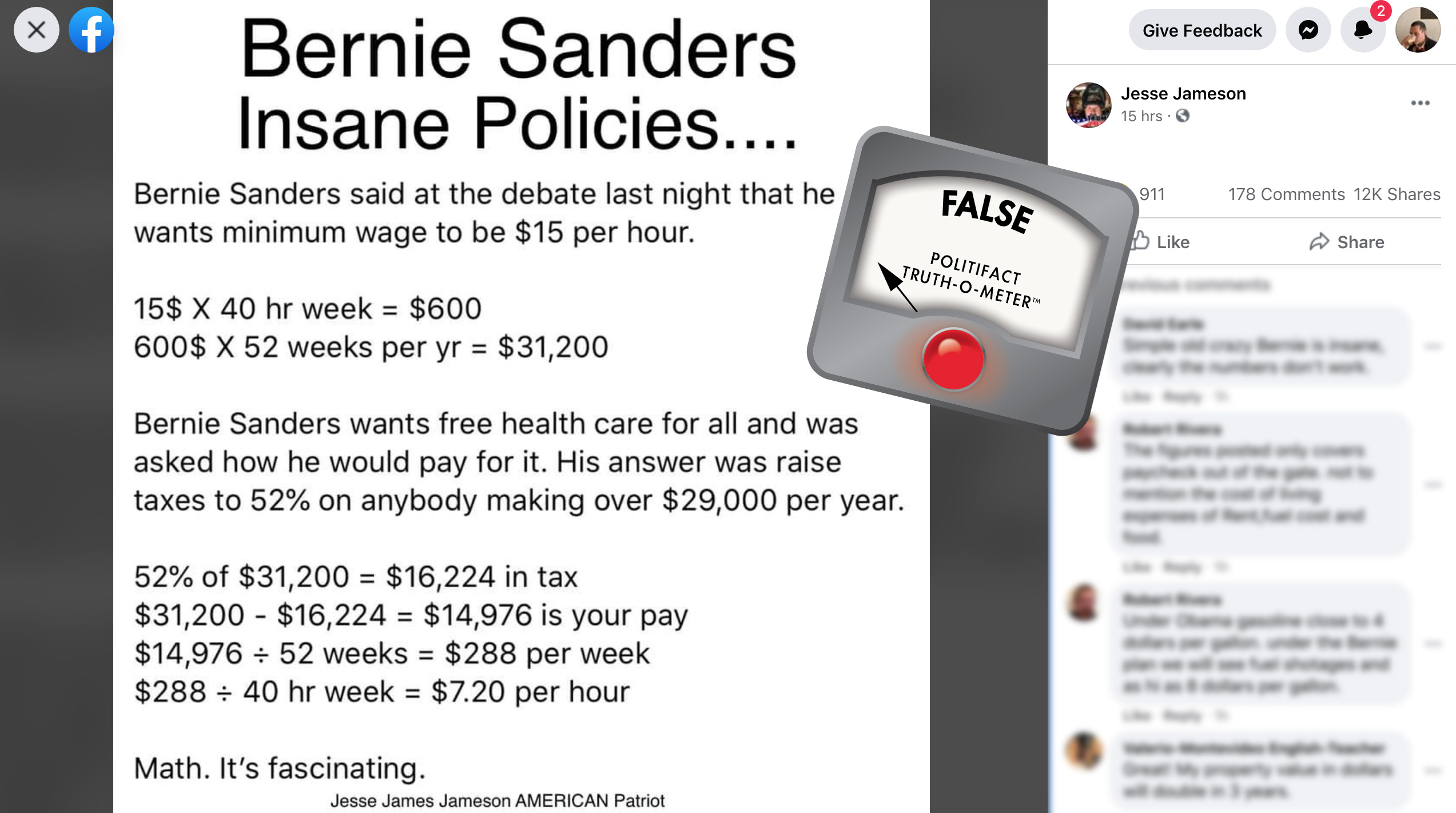 The post was flagged as part of Facebook’s efforts to combat false news and misinformation on its News Feed. (Read more about our partnership with Facebook.) It has been shared more than 15,000 times and copied by several popular pro-Trump Facebook pages.

We reached out to the user who originally posted the image, but we haven’t heard back — probably for good reason: The post makes some pretty fundamental errors both understanding Sanders’ plans, and the U.S. tax system.

Sanders first introduced Medicare for All, which would cover every American’s medical bills completely, in April 2019. According to the Urban Institute, the health care plan would increase federal spending by $2.8 trillion in 2020, and $34 trillion over 10 years.

To pay the health care proposal, Sanders has proposed a variety of different options to help cover the cost — including tax rate increases for the wealthy.

RELATED: What you need to know about Medicare for All

Under one of those options, the marginal income tax rate would increase for Americans making more than $250,000 per year. Incomes above $10 million would be taxed at 52%.

The tax rate would be lower for people who earn less money.

For single minimum-wage workers, the marginal income tax rate would stay at 12%, assuming current federal tax brackets remained the same if Congress passed a $15 minimum wage. The rate for married couples that jointly file taxes would increase from 10% to 12%, assuming their total household income is $31,200.

Another one of Sanders’ proposed ways to pay for Medicare for All is a 4% income-based premium paid by households. A single person making minimum wage would pay $752, nowhere near the $16,224 that the post said.

In short, Sanders doesn’t propose a 52% tax rate for any income close to what people make at a minimum wage job. In addition, tax filers are entitled to a standard deduction ranging from $12,400 for a single filer to $24,800 for a married couple. That means people would only pay tax on income earned over that amount. Other deductions or tax credits could lower someone’s tax liability further.

Tax Policy Center, "The Story Of Medicare For All And Taxes Is Complex, But Warren And Sanders Have To Tell It," Oct. 17, 2019

The Urban Institute, "From Incremental to Comprehensive Health Reform: How Various Reform Options Compare on Coverage and Costs," Oct. 16, 2019