Since late 2019, social media users have been sharing posts urging people to call 911 at the sight of a white van with external locks on its doors and hatches.

"If you see any vans like this call 911," says a Nov. 22 Facebook post, which shows an image of a white van with external locks on its side door and hatch. "This is utilized for sex trafficking."

Human trafficking is a legitimate threat that affects millions of people. But while it’s possible that some human traffickers have used white vans to kidnap their victims, there’s generally no way to predict what type of vehicle a trafficker or other criminal would drive.

More to the point, there’s no evidence that white vans with external locks are an especially common getaway ride for kidnappers. Like a pair of similar hoaxes we debunked related to zip ties and sex trafficking, this post seems alarmist. 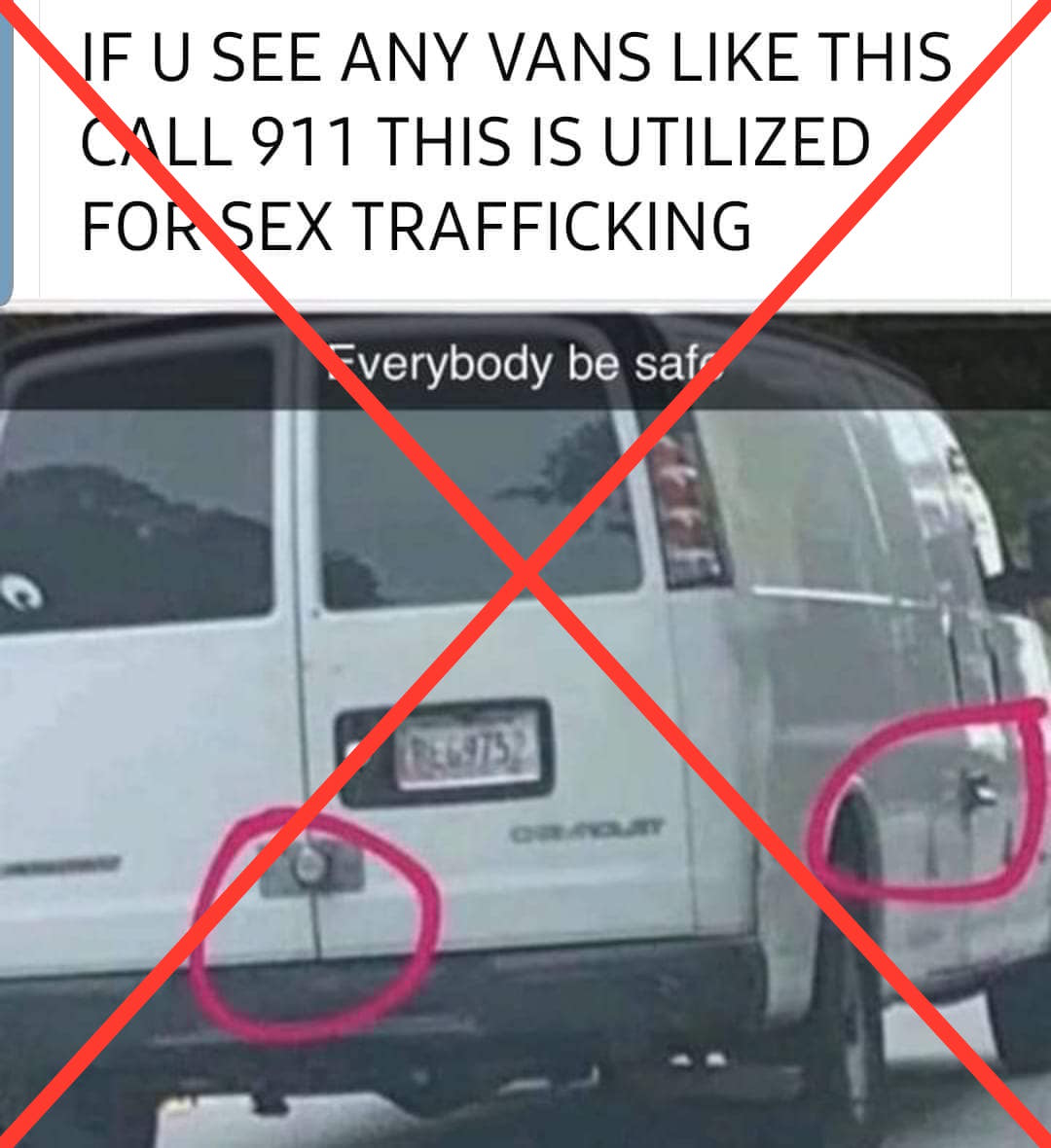 A screenshot of a viral Facebook post warning that white vans with external locks are used by sex traffickers.​

When we searched news archives, we didn’t find a swarm of reports about human traffickers who used external locks to trap people inside their white vans and drive away.

Instead, we found a number of reports — from fact-checkers as well as local and national news outlets — that debunked viral Facebook posts that were fooling people into believing most white vans belonged to sex traffickers.

Some outlets, like Lead Stories, knocked down posts claiming white vans with external locks are the vehicle of choice for sex traffickers, noting that such locks are widely available for sale online and commonly used by workers who use expensive tools on the job.

Others dealt with similar posts that warned about white vans more generally. These posts reportedly took off after Baltimore Mayor Jack Young issued a warning about white vans that he claimed, without evidence, were "trying to snatch up young girls for human trafficking."

Young said he got word of such incidents from Facebook rather than from the Baltimore Police Department, which later told reporters it had no reports of actual incidents that involved sex traffickers driving white vans with external locks.

A number of white-van owners have reported being harassed since posts associating their vehicles with sex trafficking have cropped up, according to Business Insider.

The FBI declined to comment when we asked if incidents involving white vans were frequent or if white vans with external locks presented any particular reason for concern.

But Robert Lowery, vice president of the National Center for Missing and Exploited Children, told Yahoo News that "of the 420,000 missing children last year, there were around 30 or 40 physical abductions that involved, for example, grabbing them in public."

"Although that’s too many and it does happen, these scenarios are rare," he said.

In a statement to PolitiFact, the Polaris Project, a nonprofit organization that works to combat human trafficking, said it hasn’t identified white vans with external locks as a trend.

Human trafficking often occurs between people that know each other, rather than complete strangers, and people being trafficked aren’t always physically restrained, locked away or held against their will, the group said.

"By far the most pervasive myth about human trafficking is that it always — or often — involves kidnapping or otherwise physically forcing someone into a situation," the Polaris Project said in its statement. "In reality, most human traffickers use psychological means such as tricking, defrauding, manipulating or threatening victims."

Shared Hope International, a nonprofit Christian organization with a similar mission, told us that "trafficking victims are generally not kidnapped or taken away from their families abruptly."

"Many people don’t realize sex trafficking exists in their community, but it impacts people everywhere," the organization said. "Those who are concerned about sex trafficking and want to prevent people from being exploited should start by educating themselves and getting the facts."

It’s important to stay aware of your surroundings, and should you want to report or seek services related to a case of human trafficking, you can contact the National Human Trafficking Hotline at 1-888-373-7888 or email [email protected].

CNN, "A Facebook rumor about white vans is spreading fear across America," Dec. 4, 2019