As millions of Americans celebrated Christmas, some Facebook users were sharing a made-up story about Lee Majors.

The Dec. 25 article, which was published by AJUAnews.com, claims Majors died from complications during a Penuma surgical procedure. (Penuma is a kind of penile implant.) It also claims the actor, who has starred in movies like "The Six Million Dollar Man" and "Scrooged," left $6 million for President Donald Trump’s re-election campaign in his will.

The story was flagged as part of Facebook’s efforts to combat false news and misinformation on its News Feed. (Read more about our partnership with Facebook.) It has been shared more than 6,000 times. 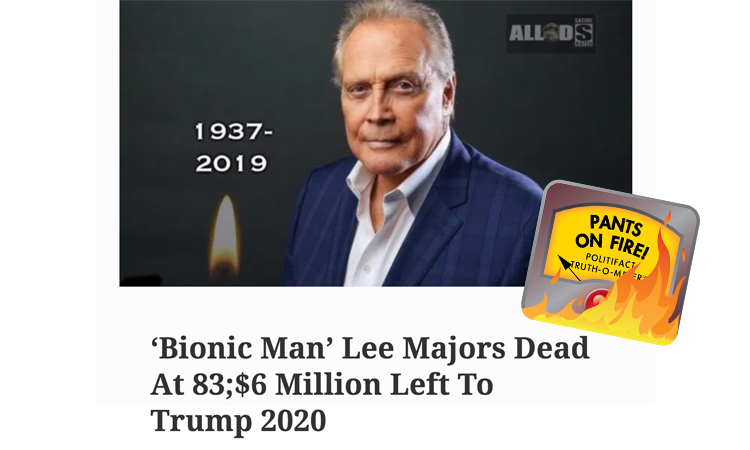 AJUAnews is a hoax news site that has a track record of republishing false, satirical stories without their original context. It also tries to redirect readers to links for anti-virus software they don’t need.

The original source of the article about Majors is a website called Conservative Tears. It’s run by Christopher Blair, a liberal who tries to trick conservatives into sharing made-up stories on social media. A lot of AJUAnews’ content appears to come from Blair’s network of sites.

The story on Conservative Tears has several satire labels — including a "Death Hoax" tag — while AJUAnews’ version does not. Facebook users and pages have also shared the latter with the assumption that it’s real.

Majors has been cast in an upcoming movie called "Narco Sub," which is in pre-production for release in 2020. No news outlets have reported that he’s dead.