Instagram posts
stated on July 18, 2020 in an image:
“Since Trump labeled ANTIFA a terrorist organization their rights were stripped by the Patriot Act which states if someone is labeled a terrorist they are not afforded due process.”

You may have heard that federal officers in unmarked vehicles have detained people protesting against police brutality in Portland. According to some reports, officers have given no explanation for the arrests.

"Here is what is going on since Trump labeled ANTIFA a terrorist organization their rights were stripped by the Patriot Act which states if someone is labeled a terrorist they are not afforded due process," reads the July 18 post. "PS: Obama suspended habeas corpus too!"

The post was flagged as part of Facebook’s efforts to combat false news and misinformation on its News Feed. (Read more about our partnership with Facebook, which owns Instagram.) 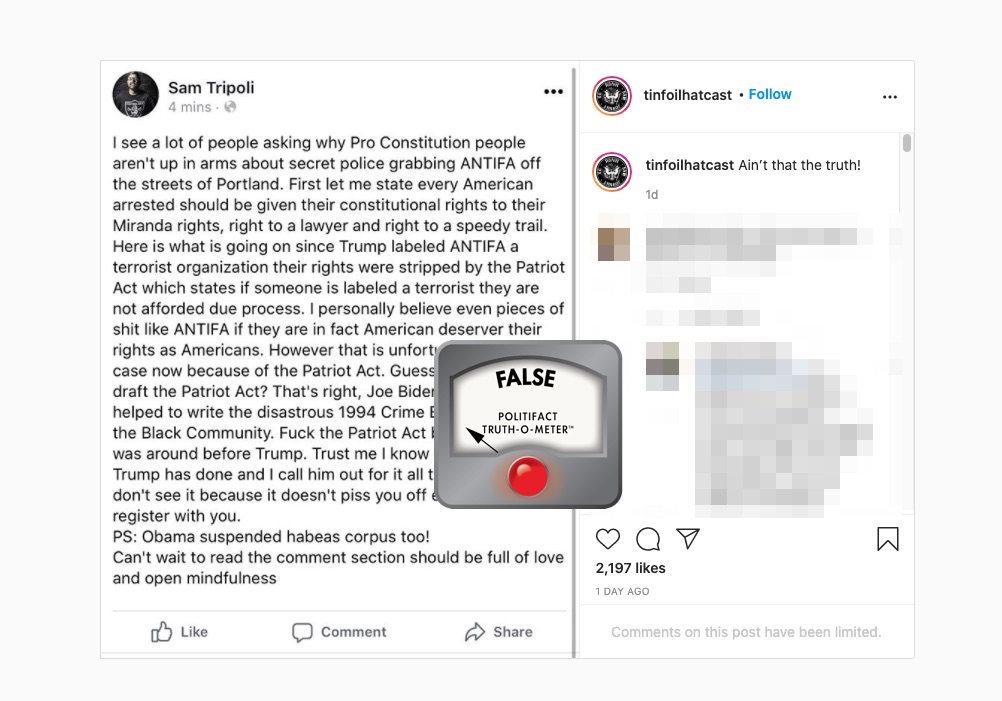 Antifa stands for "anti-fascist." It’s a broad, loosely affiliated coalition of left-wing activists that’s been around for decades, but has had a resurgence since the election of President Donald Trump.

The Trump administration has repeatedly blamed antifa activists for the violent protests that erupted after the death of George Floyd in late May. There’s no evidence that antifa played any significant role, but Trump said May 31 that the United States would designate the movement as a terrorist organization.

The post is inaccurate. Antifa is not a designated terrorist organization, and even if it were, American activists would still have due process rights.

Also, antifa is not a structured organization — it has no leaders and is organized into autonomous local groups.

Viral image
stated on November 3, 2022 in an Instagram post
The media reported on “5 TikTok dances you can do to help Ukraine fight Russia.”

"It’s a little bit like feminism," Mark Bray, a historian and part-time lecturer at Rutgers University, told PolitiFact. "There are feminist groups just like there are antifa groups, but neither feminism nor antifa is a group."

Second: If antifa groups were designated terrorists, American activists would still have due process rights thanks to the Fifth and Fourteenth Amendments.

The Patriot Act, which passed after the Sept. 11, 2001, terrorist attacks, does not give federal officers the right to detain suspected terrorists who are U.S. citizens without probable cause. The legislation mainly expanded law enforcement’s ability to use wiretaps in counter-terrorism investigations. It was re-authorized and revised in 2015 to place limits on how much telecommunication data intelligence agencies can collect from Americans.

What’s going on in Portland?

If antifa isn’t a terrorist organization, then why are law enforcement officials detaining protesters in Portland? It has to do with the federal government’s response to ongoing protests over police brutality.

Demonstrators in Portland have been protesting against police brutality and racism against Black Americans since the death of George Floyd in late May. On July 14, reports surfaced that federal law enforcement agents were using unmarked cars to detain protesters in Portland. Over the next few days, videos shared on social media showed the detentions.

Federal agents in Portland include members of the U.S. Marshals Special Operations Group and a unit from U.S. Customs and Border Protection. U.S. Border Patrol told CNBC that agents were deployed to Portland in support of a June 26 executive order from Trump and a new Homeland Security task force for protecting American communities.

The Trump administration says the officers are needed to restore peace in Portland, where protests devolved into rioting July 18. But Oregon officials and Democrats have criticized the federal government’s crackdown.

The Oregon attorney general filed a lawsuit July 17 that alleges the federal government violated citizens’ rights by detaining them without probable cause. On July 19, House Democrats called for an investigation into allegations that federal officials were unlawfully arresting protesters. Portland Mayor Ted Wheeler, Oregon Gov. Kate Brown and U.S. Sen. Jeff Merkley — all Democrats — have criticized the Trump administration’s use of force against protesters.

It’s unclear to what extent antifa activists are among the protesters detained in Portland. The city is home to the oldest antifa cell in the country, and activists associated with the movement have been involved in recent protests there. One purported antifa activist faces charges for alleged crimes that took place during the demonstrations.

The Instagram post claims that, since antifa is a terrorist organization, its members’ due process rights are stripped by the Patriot Act.

Antifa is not an organized group and has not been designated as a terrorist organization. Even if it were, American antifa activists would still have due process rights afforded to them by the Constitution. The Patriot Act does not give federal law enforcement officials the right to detain suspected terrorists who are U.S. citizens without probable cause.

CNBC, "House Democrats call for an investigation into Trump’s use of force against protestors in Portland," July 19, 2020

CNN, "What the US government can and cannot do to US citizens suspected of terrorism," Sept. 20, 2016

Department of Justice, Highlights of the USA PATRIOT Act