Facebook posts
stated on November 2, 2020 in a series of images and screenshots:
“If Biden wins the election, there are people out there planning on mass murdering poc and lbgtq+ people. Please stay inside during the election and a few days after.”

The Election Day warning went viral on all the social media platforms.

It was a frightening admonition to "stay inside on Election Day and a few days after" because people are planning to "mass murder" people of color and those within the LGBTQ community if Democratic presidential nominee Joe Biden wins against President Donald Trump.

The posts give an appearance of being well-intentioned, urging people in those groups to stay home and, in some versions, to "stay safe."

They were flagged as part of Facebook’s efforts to combat false news and misinformation on its News Feed. (Read more about our partnership with Facebook.)

These broad claims have the characteristics of disinformation intended to spread fear and discourage certain people from going out to vote. So while it may be packaged as a word of caution, experts say some social media users are unknowingly sharing a false message. 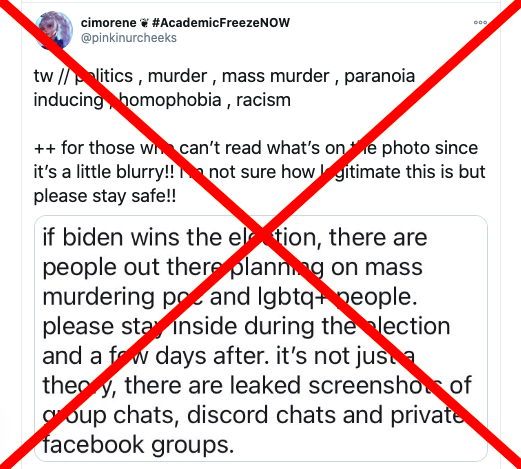 Federal officials have warned some law enforcement agencies to be aware of legitimate threats of violence related to the election. But these frightening, non-specific social media claims that assert targeted mass murder is brewing seemed aimed to suppress the vote, said Paul Barrett, author of the paper, "Disinformation and the 2020 Election: How the Social Media Industry Should Prepare."

"People should not just be suspicious of such posts; they should reject them as obviously false and designed exclusively to frighten social media users and keep them from voting," said Barrett, also deputy director of New York University’s Center for Business and Human Rights.

A PolitiFact analysis of the evolution of the message about Trump supporters "mass murdering" people suggests it originated on Snapchat and TikTok before moving to Twitter just after midnight on Nov. 2.

The first tweet we could find with an image of that message was published around 12:45 a.m. Eastern Standard Time. The account that posted it was created in June and was quote-tweeting another post that included an image of what looked like screenshots of several similar messages on platforms like Snapchat and TikTok.

"If Biden wins the election, there are people out there planning on mass murdering poc and lgbtq+ people," says text in the image. "Please stay inside during the election and a few days after. It’s not just a theory, there are leaked screenshots of group chats, Discord chats and private Facebook groups."

We could find none of that material to support the claim in the post. Subsequent versions of the message claimed without evidence that the Proud Boys, a far-right men’s organization with a history of violent confrontations, was planning to mass murder people if Biden wins the election.

Many of the tweets we found repeat the same language offering a trigger warning. Darren Linvill, a disinformation expert and associate professor at Clemson University, told PolitiFact the tweets appear to have originated among teenagers in the Philippines.

"I think this is all teen drama," he said. "We looked at several accounts, and they all seem legitimate. There is a lot of cutting and pasting, and while that is concerning it isn't that uncommon."

From Twitter, the message appears to have jumped to Instagram, where the same screenshot warning was first posted around noon on Nov. 2. Similar posts have received hundreds of thousands of likes and comments, according to CrowdTangle, a social media insights tool.

Sarah Oates, professor and senior scholar in journalism at the University of Maryland, specializes in studying Russian disinformation. She said it’s hard to know at this point whether the posts are being spread by people who want to intimidate individuals or whether they’re sincerely worried.

"There are certainly reasons for people in these groups to feel threatened and they have been the victims of hate speech, attacks, and murder due to their status," she said. "People should look at the material and really consider — by sharing this am I sharing useful information or am I contributing to a campaign of terror against a marginalized group?"

RELATED: What you need to know about Election Day misinformation

"Voter intimidation has partially moved online and especially on Election Day, it is very prudent to be very suspicious about the trustworthiness of any communications suggesting that eligible voters should stay away from the polling stations," said Niklas Myhr, a marketing and economics professor at Chapman University in Orange, Calif., who specializes in social media.

"Some of these posts can also be discarded based on simple logic. Why should you not go and vote if these bad things are supposed to happen only after the results have been tallied?"

We reached out on the afternoon of Nov. 3 to the FBI and the Department of Justice about the posts. We didn’t get a reply from the Justice Department and the FBI said it had no comment.

We could find no evidence that Trump supporters or the Proud Boys are planning mass murder if Biden wins the election.

A series of social media posts claim that Trump supporters and right-wing groups are "planning on mass murdering poc and lgbtq+ people" if Biden wins the election.

There is no evidence to support that. The claim appears to be a viral social media rumor, and experts say they show hallmarks of being part of a campaign to suppress the vote. While law enforcement agencies nationwide are bracing for post-election unrest, we could find no credible threats of "mass murder."

Without additional evidence, the claim is inaccurate. We rate it False.

Email, New York University Center for Business and Human Rights deputy director Paul Barrett, author of the paper, "Disinformation and the 2020 Election: How the Social Media Industry Should Prepare," Nov. 3, 2020

Email, Sarah Oates, professor and senior scholar in journalism at the University of Maryland, Nov. 3, 2020