Tweets
stated on November 4, 2020 in a post:
“40,000 rejected vote by mail ballots in DeKalb County need to be cured by Friday or they will be tossed.”

An election personnel examines a ballot as vote counting in the general election continues at State Farm Arena on Nov. 4, 2020, in Atlanta. (AP)

As election workers continue to count mail ballots in Georgia, a tweet that falsely claims tens of thousands of mail ballots in Atlanta may be invalidated has gone viral.

"40,000 rejected vote by mail ballots in DeKalb County need to be cured by Friday or they will be tossed (mismatch signature, etc.), verify your ballot status," says the Nov. 4 tweet, which was shared more than 39,000 times before it was deleted.

DeKalb County covers a swath of eastern metropolitan Atlanta that overwhelmingly voted for Hillary Clinton in 2016. As of 5 p.m. EST on Nov. 4, an estimated 11% of votes remained to be counted there, and the Associated Press has yet to call Georgia for either President Donald Trump or former Vice President Joe Biden.

Several readers sent us the tweet and we’ve seen similar claims on Instagram, so we wanted to check it out.

The post is inaccurate — the DeKalb County Board of Registration and Elections has debunked it. 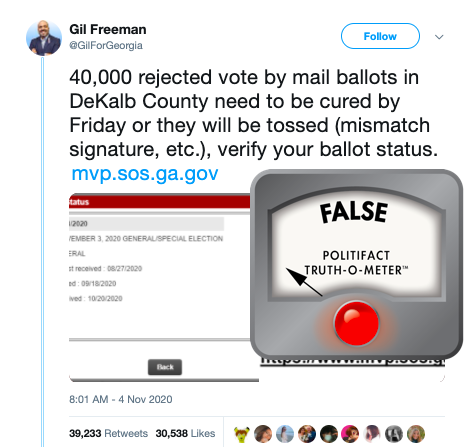 Jessica Huseman, a reporter who covers voting rights and election administration for ProPublica, offered more context in a tweet.

"This county had 170,856 mail ballots requested — 40K rejected would be insanely high for Georgia, which rejected only 1 percent of ballots during the primary," she said. "The secretary of state's office tells me they expect around 3,000 rejections across the whole state."

The confusion could stem from a statement that Georgia Secretary of State Brad Raffensperger gave to reporters on the morning of Nov. 4.

The New York Times, "Tracking Which News Outlets Have Called the Presidential Race in Each State," Nov. 4, 2020

Tweet from the DeKalb County Board of Registration and Elections, Nov. 4, 2020