Facebook posts
stated on November 15, 2020 in a screenshot:
A screenshot shows Tucker Carlson announcing he’ll “be starting at NewsMax next month.”

Avid viewers of Tucker Carlson’s nightly program on Fox News are in luck: The host is not leaving the network, despite rumors swirling on social media.

"The American people spoke their truth. Fox News is over," the screenshot says. "I’ll be starting at NewsMax next month."

"Good News," says a caption on the Facebook post. "TUCKER CARLSON IS MOVING TO NEWS MAX. WHERE THE TRUTH PREVAILS." 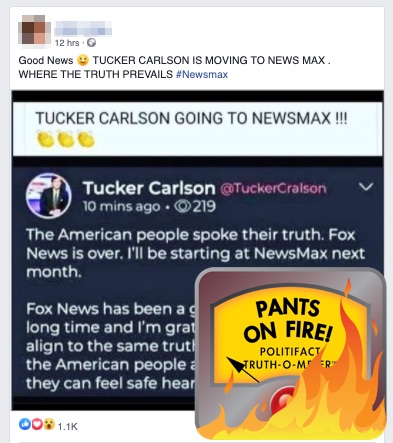 Since Fox News projected that Joe Biden would win the election against President Donald Trump, some conservatives have flocked to NewsMax, a conservative TV network that has not declared a winner. But Carlson is not leaving Fox News to join NewsMax — the Parler post is a fake.

The username in the fake Parler post is @TuckerCralson — not @TuckerCarlson, which is the host’s real Parler handle. The real Carlson has also not posted about leaving Fox News for NewsMax.

We reached out to Fox News for a comment, but it did not provide one on the record.

The fake Carlson Parler account was created five days ago and is listed as private. We couldn’t verify whether the false post was published by the account in the first place.

Since the election, Parler has seen an influx of users as mainstream social media platforms, such as Facebook and Twitter, crack down on political misinformation. According to Parler’s community guidelines, users may not make "any use of another’s name or likeness in a confusing or deceptive manner."

Still, several conservative politicians have recently been the target of fake Parler posts.

A screenshot posted on Facebook Nov. 13 made it look like Sen. Kelly Loeffler, R-Ga., said "Black people shouldn’t be allowed to vote" in a Parler post. A bogus profile for Mississippi Gov. Tate Reeves has also made the rounds on social media. Politico found several similar fake accounts for GOP officials over the summer.

"Don't assume screenshots from Parler are real," said NBC News reporter Ben Collins in a Nov. 15 tweet. "You can change the name of your account to impersonate whoever you want over there."

We reached out to Parler for a comment, but we haven’t heard back.

Politico, "GOP officials flock to Parler social network. So do their trolls and impostors," July 2, 2020