Tweets
stated on October 13, 2020 in a videos, articles and screenshots:
Says Joe Biden and Barack Obama “directly participated in a plot to have #SealTeam6 MURDERED, then arranged a massive cash deal as part of a cover up.”

President Barack Obama salutes as he is greeted by Col. Mark Camerer, the 436th Airlift Wing Commander, left, as he steps off of Marine One, at Dover Air Force Base, Del., on Aug. 9, 2011. (AP)

President Donald Trump retweeted a baseless claim that former President Barack Obama and Vice President Joe Biden killed a team of Navy SEALs and covered it up. The allegation has roots in a QAnon-supported conspiracy theory about the 2012 attack in Benghazi, Libya.

"Hiden Biden and Obama may have had Seal Team 6 killed!" wrote the Twitter account, which was created in July.

Trump amplified the claim in a retweet of the post Oct. 13. Some took that as confirmation.

"Potus confirms with a retweet the intel that current presidential candidate and former Vice President, Joe Biden, directly participated in a plot to have #SavelTeam6 MURDERED, then arranged a massive cash deal as part of a cover up," one account wrote on Parler, a website that has likened itself to a conservative version of Twitter.

A screenshot of that post then made the rounds on Facebook, where similar claims have been shared thousands of times, according to CrowdTangle, a social media insights tool. Several readers messaged PolitiFact asking if the claims were true. 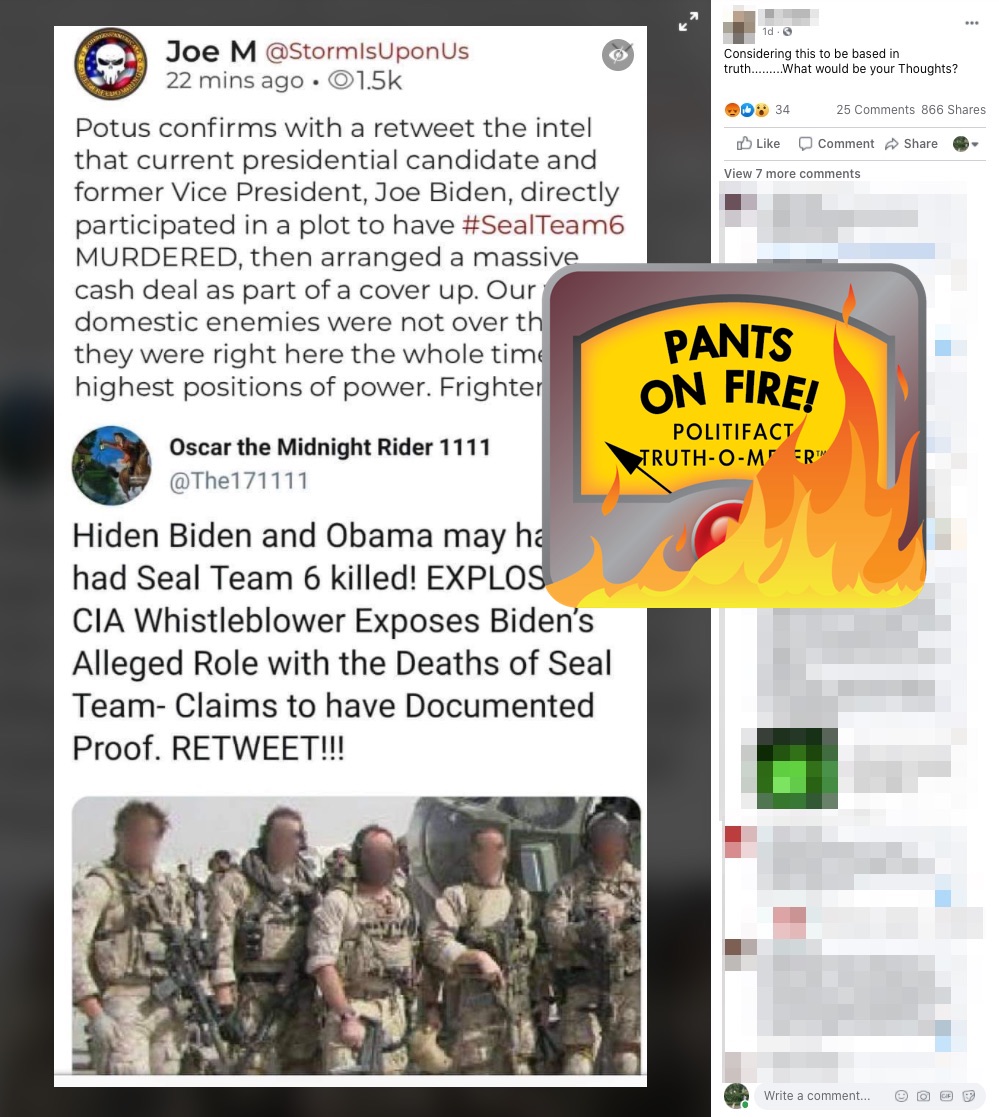 Some of the posts were flagged as part of Facebook’s efforts to combat false news and misinformation on its News Feed. (Read more about our partnership with Facebook.)

There is no evidence that Obama and Biden conspired to have a team of Navy SEALs killed. Multiple fact-checkers and media outlets have debunked the claim.

But where did this conspiracy theory come from — and how do we know it’s false? We took a closer look.

Trump’s retweet gave airtime to a new conspiracy theory about the 2012 attacks in Benghazi, Libya, the death of Osama bin Laden and a 2011 helicopter crash in Afghanistan. Its source is the unsubstantiated claims of a falconer.

The article shared in the post that Trump retweeted was published by a conservative political website called DJHJ Media. The site is owned by David James Harris Jr., a Texas entrepreneur and Trump supporter.

DJHJ Media’s article is based on an interview with Allan Harrow Parrot, whom the website says is a "CIA whistleblower." The video was tweeted Oct. 11 by Anna Khait, a former contestant on the reality TV show "Survivor."

The video shows Parrot speaking virtually with Nick Noe, a conservative personality, and Charles Woods, the father of Tyrone Woods, a Navy SEAL who died in a 2012 attack on an American diplomatic compound in Benghazi. The attacks have been the subject of numerous false claims and conspiracy theories, as well as several congressional investigations.

The video was played at the American Priority Conference, an event held at Trump’s resort in Miami. In it, Parrot floated a new conspiracy theory related to Benghazi. Here’s a quick summary:

Parrot claims that the Obama administration made a deal with Iran to stage the death of Osama bin Laden, the mastermind of the Sept. 11, 2001, terrorist attacks, in Pakistan. But Iran double-crossed the United States and swapped bin Laden for a body double, and Iran extorted billions from the Obama administration in exchange for keeping quiet. To cover its tracks about the raid, the administration ordered a Navy SEAL helicopter to be shot down. That’s a reference to a real event from 2011, when 15 members of SEAL Team Six died in a helicopter crash in Afghanistan.

"Vice President Biden paid with the blood of Seal Team 6," Parrot said in the video. "He spent their blood like currency."

What does that conspiracy theory have to do with Benghazi? Later in the video, Noe says Benghazi was attacked to cover up the American origin of the missile used in the helicopter attack.

Parrot, who was the subject of a 2010 documentary about international falconry, said he has "terabytes of documents, video, audio" that prove his theory is correct. We reached out to Parrot and Noe to see the evidence, but we haven’t heard back.

Since the conspiracy theory took off on social media, the writer of the DJHJ Media article about Parrot has since distanced herself from some of his claims.

"For the record, anyone following my #SEALTeam6 articles, I have no proof that the Whistleblower's claim (sic) are true, but I am suspicious, of course, I am," she tweeted Oct. 13.

The Obama administration did not order the deaths of the 15 SEAL Team Six members who died in 2011. They were killed by insurgents during an assault on a Taliban compound.

On Aug. 6, 2011, 38 people — including 30 American troops, 15 of whom were SEAL Team Six operators — died after insurgents downed their helicopter during an operation in the Tangi Valley. The CH-47D Chinook military helicopter, operating with the call sign Extortion 17, crashed during an attempt to reinforce a Joint Special Operations Command unit.

It was the deadliest day for American troops during the war in Afghanistan — and it came three months after other SEAL Team Six members carried out the raid that resulted in the death of bin Laden.

Ed Darack, author of "The Final Mission of Extortion 17," wrote in a 2015 piece for Air & Space magazine that the timeframe gave birth to numerous baseless conspiracy theories about the crash. In his 2017 book about the crash, Darack addressed theories specifically about the Obama administration’s alleged involvement.

"The most egregious media reportage transcended the merely ignorant and pushed into maliciousness," he wrote. "This small number of theories, often politically motivated or at least tainted, suggested the absurd: that the Obama administration had the SEALs intentionally targeted."

RELATED: 7 ways to avoid misinformation about the election

Darack wrote that, based on two military investigations — one conducted by U.S. Central Command and one by the Joint Combat Assessment Team — there is no evidence to back that allegation up.

In the former report, known as the Colt Report, Army Brig. Gen. Jeffrey Colt led a team of investigators that inspected the helicopter wreckage, reviewed documents associated with the crash and interviewed eyewitnesses. He concluded that the helicopter "was shot down with a rocket-propelled grenade (RPG) fired by a Taliban fighter as the helicopter neared its landing zone."

"The Colt Report correctly identified the sole cause of the downing: a lucky shot," Darack wrote in "The Final Mission of Extortion 17."

What about the other two components of Parrot’s conspiracy theory: that the Obama administration paid Iran and coordinated the Benghazi attacks?

Billions of dollars in Iranian assets were unfrozen following the Iran nuclear deal in 2015, but they weren’t a payout. In 2016, the Obama administration sent a $400 million pallet of cash to Iran as part of a resolution to a decades-long financial dispute over the sale of military parts. There’s no evidence the money was part of a plan to extort the U.S.

The final report of the House Select Committee on Benghazi outlined how a mix of local extremist groups, including Ansar al-Sharia and several al-Qaeda-linked groups, were likely behind the attack that resulted in the death of J. Christopher Stevens, the American ambassador to Libya, and three other U.S. citizens. The investigation did not find evidence that the Obama administration somehow coordinated the attack.

We reached out to the Biden campaign for a comment on the conspiracy theory that Trump shared, but we haven’t heard back.

Claims that Obama and Biden "directly participated in a plot" to murder members of SEAL Team Six are wrong.

The conspiracy theory hinges on one man’s unproven assertions about the 2012 Benghazi attacks, the death of bin Laden and the 2011 crash of the Extortion 17 helicopter in Afghanistan.

There is no evidence to support those assertions. Two military investigations concluded that Extortion 17 crashed after a Taliban fighter shot a grenade at it. The investigations did not uncover a government plot to kill Navy SEALs.

The statement is inaccurate and ridiculous. We rate it Pants on Fire!

Clarification Oct. 20: Anna Khait no longer contributes to the Epoch Times, the publication says. An earlier version of this story was unclear on that point.

Lead Stories, "Fact Check: Obama And Biden Did NOT Conspire With Iran To Stage Bin Laden Killing, Or Silence SEAL Team 6 By Shooting Down Helicopter," Oct. 13, 2020

PolitiFact, "Fact-checking Benghazi: The rhetoric hasn't matched up with reality," May 16, 2014

U.S. Department of State, Statement on the Deaths of Tyrone S. Woods and Glen A. Doherty in Benghazi, Libya, Sept. 13, 2012

U.S. House of Representatives, FINAL REPORT OF THE SELECT COMMITTEE ON THE EVENTS SURROUNDING THE 2012 TERRORIST ATTACK IN BENGHAZI, Dec. 7, 2016

The Washington Post, "The conservative alternative to Twitter wants to be a place for free speech for all. It turns out, rules still apply." July 15, 2020